There are some ethnic lobbyist organizations in the US, one of them is Armenian National Committee of America (ANCA)

The main task of this entity is to organize and coordinate the Armenian lobbying activity and promote Armenia’s interests. Another mission is opposition, and, even small obstructions against Turkey and Azerbaijan.

The primary source of finances of this organization – donations and contributions of Armenians from the US. Raffi and Aram Suren Hamparians, two relatives, are the Heads of the organization. Part of the funds can lines their pockets. We can say that ANCA is their family business. That’s why these people are so interested in anti-Azerbaijani and anti-Turkish hysteria.

In light of the latest developments, ANCA has strengthened its catalytic role in the spread of hysteria. The prime example of propaganda and hysteria – Twitter account of ANCA. If we analyze the messages of ANCA, we can see that they actively exploit the following things: 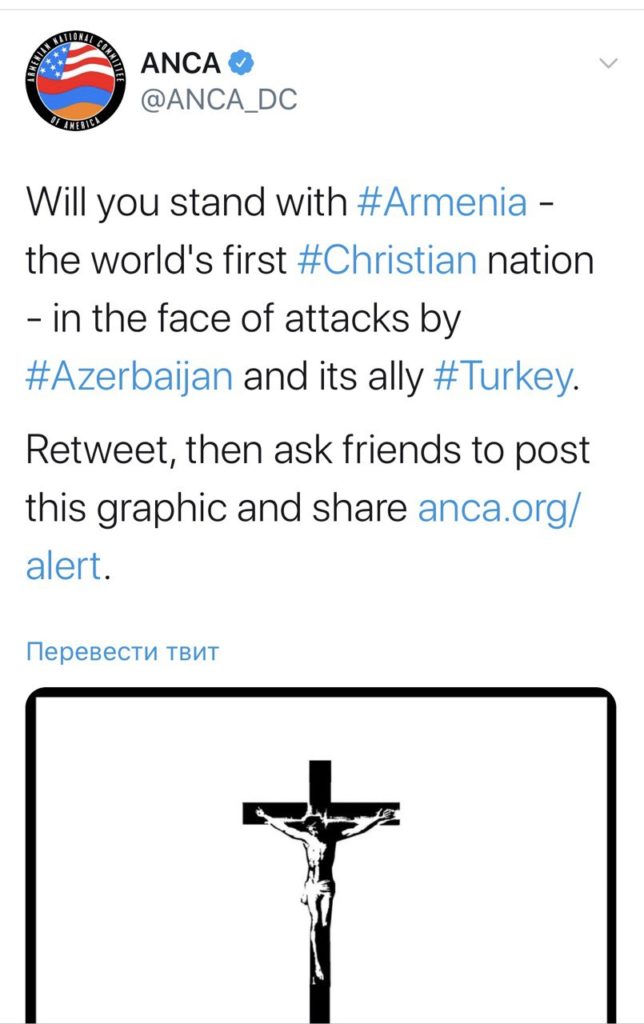 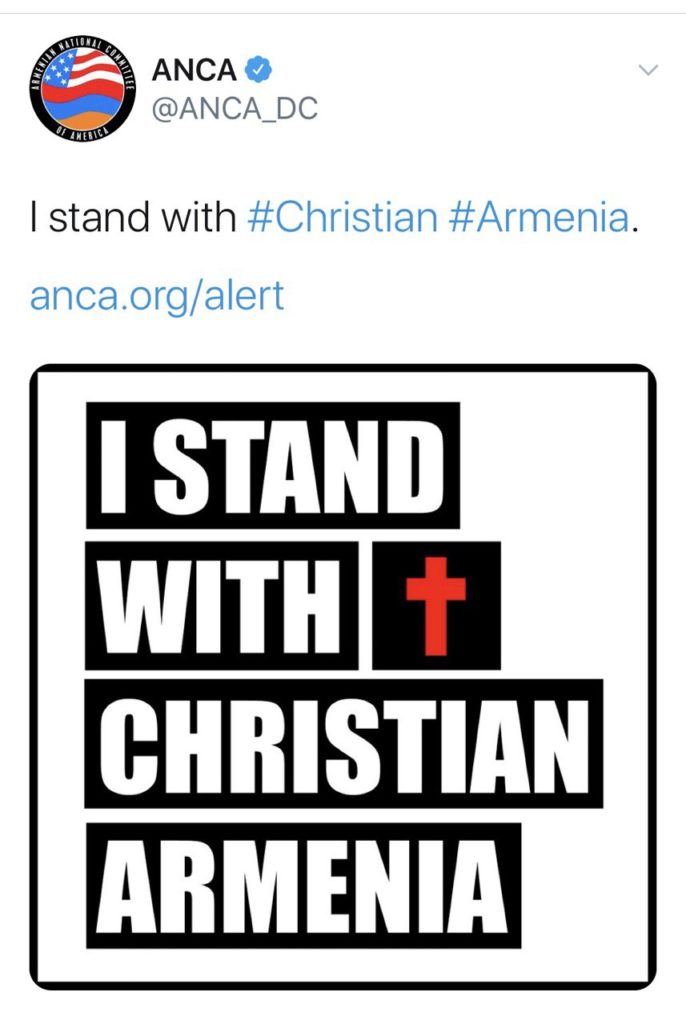 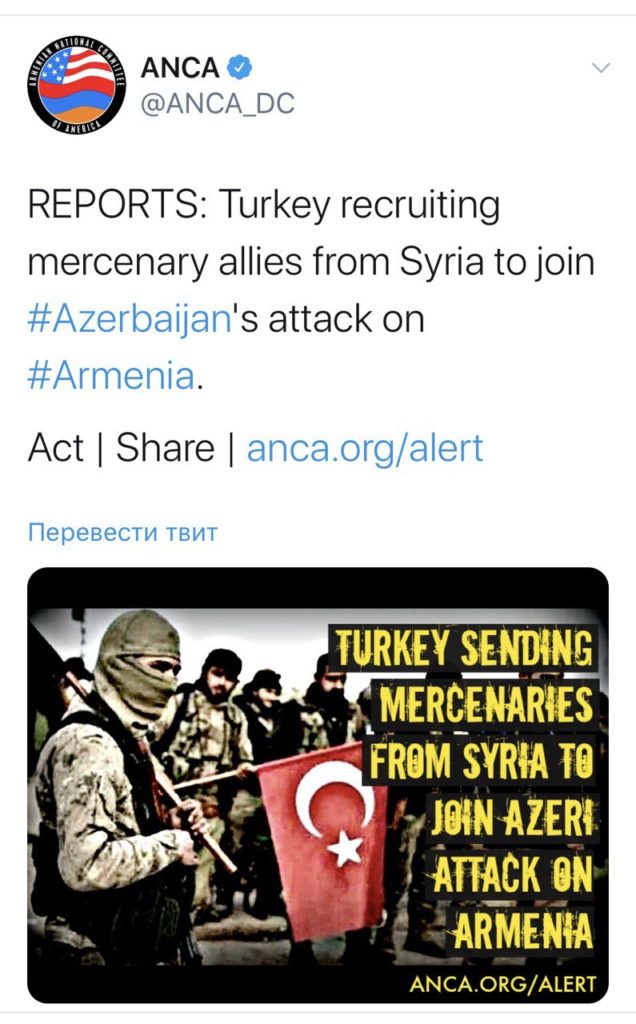 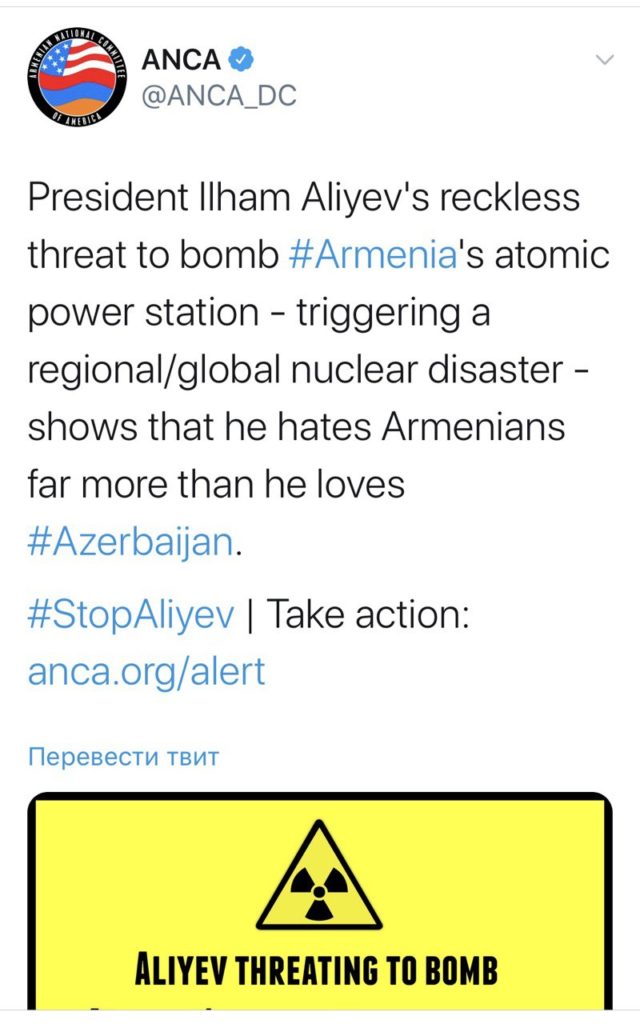 Let’s briefly review the talking points with which ANCA scares the world and Armenians.

1.The Karabakh conflict has never had a religious character. It is not the first time, when the Armenian side, begins to use the religious factor, in attempts to gain the support of Christian circles in the US and Europe

Azerbaijan is a secular country, where members of all confessions live in peace.

2. In Karabakh’s military actions in 2016, Armenian propaganda concocted the myth that the ISIL terrorists were fighting on the Azerbaijani side. No serious sources didn’t believe that, except for certain pro-Kremlin Russian outlets. That’s why I think that current fabrications are just the continuation of the 2016 fantasies.

3.In this matter, the Armenian side refers to the statement of the head of the press-service of Azerbaijan’s Ministry of Defense. In response to the Armenian side’s permanent threats to bomb the Mingachevir Dam and flood, the whole central part of Azerbaijan, the head of the press-service, recalled Armenia their Nuclear Power Plant and a possible attack on it. This statement is spread by the ANCA and some western outlets, at the behest of the Armenian lobby. However, they don’t say that the Armenian side has been threatening to bomb the Mingachevir Dam. Another important point – the decision to attack Armenia is taken not by the Head of the Press-Service.

Obviously, ANCA’s current bosses were inspired by the style and legacy of Mourad Topalian, who was involved in terrorist activity, while being the Head of this organization. ANCA is probably the only ethnic lobbyist organization in the US, the head of which was involved in terrorism. Either way, ANCA would not attract people from “Armenian power” (Armenian criminal organization and street gang located in Los Angeles and its suburbs) and sympathizers of the ASALA (Armenian terrorist organization), to beat Azerbaijanis on the US streets. I understand there is a surreal picture – members of syndicate took to the streets of the US cities to beat those who protest. But this is the reality, we are dealing with.

In conclusion, we have faced rough propaganda in the style of Nazy Germany, and that brings to mind the words of the colleague of misters from ANCA Joseph Goebbels “We are seeking effect, not truth”.

Armenian Lobby: “As long as there are Serge Sargsyan and Karen Karapetyan, it is not worth even to visit Armenia”

Sargsyan is a liar and drug addict

Be the first to comment at "ANCA – They are seeking effect, not truth"