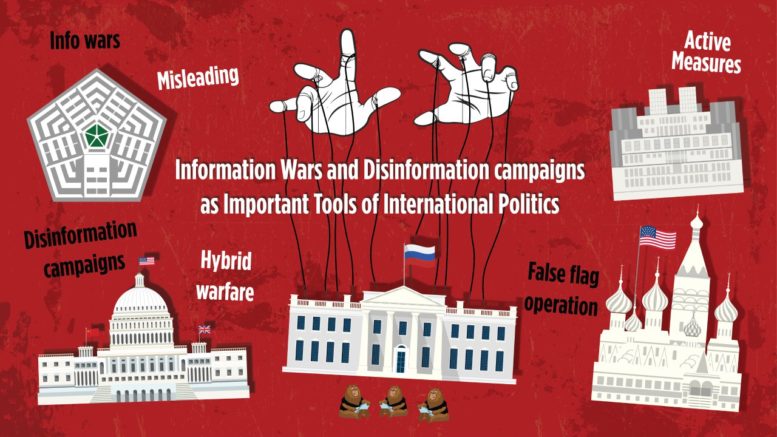 People tried to manipulate each other since ancient times, and various methods were used for these purposes, such as fear of curses, natural forces, higher powers (gods, religion), or deliberate spread of rumors/false information, in order to mislead the opponents or strike terror into their hearts, etc.

During the Cold War, the parties would stoop to anything; the KGB invented a story according to which “AIDS was created by the Americans,” and the CIA, in turn, financed publication of the novels by anti-Soviet authors. I am not even talking about projects such as Radio Free Europe / Radio Liberty.

But now, in the age of the Internet and social networks, “information war” and “psychological operations” obtained such tools that they have never possessed before. It is safe to say that the means for waging information warfare and conducting psychological and disinformation operations have not only gone far ahead, but practically achieved perfection.

Never before in the entire history of humankind people and organizations, involved in the process of information warfare, possessed such a large set of tools.

I disagree with those who argue that the Cold War ended in 1991, in my opinion the Cold War was paused in 1991 and resumed in the mid-2000s.

But there are certain changes of the actors of the Cold War, or rather wars; if in the past the Cold War was a confrontation between two camps, two systems, and two ideologies, in which the USSR and the United States were the main antagonists, now it is multifaceted. Moscow and Washington are still opponents and are some of the main actors in the new Cold War. But at the same time, we also have China (China-US confrontation) and Iran (Iran-Israel/US/Saudi Arabia confrontation), and I cite just the examples that influence global politics, leaving aside predominantly regional powers.

New technologies, artificial intelligence, methods of automated data analysis, on the one hand, facilitate the task for people / organizations involved in the information warfare or “active measures” in the information field, on the other hand, they help significantly reduce the expenses. Now a group of 7-8 analysts with laptops, who have an Internet connection, a couple of hundred dollars to buy paid content, and some operational skills, can do in one week the same amount of work that was done 20 years ago by a large department of an intelligence service of an average NATO country in a couple of months, both in the field of collecting and analyzing information and in the field of “active measures” in the information space.

Facebook alone (as well as Instagram) provides within a couple of minutes an extremely detailed information on almost every country or a group of countries in the world, for collection and analysis of which it was previously necessary to employ a sizable personnel of analysts and field agents. The same applies to services such as FlightRadar, Marinetraffic, Google Ads Tools, Google maps, Google Street View, Wikipedia, and more.

I believe special mention should be made of the “lucky” Cambridge Analytica who managed to collect data of almost 50 million Facebook users. Unfortunately, or fortunately, not everyone has such an advantage.

Although social networks take a number of measures to limit or even prevent their use for manipulation and disinformation purposes, loopholes always remain. These loopholes always coincide with the painful subjects of society, for example, many Western media write about “Russian interference in the American elections”; many understand interference as hacker attacks, but few pay attention to the activities of the Russian “Troll Factory”, and even fewer specialists and journalists pay attention to how successfully the “Russian trolls” pinpointed the problems of the American society, acting on the principle “where something is thin, that’s where it tears” (social inequality, racism, inadequacy of social elevators, rift between the right and the left). I would say that these directions are much more important for Moscow than the momentary success of a certain candidate in the elections. During the Cold War, the KGB operated in the United States and carried out intensive activity, i.e. Moscow already had experience of operations in the American information field, but social networks and the Internet provided a strong impetus and great opportunities. The majority of Western experts and journalists who write about the “Russian troll factory” do not know the specifics of Russia and how this system works in Russia. Fortunately for the Americans, however, Moscow was and remains limited in staff and finances. With a sufficient number of staff and finances, without a doubt, the Russians could have achieved much more, and not only on the American and European, but to a certain extent also in the South American information space. 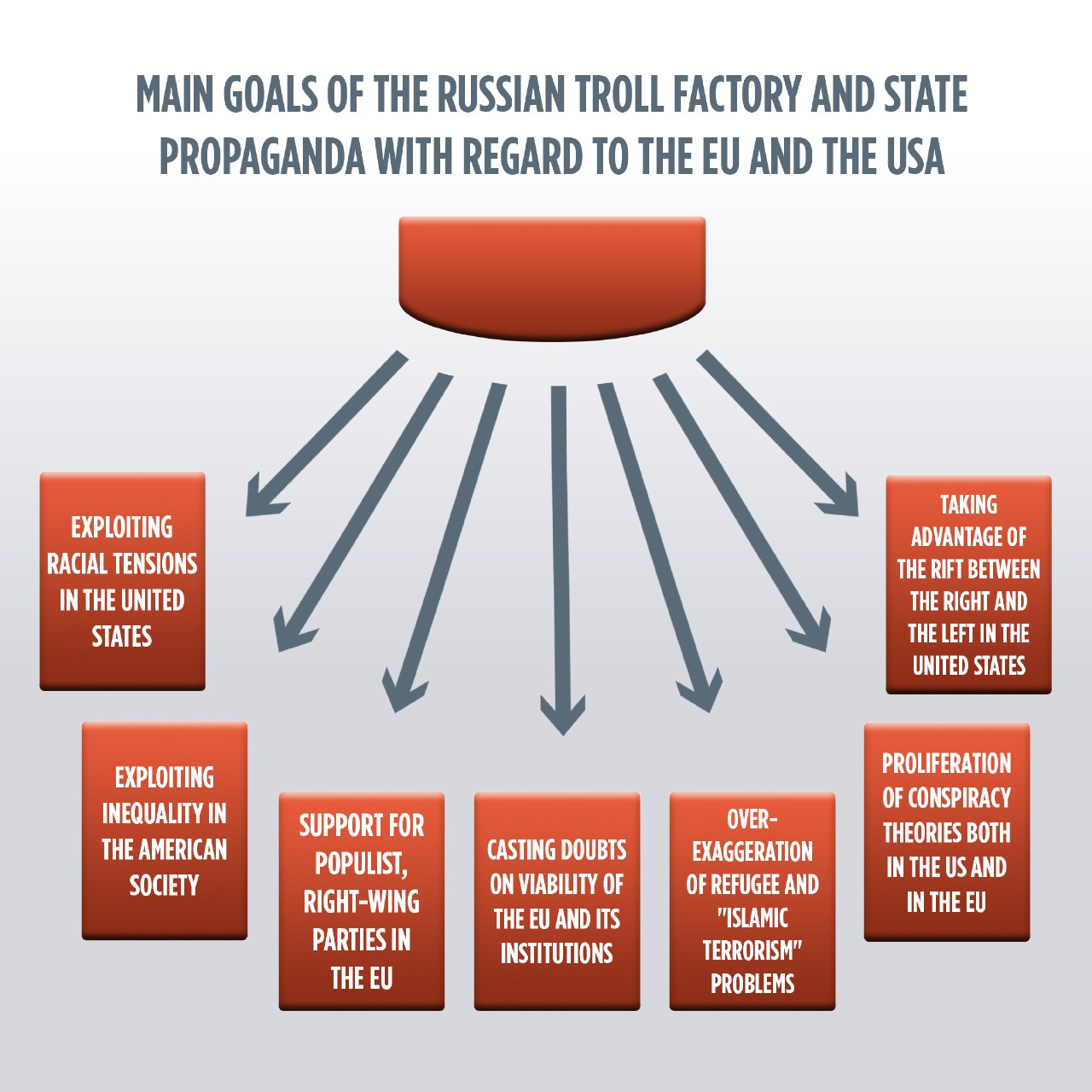 Many believe that only the special services of certain countries resort to this kind of methods, but this is by no means the case. Various political parties, terrorist or semi-terrorist organizations, businesses and some influential and wealthy individuals can also resort to the information warfare, psychological operations, manipulation of public opinion, etc.

Large corporations, for example, Russian or Middle Eastern oil and gas producing companies, can afford having their own departments that are engaged in intelligence, counterintelligence (not to be confused with Competitive Intelligence), can organize and manage large-scale operations for manipulation of public opinion (and not only in their own country), and of course they have a wide range of operational capabilities (including technical means of tracking and encrypted communication), except maybe the possibility of making legal arrests. Large corporations can easily lure secret service operatives and analysts (local and foreign) to their service to acquire hardware and software for surveillance and hacking. In turn, the material obtained by surveillance (including surveillance with the use of technical means), as well as by hacking, is then used in information operations against competitors or enemies. There are also those that lack the means to maintain their own departments or “information troops” (corporations, governments, political groups), and they often resort to the help of mercenaries. Usually, Western firms disguised as “PR agencies” act as such mercenaries, operating outside the jurisdiction of their own countries, and performing as full-fledged information troops, while their activity goes far beyond PR.

One can cite the example of the British company Bell Pottinger, whose actions almost caused a civil unrest in South Africa.

In my experience, there were cases when one company simultaneously served two opposing camps, while the clients were not aware of that.

I believe that the use of mercenaries is not always an effective method, because mercenaries are not always familiar with local specifics and realities. They often try to apply one or two successful cases to every situation. But it is possible to combine the strengths of foreign mercenaries and local specialists. With the right approach, a very effective hybrid mechanism could be created.

Through my work on the project tgme.org and within my PR agency, I have dealt extensively with issues of information warfare and detection of disinformation and manipulation operations. For the most part these were operations, conducted against my country, friendly countries or organizations, or Iranian operations directed at the Greater Middle East. My country has been in a permanent state of information warfare for almost 30 years, as interests of various regional and global players intersect here. On the one hand, this creates difficulties for us in the fight with information attacks and manipulations, but on the other hand, it gives us a unique chance to study the methods and approaches of all the players, as they say, “without leaving the house.” 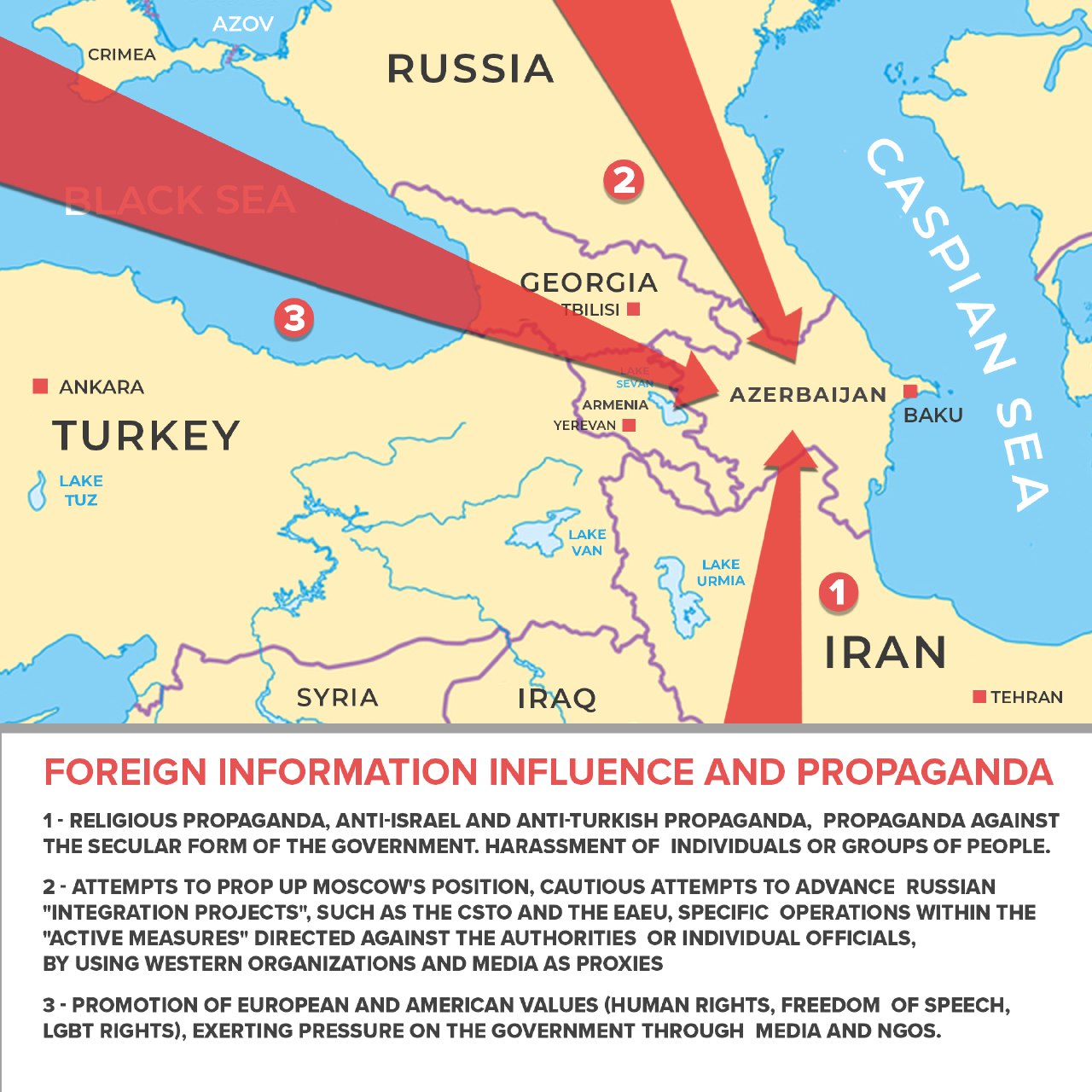 In the information warfare, it is necessary to learn a couple of important lessons. Firstly, the side that appeals only to the truth and real facts may have less space for maneuver, because it is limited solely to the truth and facts. It should be taken into account that if the facts are on your side, it does not necessarily mean that you will prevail in the information war.

Secondly, “starting the game first”, “shouting first”, “taking the first step” gives a serious tactical advantage, which could be increased, if no strategic mistakes are made. Those who hesitate often lose precious time, thereby giving their enemies more time for preparation and mobilization.

Thirdly, availability of staff and resources. I saw how the parties that got involved in the information wars motivated just by the principle “we are right, therefore we will win” ended in fiasco, because they lacked professionals, clear understanding, flexibility and means to wage such wars. Getting involved in a war relying on a faith in the rightness of one’s cause is a fairly common phenomenon, and if you are in such a situation, I advise you to think twice. If the truth is on your side, but you lack the resources, do not forget that your opponents, who have the resources and experience, can create an “alternative truth”.

Staff and resources are two very important elements. Sometimes one is available, but the other one is missing. In particular, state organizations often suffer in terms of staff. Typically, talented and experienced specialists either do not seek employment in governmental institutions, or leave after reaching a certain level there. Brain drain and weak motivation for attracting new staff are perhaps the main reasons why the government or individual governmental organizations are forced to outsource some projects in this field.

Fourthly, timely detection. Timely detection of the elements of “psychological operations”, “deliberate manipulations”, “attempts to inject information infection” is almost half the battle for successful defense (of course, if resources are available). Often individuals, governments, organizations that became targets of well-thought-out psychological / information operations, have a small, almost illusory chance to identify at early stages the operation against them. One of German philosophers once said a brilliant phrase: “Randomness is an unknown pattern”. When there is a sign, post or video on social networks, an article on an unknown site, a stupid at first glance report on a small TV channel, the “victim / victims” may consider it to be nonsense, a coincidence and not pay much attention. But this “mere coincidence” could be a harbinger of something big. When the KGB started operation Infection, many specialists in the west did not notice the beginning of this operation, and later did not pay due attention, but as a result, there was a large number of people and activists, who trusted in truthfulness of this information and started to spread Soviet propaganda clichés themselves. 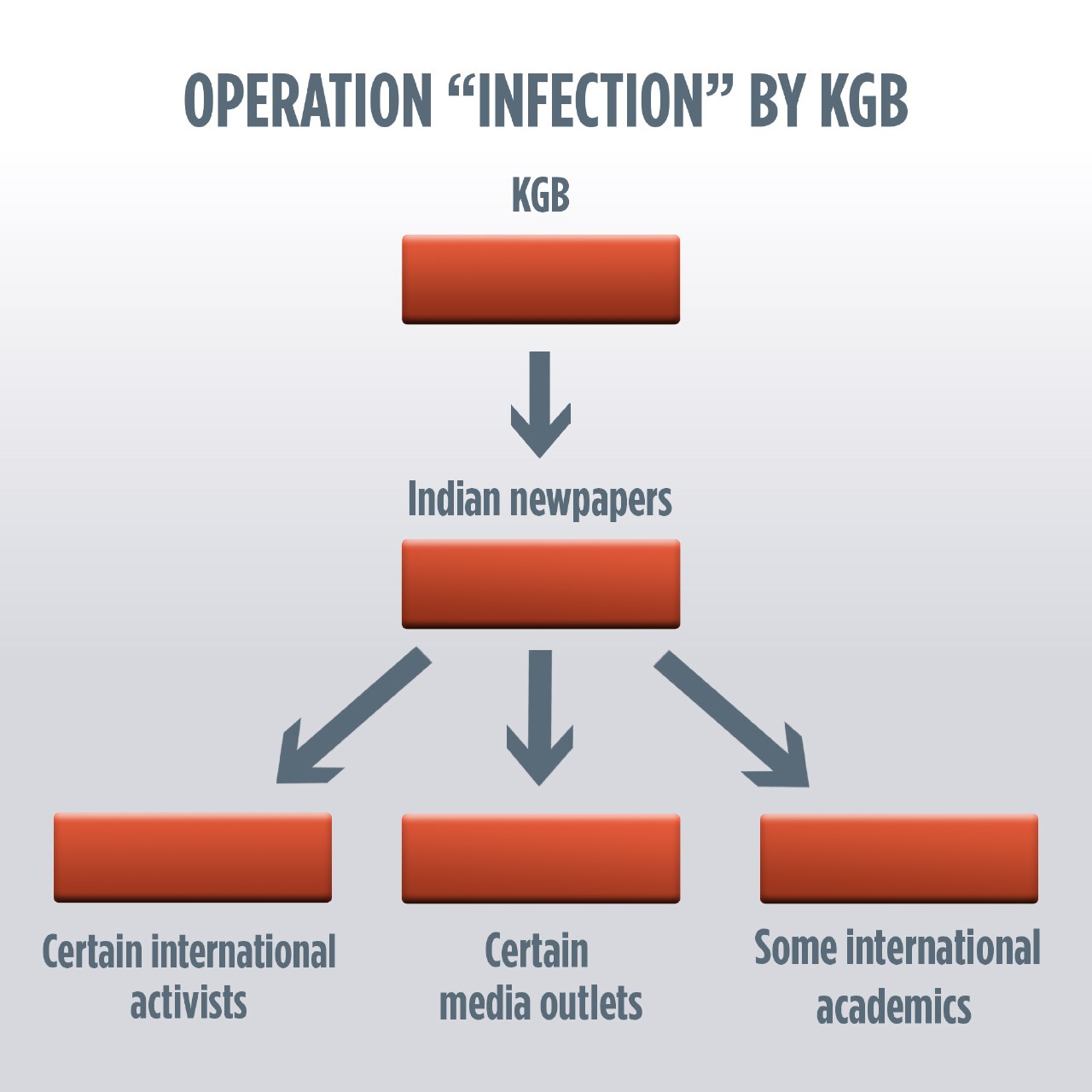 Certainly, there is plenty of other nuances that can vary depending on the situation, but obviously, it is not possible to cover everything in one essay.

In general, development and proliferation of the Internet and subsequently of social networks create for some opportunities for communication and making new connections, and provide for others the tools of influence and manipulation.

Countries handle this phenomenon in different ways; more advanced ones use the Internet and social networks to spread their own propaganda (do not think that only authoritarian regimes do it) and at the same time counteract the propaganda of other countries, while other governments, taking into account their scarce resources, try only to resist propaganda of their political opponents, ignoring, and sometimes not even comprehending information operations conducted by other countries in their information space. Of course, there are also those who resort to radical methods, such as blocking Internet resources and social networks that are undesirable for them At first glance, this radical method appears to be effective, but for experienced professionals it is a clear signal that the government that chose the method of blocking actually admits its helplessness in this issue, and that it cannot manipulate the information flow and counteract it. With consideration to availability of numerous ways of circumventing the blocks, the government, which was not able to build its own information warfare system, could, in the long run, fall victim to its adversaries/competitors, who are more patient and advanced in informational affairs.