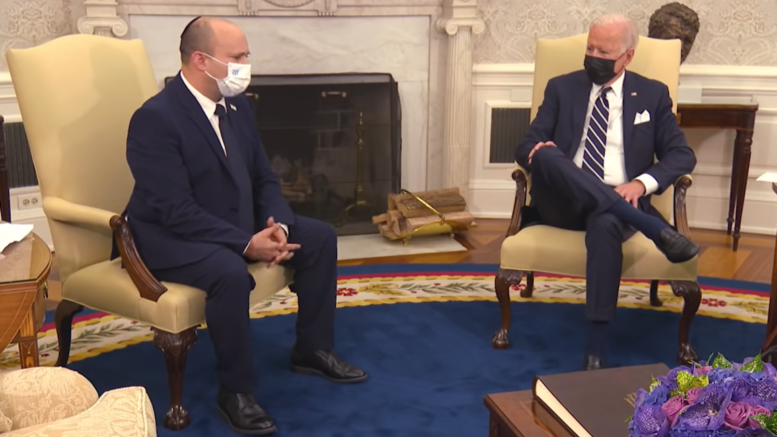 The Israeli Prime Minister’s trip to Washington DC last week showed how negotiation and diplomacy can be used to potentially solve the Iranian nuclear crisis, as Prime Minister Bennett met with President Joe Biden to discuss a range of mutually shared security concerns; chief among them was Iran.

As the incumbent Iranian President Ebrahim Raisi recently announced his pick for the country’s representative to the International Atomic Energy Agency, Mohammed Eslami, an aerospace expert previously linked in a UN report to Iran’s nuclear proliferation, the road ahead to a possible resumption of the Vienna talks looks increasingly rocky.

Such matters are impeded further still by the Supreme Leader Ali Khamenei recently lashing out at America and Europe for what he called their “excessive demands” and “outrageous behaviour”. Asking Iran to return to the negotiation table in return for ill-deserved sanctions-relief whilst causing deadly attacks on international shipping, can hardly be described as ‘outrageous behaviour’. At least not by any pragmatic head of state.

It is in this recent volatile barrage of words from Tehran that President Biden rightly asserted last week with Naftali Bennett that should negotiations with Iran fail, then they should explore a ‘Plan B’, and other policy options pertaining to continued Iranian nuclear proliferation.

Whilst these options will undoubtedly range from increasing economic sanctions, and even turning a blind eye to Israel’s grey-zone activities against Iran, a wider, more inclusive and regional dialogue should now begin to take place regarding a ‘Plan B’.

Whilst America’s and Europe’s regional allies Israel, Saudi Arabia, and the United Arab Emirates (UAE), were all side-lined during the Obama and Biden administration’s original negotiations with Tehran, any return to the nuclear table must include these important regional partners.

At the very least, holding bilateral talks between each heads of state, such as last week’s visit between Biden and Bennett and their senior foreign policy advisers, would reassure both America and Britain’s closest regional allies that their security concerns are shared by Washington and London.

Israel considers Iran its most important strategic threat, and in particular a nuclear armed Tehran is an eventually that Israel will never accept. Similarly, Saudi Arabia has keenly felt the threat from the Islamic republic over the ongoing conflict in Yemen and the Houthi insurgency, fuelled and paid for by Iran.

Meanwhile, the UAE faced threats from the Iranian leadership after diplomatic relations were normalized last year, in addition to the UAE facing continued Iranian aggression from illegal ship seizures of international maritime traffic off its coastline.

By incorporating these three regional powers into Iranian nuclear proliferation talks and dialogue, it would dramatically increase the legitimacy for any future tightening of sanctions or other such punitive measures taken by the international community, in a bid to ensure that Iran never becomes a nuclear power.

With a resumption of the stalled Vienna talks potentially on the horizon as summer gives way to fall, America needs all the help that it can muster in its attempts to curtail Iran’s unpredictable and fiery new regime.

Robert Clark is a Defence Policy Associate at the Henry Jackson Society. Prior to this he served in the British military for 13 years, including tours of Iraq and Afghanistan. He can be found on Twitter at @RobertClark87

De-escalation in the Korean Crisis: Implications and Future Effects on Iran and the Middle East