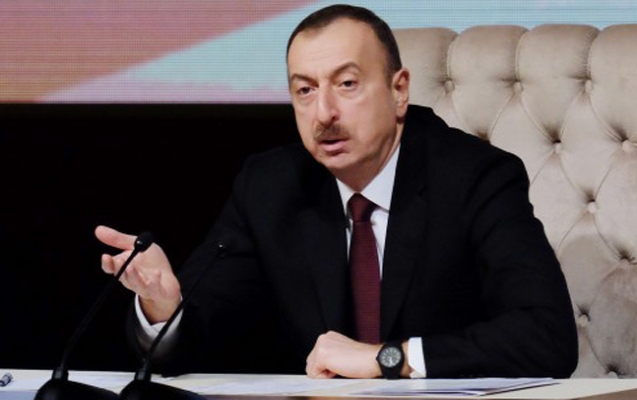 The settlement of the Nagorno-Karabakh conflict between Armenia and Azerbaijan is possible only within the territorial integrity of Azerbaijan, President Ilham Aliyev said.

“Azerbaijan is the victim of aggression and occupation by Armenia. Armenia doesn’t want to leave the occupied Azerbaijani territories – Nagorno-Karabakh and seven adjacent districts. Armed forces of Armenia must be immediately withdrawn from the occupied territories, Azerbaijanis have to return to their homes. The conflict must be resolved within the framework of UN resolutions, rules of international law and territorial integrity. Sanctions must be imposed on Armenia”, – Ilham Aliyev said on Thursday, speaking at the VI Global Baku Forum.

He added that Armenia has been violating UN Security Council Resolutions for more than 20 years.
According to him, the current status-quo in the conflict is unacceptable, as also recognized by the Heads of the OCSE co-chair countries (Russia, USA, France). “A change to the status quo is possible only through the return of our territories”, the President stressed.

I.Aliyev added that Azerbaijanis have inhabited Nagorno-Karabakh throughout the centuries. “Our historic and religious monuments on the occupied territories were destroyed. It was confirmed by OSCE, which dispatched two missions to these territories”, – the President emphasized.
“This conflict is not only the greatest injustice in the modern history it is also a source of persistent tension and instability in our shaky region. That’s why as soon as we settle this conflict on the basis of the norms and principles of international law, UN Security Council Resolutions and Helsinki Final act, peace will come to this region”, – the President of Azerbaijan said.

Tension in Azerbaijan-Armenian conflict : Azerbaijani girl and her grandmother became the targets and victims of Armenian atrocity

Be the first to comment at "Ilham Aliyev calls for sanctions against Armenia."