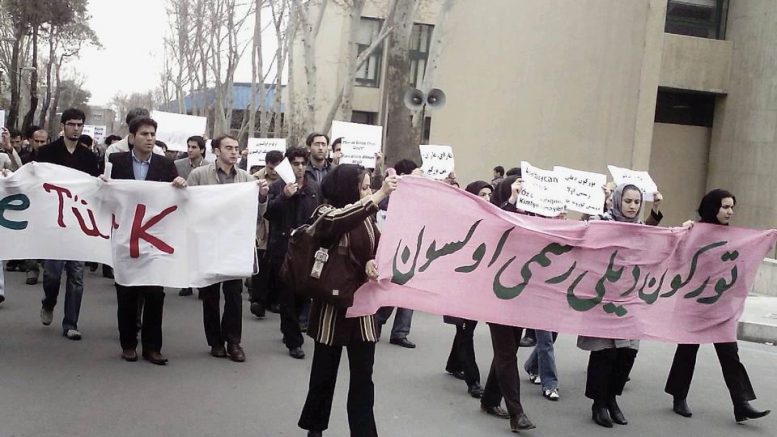 Iran is on the headlines of the Western media outlets. Newspapers, web-sites and TV channels devote great attention to Iran, its nuclear and missile program, Iranian threat and gross violations of human rights in the country.

In this article, I want to focus on human rights issue, in particular, on the rights of Azerbaijanis living in Iran.

By various estimations Azerbaijanis are the second largest nation, that inhabits Iran (areas with high concentrations of Azerbaijani people are often called Southern Azerbaijan). The number of Azerbaijanis in Iran is varying from 25 to 30 and more million people according to different sources. Anyway, it is about tens of millions of people, more people than the combined population of Norway, Sweden and Finland.

It is hard for people in the West to imagine this, but nevertheless in Iran this huge population lacks the most basic human rights, such as education in their mother tongue, mass media in their native language or even theatre and cinema. It is prohibited even to give their children Azerbaijani names and to bear Azerbaijani surnames. Azerbaijanis living in Iran can’t open a cafe, a shop or a company and give it a name in their native language or a name reminding of the owner’s ethnic origin.

Many school-age children lag behind their peers from other regions or leave school because education is provided in Farsi which they don’t speak well or even don’t know at all.  Education in Farsi is generally one of the tools, which was used by Shahs’ regimes and now is used by the Islamic regime to assimilate national minorities in Iran.

All these happen in the XXI century, despite that the Iranian constitution guarantees the rights of ethnic minorities living in the country. It is noteworthy that Kurds, Arabs, Baluchis and other nations that inhabit Iran also suffer from the racist policy of the Islamic regime.

Of course, the discriminatory policy of Iranian authorities is a cause for protests by Azerbaijani population of Iran, the Republic of Azerbaijan and other countries. However, all protests in Iran are brutally repressed by the authorities. Activists may be kidnapped and killed by the authorities. Torture, unlawful arrests, coercion to immigration, blackmail and other similar measures are favorite methods of the Islamic regime, used against Azerbaijani activists claiming their rights.

Alireza Farshi, Akbar Azad, Behnam Sheikhi, Hamid Manafi and Abbas Lesani are some among many activists who demand their rights to education in their mother tongue. They were arrested and sentenced to lengthy prison terms on fabricated criminal charges.

Two members of Southern Azerbaijani National Awakening Movement, whose bodies were found in the Aras River, the boundary between Iran and Azerbaijan, in April 2005, were not “so lucky”.  We can also remember another activist Sayyad Nejad Ali, who was killed by the Iranian secret police.  There are many other examples of suspicious deaths of Azerbaijani activists.

Membership in national organizations for Azerbaijanis living in Iran can be dangerous and may turn into arrest and torture.

On 1 August 2013, Human Rights Watch sent an open letter to the elected president of Iran Hassan Rouhani regarding systematic human rights violations, in which called for a review of the policy in this sphere. As we can see, nothing has changed since then. The events of late 2017 – early 2018 showed that the regime didn’t intend to change its approach. Mass arrests and shooting at civilians serve as a perfect example of that.

Repressions in Southern Azerbaijan have also not ceased. Almost every week we obtain information of the disappearances of persons and their subsequent arrests. And it is despite the fact that there are already large numbers of arrested Azerbaijani activists in the prisons.  It is obvious that the authorities in Tehran believe they can stop the national movement in Southern Azerbaijan through arrests, murders and torture.

However, despite repression and pressure, we can periodically witness various forms of protests held by Azerbaijanis.

One of such protests took place in the University of Tabriz. Azerbaijani students staged a peaceful protest requesting education in the mother tongue, although universities in Southern Azerbaijan are under tight control of the regime and authorities.

I assume that repressions by Iranian authorities will only increase, as the national movement spreads in Southern Azerbaijan. Unfortunately, human rights of Azerbaijani people in Iran don’t attract attention of Western human rights organizations as much as human rights of minorities in other countries. I can assume that it is partly due to the sympathy of certain liberal circles for Iran.

Human rights issues must not be held hostages to the sympathy of individuals or organizations, I guess.

I’m writing this article in the eve of the International Mother Language Day, with the hope that one day, not only Azerbaijani, but also other peoples of Iran will be given an opportunity to receive education in their mother tongue.

A few words about anti-Turkish hysteria in Iran

More and more people take to the streets in South Azerbaijan – PHOTO; VIDEO