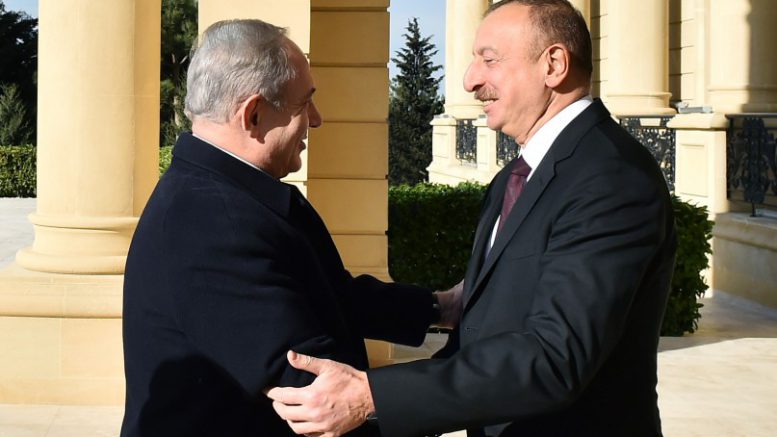 Azerbaijan President Ilham Aliyev said Tuesday that his country has signed $5 billion worth of long-term contracts over the years to buy weapons and security equipment from Israel.

Aliyev was speaking during a state visit to Baku by Prime Minister Benjamin Netanyahu, the purpose of which, in part, is to help Israel sell arms, reportedly missile-defense systems.

Netanyahu and Aliyev signed four economic cooperation agreements in the fields of agriculture, prevention of double taxation and mutual quality standards during a two-hour meeting attended by security and defense advisers from both nations. Environmental Protection Minister Ze’ev Elkin (Likud) also was in attendance to discuss cooperation between the two countries and sign the agreements.

“We’re very satisfied with the level of this cooperation,” Aliyev said during a joint press conference with Netanyahu following the meeting.

There, he will meet with Kazakh President Nursultan Nazarbayev before returning to Israel on Thursday.

Aliyev did not elaborate on the kind of weapons Azerbaijan is purchasing, but his comments provide some insight into the comfort level he has in his country’s strategic ties with Israel.

His comments come against the backdrop of hostile relations between Azerbaijan and southern neighbor Iran, whose leaders have repeatedly condemned Azerbaijani-Israeli ties, including in the past week.

Iran sees these ties as a threat to its security and claims that Azerbaijan serves as a forward base for Israel to gather intelligence and prepare for a potential military strike.

Aliyev, who has ruled in Azerbaijan since 2003, revealed the scope of the weapons deals during the press conference. Netanyahu did not address the security cooperation between the two countries.

Aliyev also confirmed that his country sells Israel oil, but added that he is interested in “diversifying” commerce between the two states.

The prime minister, who is visiting Azerbaijan to mark 25 years of diplomatic relations between the countries and to further strengthen ties, praised the cooperation and friendship between Israel, as the Jewish state, and Azerbaijan, a Muslim country, saying that with the great “darkness” in some parts of the world such cooperation could serve as an example of cooperation and friendship between Israel and the Muslim and Arab world.

Before departing from Ben-Gurion Airport on Tuesday morning, Netanyahu told reporters Israel is being courted by many countries around the world, including Muslim states in Central Asia.

Both Azerbaijan and Kazakhstan want to strengthen their ties with Israel, Netanyahu said, and “following the strengthening of our relations with powers in Asia and countries in Africa and Latin America, now comes the connection with important countries in the Muslim world.”

Though Netanyahu briefly visited Azerbaijan during his first term as prime minister in 1997, this will be the first-ever visit of a sitting Israeli prime minister to Kazakhstan.

Israel purchases more than half of its oil from Azerbaijan and Kazakhstan. In addition, Azerbaijan is strategically important because it borders Iran. Kazakhstan’s diplomatic importance will increase in January, when it assumes a rotating seat on the UN Security Council for the next two years.

In addition, both countries are members of Organization of Islamic Cooperation.

“Israel’s relations [with the world] are growing at an unprecedented pace,” Netanyahu stressed, noting the “historic” nature of the visit to Kazakhstan.

He also noted that when he visited Azerbaijan 20 years ago he met with the current president’s father, then president Heydar Aliyev.

Be the first to comment at "Azerbaijani President: We’ve bought almost $5 billion in Israeli military goods"