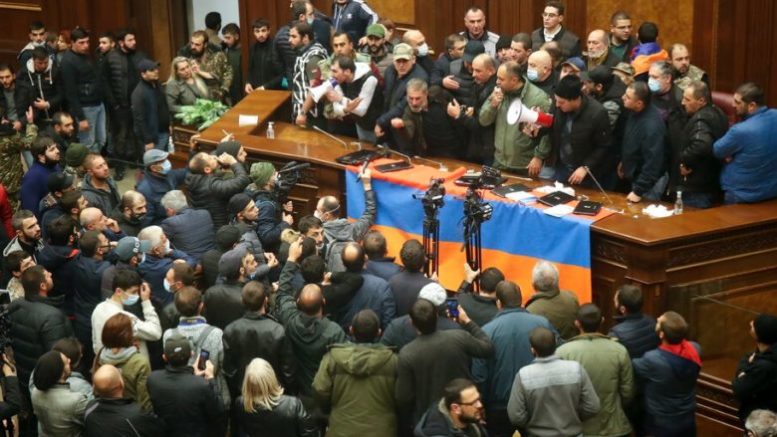 Probably many of you are aware of France’s unequivocal position on the Karabakh issue. Some believe (and I agree with them) that France should be expelled from the OSCE Minsk Group due to its pro-Armenian stance.

But what if I tell you that France is taking not a pro-Armenian, but a pro-French position?

Provocative statements of Macron and the French Foreign Ministry on the conflict in Karabakh, and an attempt to recognize the so-called. “NKR” in the French Senate are not the result of activities of the Armenian lobby. It is the official position of France. Of course, France has a powerful Armenian lobby, but it is just one element of these processes.

The real reason? – France, over the past year, has received several blows from Turkey in Africa (Libya, Mali, etc.), and this happened despite the fact that for many decades Paris considered a significant part of Africa to be its backyard and the territory of exclusively French influence. Ankara’s actions demonstrated that this is no longer the case. In addition, France is at the forefront of confrontation with Turkey in the eastern Mediterranean, where France backs Greece and Cyprus. But the weakness of Athens and Nicosia and their pathological fear of Turkey greatly strains Paris and forces it, on the one hand, to constantly push its situational allies, and on the other hand, to carry out a part of the mission by itself and act as a party to the dispute. And it is despite the fact that France is not an eastern Mediterranean country.

And of course, the interests of France and Turkey collided in Lebanon and Syria. In such a situation, the conflict in Karabakh is seen by Paris as another area of confrontation with Turkey. And Paris acts there on this basis. The agreement of November 10, the victory of Azerbaijan, and as a result, acquisition of a transport corridor from Azerbaijan to Turkey was not a part of Paris’ plans. The ideal scenario for France would be to get Moscow and Ankara drawn into the war. In that case, the positions of both countries in the Eastern Mediterranean would be weakened, and France could push aside both Russia and Turkey in this region and in Africa.

But as we can see, that did not happen; moreover, the contours of the future triple alliance Moscow-Baku-Ankara are beginning to take shape.

Assistance of the French and Greek special services with transfer of Kurdish militants, as well as weaponry to Armenia failed to turn the tide on the battlefield, despite the long-standing contacts of the French special services with Armenian and Kurdish terrorist organizations. It is because in this conflict, same as in Africa and the Eastern Mediterranean, Paris backed the weaker side.

This is the real reason for the mentoring tone of Paris towards Moscow and the hysterical reaction of French diplomacy and politicians. Paris believes that Moscow seized the initiative and buried France’s hopes for a direct confrontation between Turkey and Russia. Overall, Macron failed miserably with advancing the French plan in the Caucasus and the Eastern Mediterranean, and Erdogan outplayed Macron. The only option that remains for Paris is to escalate the situation in Karabakh and the Eastern Mediterranean, while it is obvious that in case of an escalation France will not get involved in the hostilities, the French would prefer to do the fighting via proxies and pay for their geopolitical ambitions with other peoples’ lives.

American co-chair on meeting between Aliyev and Sargsyan

Standoff in Armenia turns into a “Maidan”