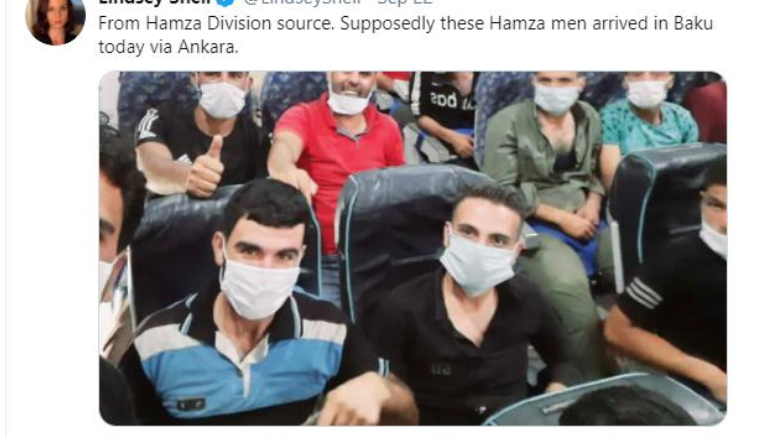 Since the resumption of hostilities in formerly frozen, but unresolved for many years conflict in Nagorno-Karabakh some international media outlets started spreading information about alleged presence of mercenaries from the Middle East (in particular Syria) in the area and their participation in combat actions on the side of Azerbaijan. These allegations remain unfounded to this day, and the only proof that the journalists provided so far were anonymous interviews with people, who claim that they were offered money to join the fight on the Azerbaijani side. However, it is very dangerous to present such allegations as an actual proof. There are many reasons why people would give false evidence to claim things that never happened or that they never did. One good example is a very recent publication in BBC News (which itself published interviews with people making such allegations) about a hoax story run in The New York Times. According to this report, a Canadian citizen Shehroze Chaudhry, claimed in interview to NY Times that he executed people for ISIS, while he made totally different claims in his interviews to CBC. Eventually, Chaudhry was later arrested by Royal Canadian Mounted Police following a lengthy investigation that uncovered no links between this person and IS. His story turned out to be a hoax. You can read the BBC report on Chaudhry’s story here: https://www.bbc.com/news/world-us-canada-54304509

Another peculiar aspect of the allegations is how fake news are created. The mechanism of this was investigated by the Expert Group of CCBS. They exposed different methods used for creation of false information and its circulation in mass media. In particular, the false info originated from sources with highly dubious credibility, such as certain Lindsey Snell. This person was briefly taken hostage by ISIS in 2016, but was somehow allowed to use a cellphone and take pictures before she suspiciously ran away from jihadists. Her sources are always anonymous that are not possible to verify, and as Expert Group notes, almost all her publications on this topic provide no assurance by using the words “supposedly” or “unconfirmed” instead. Snell is also known for her sympathy with the Armenian and Kurdish causes.
Another popular method is using Photoshop to create fake images (examples of which were shown by CCBS), as well as using pictures of Turkish soldiers who died of disease or in other conflicts. In addition, there are claims that mercenaries are recruited to protect the oil fields in Azerbaijan, before being sent to the battlefield, which is utterly absurd. The oil fields are located on and off shores of Caspian Sea, some 300-400 km away from Nagorno-Karabakh and theater of the military operations, and do not need any protection. Plus, those fields are operated by a consortium of the leading international oil companies, which means that the use of “illegal mercenaries on the oil fields” must be happening under the watch of those companies. The investigation by Expert Group of CCBS is available here: https://ccbs.news/en/article/1494/

All of the above information shows that in the absence of solid proofs, reliance on highly dubious and unverifiable sources could inflame the tensions in the volatile region and hinder the peaceful resolution of the conflict, as well as lead to aggravation of relations between the regional powers. Therefore, the news outlets must do rigorous fact checking and verification before running sensational stories about mercenaries fighting on one of the sides of the conflict.

Mubariz Ahmadoglu: OSCE MG co-Chairs have to investigate the genesis of deaths in the Armenian army

Be the first to comment at "Syrian mercenaries and hoaxes"