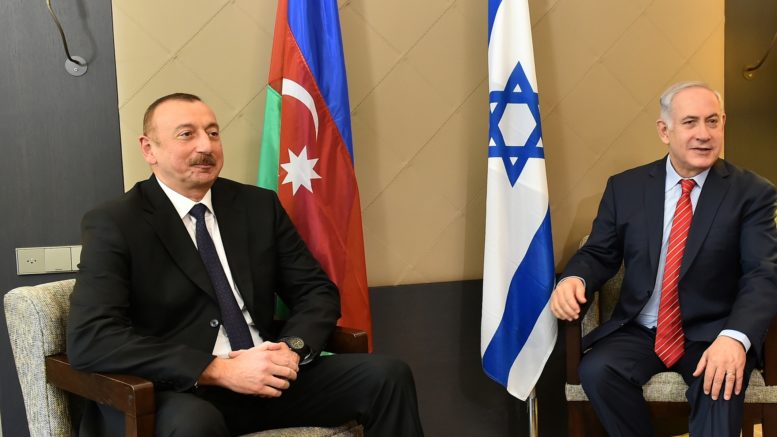 There are many reasons why Israel tacitly supported Azerbaijan during the recent hostilities with Armenia. Some are quite obvious. Israel does not have many friends among Muslim majority counties, and Azerbaijan is one of them. Azerbaijan is a home to an ancient and thriving Jewish community, with indigenous Mountain Jewish community living in Azerbaijan since the times immemorial. There is no antisemitism in Azerbaijan, and the Jews in Azerbaijan always enjoyed friendly relations with Azerbaijani people and patronage from the government. Azerbaijan also borders with Iran, and Azerbaijan’s secular government and society resist the attempts of Iran’s theocratic regime to spread its ideology across the border. However there’s another reason that is being overlooked by many observers.

Since 1993 Armenia occupied 7 districts of Azerbaijan outside of Nagorno-Karabakh, including 3 districts along the Iranian border, namely districts of Fizuli, Jabrayil and Zangelan. While the international borders of Armenia, including the border wit Iran, are protected by the Russian border guards, they have no legal basis to be present on the territory of Azerbaijan. Armenia’s own border guards cannot be officially deployed on the territory of Azerbaijan either. This means that the large section of Azerbaijan’s border with Iran has been practically unguarded for decades.

Armenia and Armenian nationals were often caught in scandals related to smuggling weapons and nuclear materials to different countries, including Iran. Only in Georgia, eight Armenian nationals have been arrested since 2014 for attempting to smuggle and/or sell nuclear materials. The growing concern of the US about smuggling activities in Armenia resulted in signing of a plan of joint non-proliferation actions in 2008. But apparently this had little effect.

Smuggling the nuclear materials across the official Armenia – Iran border would be problematic due to the presence of the Russian border guards. However the unguarded border on the occupied territories presented an ideal opportunity for smugglers to move prohibited materials to Iran, and that could be regarded a serious security problem for Israel. That would explain why Israel had additional reasons to supply Azerbaijan with advanced weapons to win the war, as by taking control over the entire length of its border with Iran, Azerbaijan would put an end for any illegal cross-border activity.

The reaction of Iran is also noteworthy. When the hostilities started at the end of September 2020, Iran called on the sides of the conflict for restraint. However, the growing pressure from the Azerbaijani population of Iran, which took to the streets demanding from Tehran to severe any ties with Armenia, and obvious military advantage of Azerbaijan on the battlefield forced Iran to change its position and make statements in support of Azerbaijan’s territorial integrity. At the same time, Iran deployed large military contingents on the border with occupied regions of Azerbaijan, something that it never did while those districts were under the Armenian occupation. Iranian officials stated that this is done to protect Iran from the “terrorists and Zionists”.

Thus, it appears that by aiding Azerbaijan in the recent war with Armenia over the region of Nagorno-Karabakh and adjacent occupied territories, Israel resolved its own security problems, helping Azerbaijan restore its control over the entire length of its border with Iran and closing the illegal smuggling route.

Israeli President thanks Azerbaijan for help in putting out wildfires – Photos