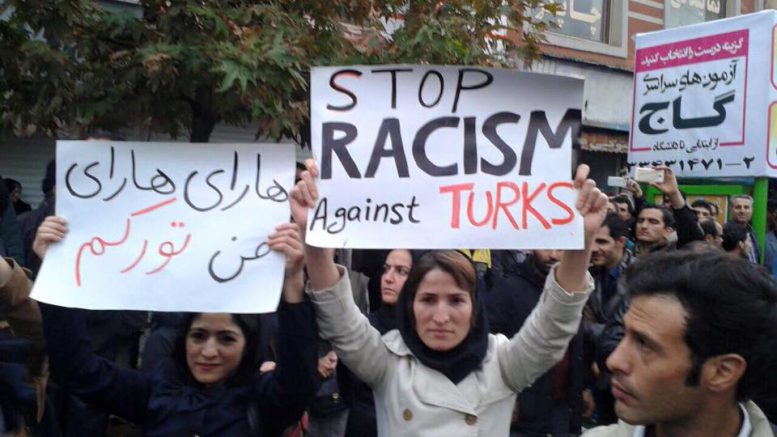 It is often written in analyses of Iran that Iran’s minority groups are well integrated and assimilated into society and bureaucracy. This view is especially predominant with respect to the Azerbaijani Turks, pointing to the overwhelming presence of Azerbaijanis in the bazaars, military, and government. There are several factors and nuances that this surface-level view overlooks. Azerbaijanis constitute a massive nation comprising anywhere between 1/4-1/3 of the total population (the government does not do censuses along ethnic lines), meaning that they pose the most significant threat to the state. It is only rational for this region to be the most securitized region of Iran. Azerbaijanis are also viewed with the most disdain and racism (let’s not forget that for the majority of the past millennium prior to the Pahlavis, Iran was governed by Turkic tribes). So when the Pahlavis came with their nationalism reforms which were an existential threat to the Azerbaijanis, naturally the pot boiled and they supported more inclusive ideologies such as leftist movements, Islamic movements, and there were some that called for a renewal of Independence that was briefly granted in 1946. With the Islamic revolution, they were given access to political bureaucracies that they once had. Their survival became hinged on this alliance with the state, and they eventually became complacent in their assimilation. Many parents began teaching their kids Farsi for status and Turkish was viewed as a less advanced language. However, culturally the disdain for Azerbaijanis persisted: Turkish jokes were rampant, there was a view that Azerbaijani culture was lesser, and any demands for linguistic and cultural rights were suppressed brutally. Thus we come to today. It is no wonder that with this myopic view of Iran, the West gets so confused at greater nationalism among the Azerbaijanis of Iran. We are in that same pot boiling scenario as before, where economic distress fuels greater nationalism and vice versa. However, this time if anything were to happen, I doubt the Azerbaijanis would support or ally with another movement that would eventually feed their own oppression and assimilation.

Why Southern Azerbaijanis are indifferent to the new “Iranian Revolution”?