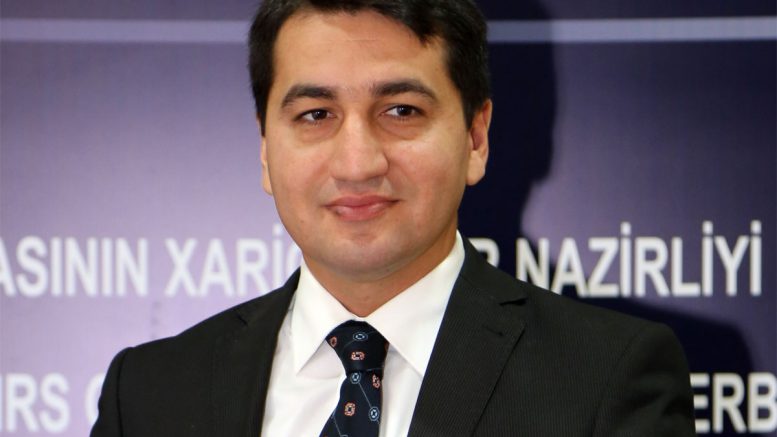 “France, which together with other co-chair countries of the OSCE Minsk Group has been engaged in the settlement of the Armenia-Azerbaijan Nagorno-Karabakh conflict for over 25 years, knows very well that the continuation of the military occupation of Azerbaijani territories by Armenia is the main reason for the tensions in the region”, – the spokesman of the Foreign Ministry of Azerbaijan, Hikmat Hajiyev told Trend, commenting on the statement by the Ministry of Foreign Affairs of France.

“Armenia committed ethnic cleansing against more than one million Azerbaijanis on its territory and in the occupied Azerbaijani lands, as a result of which in the early 1990s Azerbaijan experienced the greatest humanitarian tragedy since the World War II. Armenia still hasn’t complied with the requirements of the relevant UN Security Council resolutions on the complete and unconditional withdrawal of troops from the occupied territories of Azerbaijan and the return of IDPs to their homelands. The statement of the President of Azerbaijan on the return of Azerbaijanis to their historical lands, as enshrined in international documents and UN Security Council resolutions, is one of the important humanitarian principles of the conflict settlement process”, – Hajiyev said.

“France, as a co-chair of the OSCE Minsk Group and a permanent member of the UN Security Council, as well as other co-chairs of the group should be seriously concerned about the illegal actions of Armenia committed with the aim of annexing Azerbaijan’s occupied territories, changing the demographic composition of the territories, and destructing the material, cultural and religious heritage of the Azerbaijani people against the backdrop of negotiations on settlement of the Nagorno-Karabakh conflict. In this regard, one of the most worrying moments is the establishment of ties between the regions of France and the illegal regime as opposed to the official statements of the French Foreign Ministry and the Interior Ministry and the status of France as a co-chair of the OSCE Minsk Group, as well as the entry of representatives of the illegal regime into France, in violation of the provisions of the Schengen visa, and propaganda carried out by them. “We also call on France to pay attention to the congratulatory message of Armenian President Serzh Sargsyan, sent on Feb. 20 to the illegal regime in connection with the 30th anniversary of aggressive separatism in the Nagorno-Karabakh region of Azerbaijan. The President of Armenia presents an illegal regime created as a result of terror against Azerbaijan, military aggression, bloody ethnic cleansing, war crimes and criminal acts against humanity as “a success” and calls for the annexation of the sovereign territories of Azerbaijan,” Hajiyev noted. “We believe that the situation when the Armenian president quotes the Armenian terrorist organization ASALA member and the international terrorist, Monte Melkonian, who was involved in murder of innocent people in terrorist attacks in France as well, should seriously alarm France, which suffers from the international terrorism” – he concluded.

In connection with the above, the spokesman of the Foreign Ministry of Azerbaijan called on his French colleagues not to succumb to provocations and misinformation of Armenia and the Armenian lobby in France.

Matthew Bryza: “Armenia has occupied Azerbaijani territories. It should leave these lands”

OSCE to monitor frontline in Agdam