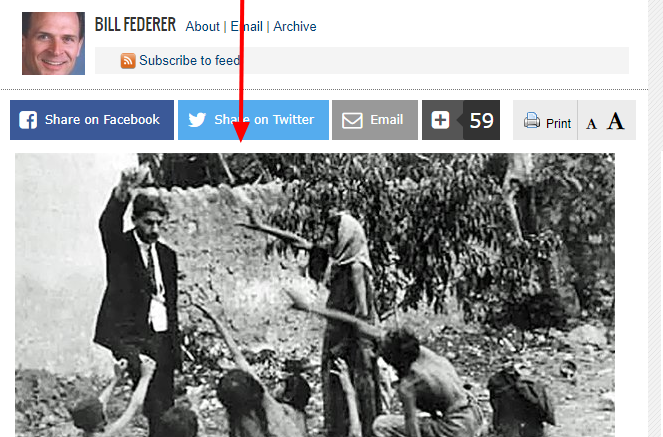 A far-right American website www.wnd.com published an article by certain Bill Federer, who claims that Turkey committed a genocide against Armenians in 1915. The article is replete with historical inaccuracies and bald-faced lies. Remarkably, the author uses a well known fake image of an “Ottoman official” to advance his point, which goes to show the quality of his research. The only evidence in his accusations against Turkey are the political statements from American Presidents, who were leaders of the USA at the time when USA and the Ottoman Empire were political rivals and later warring parties in the WWI. Of course, the statements of politicians should not be taken at the face value. It is like using the claims of J.W. Bush of the weapons of mass destruction to claim that Iraq actually had them. Coming back to the image, the fact that it was a fake has been a general knowledge since 2010, when the Australian scholar Dr. Jeremy Salt exposed the fakery in his article, reproduced HERE  Later, the Armenian researchers for the Armenian News Network corroborated the findings of Dr Salt. The image is in fact a very primitive collage, cut and pasted from fragments of other photos. Any serious researcher of the topic should be aware of the story with this image. But apparently such facts are of little concern for this author, who also makes many other false claims, such as dating Movses Khorenatsi to the 5th century A.D. while in reality he lived at least 5 centuries later, or claim that Yerevan was founded in 782 B.C., etc. If the author is going to replace the fake image, we would advise not to use other popular fakes, such as this one, for example: The story behind one image. This might save the WND some further embarrassment, while it is too late for Breitbart, which has already used this fake to claim that the Turks used the photo for “glorifying kills made in the name of Allah”. For a retired army officer, the author of the article James G. Zumwalt demonstrates an extremely poor knowledge of the military history, claiming that the “distinctive uniforms” identify the military servicemen in the picture as “Turkish soldiers of the Ottoman Empire”, while any person familiar with WWI history could tell that the uniforms are in fact the Imperial Russian.

Not surprisingly, the same fake image with the Russian soldiers (which in reality was taken in 1904, and shows the Russian border guards next to the bodies of Armenian militants who tried to break through the Russian frontier lines and were destroyed by the Russians) could be found on the personal website of Bill Federer, along with other fakes. It is just another proof that historical accuracy means very little for the sites like WND and Breibart, which are known to promote conspiracy theories and fake news. A large number of anti-Turkish and pro-Armenian comments under the article clearly illustrate the target group of these sites. These websites just use any opportunity to promote Islamophobia and religious enmity. However, does this serve the national interests of the USA, considering that the modern Turkish state has been a staunch US ally for many decades?

Armenians try to force Trump to cross the “red line”

Whose order does the Armenian lobby in Knesset want to fulfill?