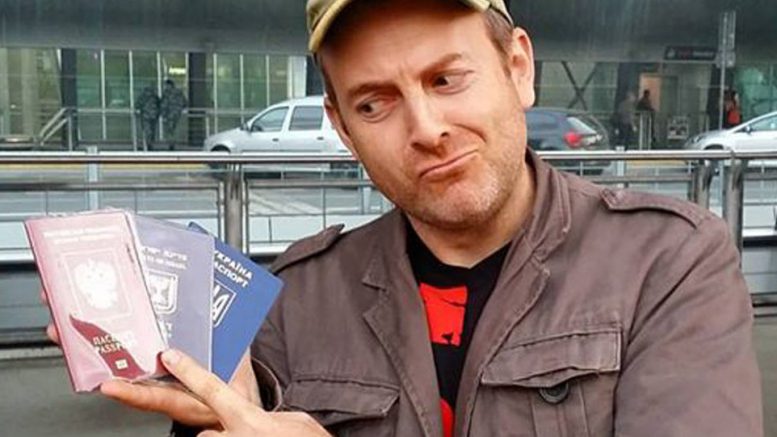 As you know at the end of the last year, the blogger Alexander Lapshin was detained in Minsk at the request of Azerbaijan.
Lapshin was declared wanted, due to violation of the law on “The State Border” and “Migration Code of Azerbaijan.”
Lapshin was included in the blacklist of the Azerbaijani Ministry of Foreign Affairs after the illegal visit to the Azerbaijani lands occupied by the armed forces of Armenia.
With regard to Lapshin, two criminal cases were instituted under article 281.2 (appeals directed against the state) and 318.2 (illegal crossing the state border of Azerbaijan) of the Criminal Code.
While in the occupied territories, Lapshin allowed himself insults against Azerbaijan and was engaged in the propaganda of the puppet regime established in the occupied territories of Azerbaijan.
In 2015 Lapshin, bypassing the “ban” imposed on him, entered Azerbaijan using Ukrainian passport, where his name was written somehow differently.
At the moment, the issues are being addressed to have Lapshin extradited to Azerbaijan. Of course, I could go on describing the details of what Lapshin had done, and how he ended up in the detention center in Minsk. But, dear reader, you can find more about that on other news sites. There is another issue that I want to address. Almost immediately after the detention of Lapshin, the audience (not the Azerbaijani) was divided, some supported him, some, on the contrary expressed negative attitude towards Lapshin.
Without preliminary permission, the lawyers and all sorts of defenders of the allegedly violated rights of Lapshin have started to appear on the websites of Russia. A number of offensive accusations was made against Azerbaijan by the Armenian friends of Lapshin, they even created a petition supplying it, to put it mildly, with far from true “facts” in the best traditions of the Armenian state propaganda. I certainly understand that the Armenian side will use Lapshin issue as an assault against Azerbaijan. It is to be expected.
However, I don’t share the same assumption with some people who say that if extradited, some “friends” of Azerbaijan in Russia and Israel may take offense at us. I believe that if friends take offense because Azerbaijan acts in accordance with the international law and national legislation, then we should think whether they are real “friends”.
I would also like to ask another question back. What would Israel do, if a person who has, for example, citizenship of Canada, Ireland and Greece arrived in the Gaza Strip and started praising Hamas, while allowing insults against Israel (although the Gaza Strip isn’t even the territory of Israel), and then bypassing the “ban” by the Israeli side on entering Israel and wrote mean things about this country. For example, Israel has blacklisted the world-famous German writer and the Nobel laureate Günter Grass, for his criticism of Israel.
As Lapshin also holds Russian passport, let’s consider the Russian variant too. What would the Russian authorities do, for example, if a blogger from Poland arrived in Russian-occupied Crimea and criticized the Russian authorities and supported the position of Kiev? I’m afraid even to imagine what would have happened to this man. Although from the point of view of the international law, this blogger would be right. And what would have happened if a person, who is in the black list of Russia, had entered the country under false pretences? I think it won’t take long to figure out…
It is also worth considering that Lapshin knew perfectly well what the consequences of his visit would be, moreover, before traveling to Azerbaijan, he openly wrote in the social network that he was going to break the laws of Azerbaijan.
Taking all of the above into consideration, I find the storm in a teacup arranged by some Israeli and Russian media inappropriate. And if you, gentlemen of the press who raise the issue of Lapshin, making him almost a prisoner of conscience, want to protect the individual from arbitrariness in state action, I advise Israeli journalists, to start with the protection of the rights of Palestinian activists, and it would be nice if Russian journalists pay attention to the fate of the Crimean Tatar activists.
P.S. Personally, I am not a supporter of a prison sentence for Lapshin. But the question is solved on the legal plane and all sorts of insults by defenders at this stage can only make it worse for Lapshin.

Azerbaijan achieved the cancellation of the conference organized by Armenia

Matthew Bryza: “Armenia has occupied Azerbaijani territories. It should leave these lands”

Be the first to comment at "Alexander Lapshin a provocateur or an innocent victim?"