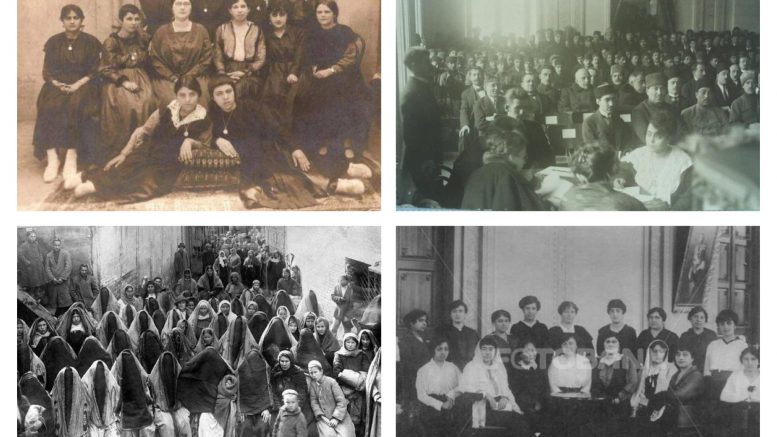 Activities of Azerbaijani intelligentsia in the early twentieth century, women’s right to vote before and after the proclamation of the ADR.

The problem of women’s emancipation since its inception has never, neither then nor now, lost its relevance, but instead remains on the agenda of international events. Azerbaijan, to be specific, Azerbaijani intelligentsia of the early XX century, also has its own merit in resolving these issues and providing women with broad political rights.

The situation of Azerbaijani women in the early XX century was not the most enviable. All their activities were limited to housework, child care, family care, food preparation, work on the household. This situation prevailed in the rural areas of Azerbaijan. Slightly different picture was in urban areas. It was primarily due to the ‘oil boom’, which took place in Baku in the second half of the XIX century. As a result, by the beginning of the new century, a local wealthy stratum of commercial and industrial bourgeoisie has formed, among whom there were also female representatives, what gave them the right to vote in elections to local government bodies. For example, according to the ”electoral lists” to the Baku City Duma between 1906-1909, more than 200 women who met the criteria set out in the “qualification of electors” participated in elections. But as you can see from the above example, this rule applied not to all women, but to those whose families had certain financial capacity.

One of the first attempts to influence the situation was made by the national intelligentsia during their work in the second State Duma of Russia. In 1907, representatives of the Muslim faction proposed a bill (on the initiative of Khalil bey Khasmammadov), which proposed granting women the right to vote. The bill was adopted by the Muslim faction, but with a caveat (election meetings were to be held separately). The dissolution of the Duma by the Czar left the initiative unrealized.

The February Revolution of 1917 was an important event in the fight for women’s equality. Already in April 1917, as part of preparatory work for the convening of the Constituent Assembly, the Provisional Government adopted a resolution on “Proceedings of elections of members to the City Duma and on precinct urban governance”. One of the paragraphs of which read: “The right to participate in elections is given to Russian citizens of both sexes, of all nationalities and faiths, who have reached the age of 20 by the time of preparation of electoral rolls”. This gave women the right to vote during the elections to the All-Russian Constituent Assembly. This event allowed the leaders of the Azerbaijan National Movement to push the “women’s issue ” to a more qualitative political level. During the first congress of the “Musavat” party (the largest political party of Azerbaijanis at that time), held on October 26, 1917, the party program was adopted, the 14th paragraph of which reads: “All citizens having reached the age of 20 have the right to vote, regardless of their gender, nationality or religion”. It was the inclusion of this item on their political program that allowed the Musavat Party to achieve significant success in the elections to the Constituent Assembly (32 out of total 44 seats obtained by Muslim parties). It is also noteworthy that women’s active participation in the elections could not be prevented by the intensive propaganda of the Islamists represented by the “Ittihad” party, which strongly opposed granting women equal rights with men, considering it as “lechery and apostasy”.

The final consolidation of the women’s right to vote in Azerbaijan took place after the proclamation of the Azerbaijan Democratic Republic on May 28, 1918. The consistent commitment and a desire to solve the problem of political disenfranchisement of Azerbaijani women was reflected in the law “On the Constituent Assembly elections of the Republic of Azerbaijan”, adopted by the Parliament on July 21,  1919. The general provision of the law stated that “The Constituent Assembly is formed of members elected by the population on the basis of universal and equal suffrage without any gender distinction, through direct elections and secret ballot, with the use of proportional representation”. Further, the third paragraph of the second chapter states: “The right to participate in the elections to the Constituent Assembly is given to citizens of the Republic of both sexes who turned 20 years old by election day”. Thus, the national intelligentsia not only consolidated the opportunity of the female half of the population to fully participate in political life, but also did it for the first time in the Muslim East in general, becoming pioneers in this regard. It is of particular significance that at the same time in a number of other European countries, this problem has not yet found its solution. For example in the UK women were given the right to vote in 1928. Similar laws in Spain and Portugal were adopted only in 1931.

The value of this achievement shows how a woman occupied an important place in the minds of the national intelligentsia. It is this step that today largely influences the place of women in the political life of Azerbaijan and helps to create a positive image of the country abroad. Because, as one of the leaders of the Azerbaijan National Movement M. A. Rasulzadeh wrote: “If a woman is miserable, deprived and ignorant, then half of the nation is sick and paralyzed”.

Muslim women are victims of discrimination

The factor of South Azerbaijan in the politics of the ADR