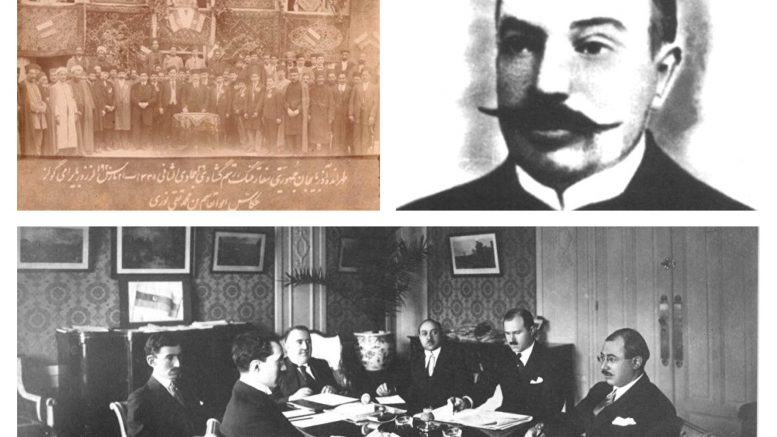 The establishment of the Azerbaijani Democratic Republic in May 1918 was the beginning of the transition of the Azerbaijani people to a new form of social and political structure. Overcoming its feudal past, Azerbaijani intelligentsia declared its readiness to exist in the international arena, in the framework of the nation-state. This event had an impact on Iranian Azerbaijanis, causing both sympathy and antipathy among them.  In this context, it becomes interesting to follow the formation of the relationship between the ADR and Iran and a place of South Azerbaijan in those processes.

The proclamation of the independence of the ADR was met with concern and suspicion in the Iranian official circles. While still being a member of the Azerbaijan delegation in Istanbul, M.A. Rasulzadeh, in a report dated September 6, 1918, wrote that a copy of the declaration was “sent to the Persian consulate. Consulate, putting them into one package, sent all our papers back. On a separate sheet of paper the Persian consulate wrote that it does not recognize an independent state called Azerbaijan”. This attitude was due to the fear of strengthening the national liberation movement among Azerbaijanis of South Azerbaijan as a result of the proclamation of the independence of Azerbaijan and the growing power of Turkey (Ottoman Empire) in this region. In order to somehow calm the Iranian circles, the Azerbaijani government, in correspondence with foreign diplomats, used the term “Caucasian Azerbaijan”.

The hostile attitude of Iran prevented the ADR political figures from initiating an extensive diplomatic activity in its territory and establishing close cultural, economic and political ties with the Iranian Azerbaijanis. The gradual change of the international situation made it possible to overcome these difficulties. The increasing influence of Britain on the leadership of Iran and the conclusion of the Anglo-Persian agreement on August 9, 1919, in which Britain recognized the territorial integrity of Iran and pledged to ensure their safety from the threat of the Bolsheviks and the White movement, created the conditions for the ADR’s rapprochement with Iran, as the presence of an independent state between Iran and Russia was beneficial to Tehran. In autumn 1919 the Azerbaijani-Iranian joint commission was established, which put forward an agreement on the Iranian-Azerbaijani alliance, in which it was noted that “Existing within the specified limits of the Caucasian Azerbaijan from May 28, 1918, The Republic of Azerbaijan is recognized as a self-sustained, independent, democratic republic …” The agreement proved to be successful. After a de facto recognition of Azerbaijan by the countries of the Entente in the winter of 1920, the cooperation between the two countries only expanded. In March-April 1920, bilateral agreements between Azerbaijan and Iran were signed, covering various areas of activity. The biggest victory of this diplomacy can be considered a “Secret Agreement” between Iran and the ADR, concluded on a holiday of March 20, 1920. In the first article of this treaty the Iranian government announced “de jure recognition of independence of the Caucasian Azerbaijan Republic “.

Of great importance was the attitude of the Iranian Azerbaijanis towards the declaration of independence of Azerbaijan. For example, in the summer-autumn of 1918, while in Istanbul, M.A. Rasulzadeh noted in his reports to the Government of Azerbaijan: “… met with Persian Azerbaijanis. They are my old friends. In them I felt a secret love for self-determination (independence) of Azerbaijan. Many of them are (disappointed) in Persia. They highly desire to have their own opinion. There even is a society organized at the initiative of South Azerbaijanis. …representatives said that we forget them. That Northern Azerbaijan, given political life, will necessarily reunite with the South Azerbaijan”.   Even so, among the Iranian Azerbaijanis there were also those who were against the idea of independent Azerbaijan. Sayyed Hasan Taqizadeh (Rasulzadeh’s ally in the constitutional movement in Iran) was one such individual. As noted by Rasulzadeh, “According to rumors, Persian patriots in Persia are mostly, unfortunately, our Azerbaijanis. They are led by well-known Taqizadeh.  They made known their displeasure with the Turkish policy carried out in Azerbaijan”.

Against the background of this ambivalent attitude towards Azerbaijan’s independence, the activities of the head of the ADR’s diplomatic mission in Iran Adil Khan Ziyadhanly are worth mentioning. The diplomatic mission appointed to Iran left Baku on January 4, 1920. The attitude of the local population toward the arrival of Adil Khan in Iran was noted in the “Azerbaijan” newspaper: “The Azerbaijani citizens living in Persia were especially happy, since the head of the mission embodied their first legal representative, who arrived from the Republic of Azerbaijan to Persia. The mission is now on its way to Tehran”.

Immediately upon his arrival in Iran, Ziyadhanly initiated an extensive diplomatic activity. Already in the beginning of January, in the shortest period, 3 thousand copies of the book “Azerbaijan: history, cultural and political situation”, which was published by Ziyadhanly himself in Baku in 1919, were distributed for free.  Despite the modest financial capacity, there was established a charitable society, the society for teaching the Azerbaijani language. Representatives of the diplomatic mission did not forget to keep an eye on the political situation in Iran. In his report to the Foreign Ministry of Azerbaijan in April 1920, Ziyadhanov wrote: “The attitude of the Farsi-Persians to our country is not particularly favorable, on the contrary – the attitude of the Turks of Persian Azerbaijan towards us is brotherly-friendly; there is a trend toward autonomy, independence of Persian Azerbaijan and its separation from Farsistan”.  Akbar Agha Sadikhov (the deputy of Ziyadhanov) shared his observations on this issue, reporting about the movement of “Azerbaijani independence supporters, who are beginning to feel national sentiments and work in favor of secession from Iran and the establishment of an independent and self-sustained Persian Azerbaijan. This movement is now of great concern to both the Persian Government and the British, who have big plans for these rich lands.  In Persian Azerbaijan there is also agitation in favor of separating from Persia and accession to the Republic of Azerbaijan. The Republic of Azerbaijan should be ready for the upcoming events in Persia, and to use these events to their advantage”.

Establishment of an independent Azerbaijan contributed to the awakening of national consciousness among Iranian Azerbaijanis, in many ways, accelerating national liberation movement in South Azerbaijan.  Not long before the fall of the ADR, in Tabriz, April 7, 1920, under the leadership of Sheikh Mohammad Khiabani, a powerful anti-British uprising broke out. Unfortunately, this uprising was subject to external interference. The Bolsheviks took advantage of the existing situation. Historian J. Hasanli wrote the following regarding this issue: “In general, there are many documents that confirm the Bolsheviks’ secret influence on the national independence movement in South Azerbaijan. The misapprehensions that Sheikh Mohammad Khiabani held in relation to the Republic of Azerbaijan, his envy of the independent Azerbaijan in the north, and the fact that he gave the state he established in South Azerbaijan not the name “Azerbaijan” but “Azadistan” is mostly related to external interference”. The historian also notes the role of Deputy Minister of Foreign Affairs L.M. Karakhanian in this matter: “Russia’s Iran policy was determined by Deputy Minister of Foreign Affairs Lev. M. Karakhanian, who was sent to Iran back in June 1918 and was arrested there by the British. He was the principal organizer in sending Armenians under falsified names and surnames as Bolsheviks to South Azerbaijan”.

After the fall of the ADR, the issue of unification of Azerbaijan was not over, but continued to remain a subject of discussions. As an example, «Kurtuluş» (Liberation) magazine, founded by Rasulzadeh in Berlin in 1934, where he addressed the issue of the South Azerbaijan, for which he was criticized. For example, in “Kavkaz” (Caucasus) journal, a prominent representative of the Caucasian émigré H. Bammate (a Kumyk by origin), described those publications as “unbridled fantasies”, which “thoughtlessly jump over the Aras and spread their voracious appetites to Tabriz”. Historian A. Balayev describes the situation at the time: “In this case, Rasulzadeh spoke only of cultural, rather than political ties between the Caucasian and Iranian Azerbaijan, because, as a member and one of the leaders of the Promethean movement he held the position of recognition of borders of the Caucasian republics by Turkey and Iran. After all, to fight the Soviets they had to have at least friendly neutrality of these countries …”.

Meanwhile, the attitude to the problem of South Azerbaijan was expressed not only in print but also in practice. A striking example is the active work of members of the “Musavat” party in Iran, against a background of strengthening national movement in South Azerbaijan in the summer of 1941. That meeting of the executive committee of the “Musavat” in Tehran was attended by such advocates for the independence of Azerbaijan as: Hasan Bala Ghafari, Khalig Kyazimzade, Kamal Hanizadeh and Ali Azertekin (sent there by Rasulzadeh), who discussed the possibility “to strengthen the work of Musavat members among the southern Azerbaijanis … ”. Against this background, it becomes no coincidence that immediately after the entry of Soviet troops on the territory of Iran in August 1941, undercover network for combating the activities of the Musavat members in South Azerbaijan were organized. These facts suggest that, along with the fight against the political regime established in Northern Azerbaijan, the situation in South Azerbaijan has always been the focus of the national forces.

In conclusion, it can be said that in spite of the foreign policy obstacles and inner contradictions between Azerbaijanis themselves, which prevented their full collaboration and consolidation around the idea of independent statehood, the establishment of the ADR became the rallying point, which allowed the people, divided into two parts, and forced to develop in different socio-cultural systems by the will of the history, to start the process of striving for the creation of a single state of all Azerbaijanis.

Turmoil in Iran moved to provinces with an Azeri Turkish majority