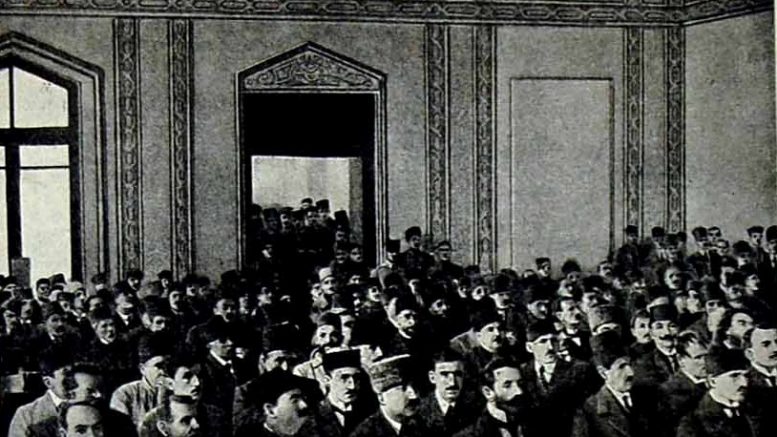 The experience of the establishment of parliamentarism in Azerbaijan Democratic Republic (1918-1920) as an example of the struggle for the development of democratic values in the Muslim East.

Beginning of the twentieth century was remembered in world historiography as a period of profound military-political, socio-economic, cultural and ideological transformation in the minds of the Muslim peoples of the East. One can distinguish two main directions affecting the nature of socio-political development in Muslim countries at the time: Islamic and democratic, secular (European). Whereas the first one relied on traditional Muslim concepts of political power and forms of social organization, where the clergy acted as the guiding force, a democratic form of world order, with its multiple variations, was represented by socialists, nationalists, liberals, etc. This could not but be reflected in fate of Muslims living in the territory of the Russian Empire.

As is known, the territory of modern Republic of Azerbaijan, at that time part of the Russian Empire, mostly inhabited by Muslims as it is now, also did not remain aloof from these processes. With this in mind, it is interesting to trace the activities of the Azerbaijani intelligentsia in that difficult period, one of the significant results of which was the organization and opening of Parliament, which marked the beginning of the traditions of European parliamentarianism in the history of the Azerbaijani people.

A few months before the adoption of the “Declaration of Independence” the interests of Azerbaijanis were represented in the Transcaucasian Sejm. Azerbaijani political parties have received 44 seats in that body, according to the number of seats obtained in the voting for the election to the All-Russian Constituent Assembly from the South Caucasus.

The move of the National Council members to Ganja, with the aim to continue the struggle for the independence already in territory of Azerbaijan, was marred by the beginning of the political crisis that broke out in June 1918. Members of the National Council, on June 17, 1918, decide to dissolve it. The task of forming a new government was entrusted to Fatali Khan Khoyski, where one of the tasks was “to take immediate action to convene the Constituent Assembly of Azerbaijan within the next six months”. The reason for making such a decision was the tension between supporters of democratic development and independence of Azerbaijan and the so-called “Ilhaqists” (unionists).

The latter were representatives of the clerical and partly landlord community of Azerbaijan, who were in favor of Turkey and Azerbaijan merging into one state (Most likely it was dictated by the desire not to lose their political and religious influence over the population, by calling democratic and religious reforms, which would be put into practice by the members of the National Council, ”too radical”). The important role was played here by their influence on Nuri Pasha, who came to the aid of the local population, and propaganda that resonated with the most poorly educated parts of the population. Almost voluntary dissolution of the National Council was the result of the predominance of national interests over personal ones in the minds of national intelligentsia. This allowed smoothing over the contradictions between the clerics and the Democrats, and concentrating on the main task at the time – liberation of Baku from the Bolsheviks, with the force of the “Islamic Army of the Caucasus” led by Nuri Pasha. Shortly after the liberation of Baku on September 15, 1918, and the government’s move to here on September 17, they had to face the new realities. As a result of the defeat in the fields of the First World War, on October 30, 1918, the Ottoman Empire signs the Armistice of Mudros, one of the points of which was a withdrawal of their troops from the Caucasus, which fell under the sphere of influence of Great Britain.  The Ottomans were the only allies of the national forces in the struggle for the independence of Azerbaijan, of which they were deprived. Against this background, it is noteworthy that, already at the first contact with the British command, General Thomson called the government “the intrigue of the Turkish command”. To turn the tide in their favor, it was decided to establish the interim parliament. Assembled after a five-month break, on November 16, 1918, the National Council, due to extraordinary circumstances and impossibility to convene a Constituent Assembly in this situation, decided to transform itself into a parliament. A legislative commission prepared a law on the formation of the Azerbaijani Parliament, which was adopted by the National Council on November 19, 1918. This step was taken to create a coalition government, what was one of the main requirements of the British command in Baku. In particular, the law on the Azerbaijan Parliament stated the following: “Given the multi-ethnic composition of the population … strictly in proportion to their relative weight in the national composition of the population of Azerbaijan, there were special quotas in the parliament. With a ration of 1 deputy per each 25 thousand people, 120 seats in the parliament were distributed as follows: the Muslim population – 80, Armenians – 21, Russian – 10, Germans, Jews, Georgians and Poles – one seat each”. The election process to the unicameral parliament was supposed to be carried out as follows:  “The backbone of the parliament were 44 members of the former National Council, another 36 Muslim members were elected from cities and counties from among the former national committees. In those counties where there was no municipal government and national committees, members could be elected by the Congress of representatives of rural communities”.  Parliamentary elections were carried out in secret. December 7, 1918, ADR opened the first parliament in the Muslim East.  Chairman of the Azerbaijani Parliament was elected Alimardan Topchubashov, and his deputy was elected Hasan bey Aghayev. 11 factions and groups were represented in the Parliament. Parliament’s activity was regulated by “Mandate of the Azerbaijani Parliament”.  According to the Mandate of the Parliament sessions were held in the Azerbaijani language. Representatives of other nationalities were allowed to speak in Russian. Parliament’s composition has undergone changes, but the total number of deputies did not exceed one hundred people. Forming already a new government on December 26, 1918, under the chairmanship of Khoyski, December 28, 1918 General Thomson made a declaration which stated: “In view of the formation of an Azerbaijani coalition government under the chairmanship of F. Khoyski, I declare that the Allied command will give full support to this government as the only legitimate local government within Azerbaijan”. Thus, the government has achieved recognition from the British Command. In many ways, this recognition has been dictated by the presence of certain British political and economic interests, particularly by the interest in the Baku oil.

Parliament’s activities have been directed towards the solution of socio-economic and financial issues, and to ensure political and territorial integrity of the republic. During the activity of the parliament it received more than 270 draft laws to review, 228 of which were approved. Parliament adopted a number of laws that promoted the development of democratic values in the country, such as, on citizenship (thereby equalizing the rights of all citizens of Azerbaijan regardless of their nationality and religion), on universal military service, on the press, on the Establishment of the National State Bank, on the opening of the Baku State University (the first university of the European type in the Muslim East), electoral law (which gave not only men, but also women the right to vote, Parliament officially removed religious leaders from political activity, strictly limiting their activity to only the spiritual sphere) and so on. Four month prior to the sad day of April 28, members of the “Musavat” party and a group of non-party members (12 people) have gathered in the office of F. Khoyski. Musavatist Ministers headed by Prime Minister N. Usubbeyov were also present. At this meeting, a program was suggested, one of the paragraphs of which reads: “To dissolve parliament and give the government broad powers in foreign policy and national defense”, where it was further suggested to “call for the Constituent Assembly elections in 6 months”. This was due to an extremely unstable position of government, frequent political crises caused by inter-party strife, which interfered with government’s normal workflow and defense of the country. Unfortunately, these changes were not to be. Difficult international environment, coupled with the above mentioned reasons, led to the Soviet Russian invasion of Azerbaijan and the country’s occupation on April 28, 1920, power has passed into the hands of the Bolsheviks. The last session of Parliament was held on April 27, where it was decided to transfer the power to the Bolsheviks. During its 17 months of existence the Parliament held 145 meetings. 15 meetings were not held due to the lack of quorum.

It seems to me that, summing up the activities of the Azerbaijani Parliament, it can be summarized by the following lines: “Now, considering the experience of Parliament of ADR, we must not forget that its policies and activities were originated in harsh, extremely turbulent conditions      , hence the dramatic nature of many events, failures and omissions. The lack of parliamentary experience brought a certain tension into the work. It was unacceptable, for example, to supplant pivotal, crucial problems of nation-building with local, private issues, even though they emerged from a living, actual reality. And so our address to the past is not only important in terms of succession, but also in need and ability to learn from mistakes and errors”.

Resettlement policy of the Russian empire in the Caucasus Part II