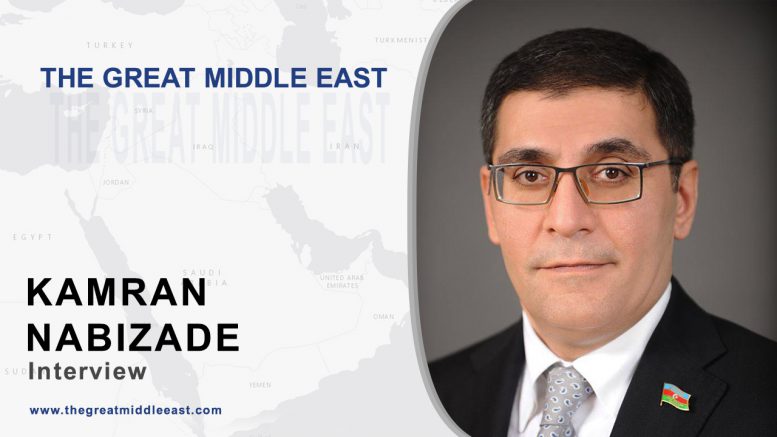 Next year Azerbaijan will host the Islamic Solidarity Games, and already this year the country will hold a referendum on introducing important changes in the country’s constitution. We touched on these topics in our interview with a member of the Milli Mejlis (Parliament) of Azerbaijan Kamran Nabizade.

Yes, you are absolutely right, the fall in energy prices has brought its own adjustments to economic course of the country, but, in spite of the ongoing global processes, Azerbaijan’s GDP continues to be more than 60% of the total of the three South Caucasian countries. As a result, competent and purposeful policy of the country’s leadership managed to avoid the negative impact of falling oil prices, changes were made to the tax and customs legislation of the country, the country is in the process of liberalization of the economy. Azerbaijani President Ilham Aliyev in his economic program, which was announced earlier this year, outlined some of the priorities in the development of the national economy, chief among which is the policy of developing the non-oil sector, the revival of entrepreneurial initiative. The government has embarked on a course of intensive development of sectors such as agriculture, tourism, ICT, pharmaceuticals. New technological, industrial and agricultural parks are opened, where all the necessary conditions for effective entrepreneurial activities are created. Work is being actively carried out to attract foreign investment in these sectors. All this leads to the conclusion that, as in 2008, the global economic crisis, though did not bypass Azerbaijan, but did not critically impact the country’s economy either.   It is appropriate to note that the country’s economy is socially-oriented, but at the same time, the fall in energy prices did not affect the performance of the State’s social commitments.

In 2017, the Azerbaijani capital Baku will host the Islamic Solidarity Games, and Azerbaijan has already hosted the Eurovision in 2012 and the European Games in 2015. In your opinion, how will these games influence Azerbaijan’s image in the Islamic world?

It is no longer secret that Azerbaijan is a leading country of the region, and strongly indicates its political and humanitarian priorities. In this aspect, it is very natural that our country hosts major political, cultural and sports events of global importance with dignity and significance. In addition to the events mentioned by you, I would have brought as an example the 7th Global Forum under the auspices of the UN held in April this year, The Humanitarian Forum, which will be held later this month. Evidence of Azerbaijan’s success in the sports arena is reflected in the results of the 2016 Summer Olympics in Rio de Janeiro, where our country was ranked 14th in the world and 1st among Islamic states in the total number of medals, and took 1st place in the team event in freestyle wrestling. All this shows that Azerbaijan has found its place in the list of the leading sports countries where youth and sport is given a lot of attention. Speaking of the highest level of the previous sporting and cultural events, I would like to mention the World Chess Olympiad held in the beginning of September in Baku, all delegations and guests noted the excellent level of organization. In 2017, Baku will host the Islamic Solidarity Games, and in 2020 will host three group matches and a quarter-final game of UEFA European Football Championship. I am sure that these sporting events will be organized at the highest level, and it is natural that every such event improves Azerbaijan’s image not only in the Islamic world, but also in the world community as a whole. I take this opportunity to invite all our readers to visit Baku and enjoy the atmosphere of these sporting events, the beauty of Baku and hospitality of our people.

Soon Azerbaijan will hold a referendum offering changes to the constitution. What amendments are proposed to be made? What does it mean for the country?

The Constitution of independent Azerbaijan was adopted in 1995. Processes occurring thereafter, both domestically and in global geopolitics, necessitated the constitutional reforms in 2002 and 2009. The changes which are the subject of a referendum now pursue the same objectives. In total 29 amendments are proposed, 6 of which are innovations.  The proposed changes cover a wide range of constitutional norms, in areas such as the organization of the armed forces of the country, human rights and civil liberties, the right to equality, right to property, the protection of personal information, and institutions of state authority. I would like to focus particularly on some articles that interest the public the most.  Thus, in the 25th article of the Constitution it is proposed to replace the word “nationality” with the words “ethnic identity”. This change is due to the fact that the word “nationality” in international law refers to nationals, which greatly reduces the capacity of understanding of the article. This change serves to promote the constitutional rights of all peoples and nationalities of the multinational Azerbaijan.

Another important change is proposed in Article 29 and relates to property rights. A new addition in this article proposes that “private ownership entails social obligations. For the purposes of social justice and rational use of land, the right to ownership of land may be restricted by law”. This amendment is both of a social and economic nature. It has been repeatedly noted that the irrational use of land for agricultural purposes inhibits the development of agriculture, weakens food security of the state. This change is intended to eliminate current negative trend in this issue.  In response to opponents claiming that this amendment violates person’s right to the property, I would like to say that this is absolutely not the case. The right to property is respected by the state, but it does not have absolute power. Thus, the European Convention on Human Rights directly stipulates that the citizen’s right of property does not detract from the right of the state to enforce laws, which are needed for the state to control the use of property in accordance with the common interests.

Amendments are also offered in the articles related to the age limit of elected citizens and relate to the future of government power. So, in articles 85, 100 and 126 it is proposed to change the lower limit of the age requirement for the citizens of the country from “25”, “30” and “35” to “18” for all categories of elective positions.  According to this amendment, every citizen of Azerbaijan who has reached voting age can be elected to judicial authorities, parliament and become President of the country. This change is intended to ensure full participation of youth in social and political life of the country, liberalizes the electoral system of the state and is a great incentive for the future generations in Azerbaijan. By the way, the Venice Commission as well, under the European Council, after examining the experience of the electoral system in many European countries, came to a recommendatory conclusion about the effectiveness of elimination of the lower age limit for elective positions.  In the electoral system of many developed European countries there is no such restriction.

Another important change in the Constitution is the amendments to Articles 101 and 103, according to which the presidential term is being prolonged from 5 to 7 years, as well as the institution of vice-presidency is being introduced. These changes will improve the efficiency of the public administration system, accelerate the speed of decisions made at the state level, and ensure the execution of government programs and objectives in the long term. At the institutional level, the introduction of the new positions of Vice Presidents of the country will strengthen the vertical of power in order to effectively manage the socio-political, humanitarian, administrative processes in the state, as well as provide further economic growth of the country. Another important factor is that frequent presidential elections entail additional budget expenditures, and divert public resources of the country from addressing current challenges. Perhaps that is why a number of countries have moved to a 7-year presidential term, such as Austria, Italy, Finland, Israel, Mexico, Russia.

Public opinion polls conducted by several independent organizations from the US and Europe show that the vast majority of the population approves and supports the changes proposed to the Constitution and submitted for a referendum. I am sure that these constitutional changes will serve to further development of the political and social system of the country, the expansion of the rights of its citizens and economic prosperity of Azerbaijan.

The First Lady of Azerbaijan does it all

A is for Azerbaijan: childhood dream didn’t disappoint

Be the first to comment at "Kamran Nabizade: Azerbaijan, as a leading country in the region, strongly indicates its priorities"