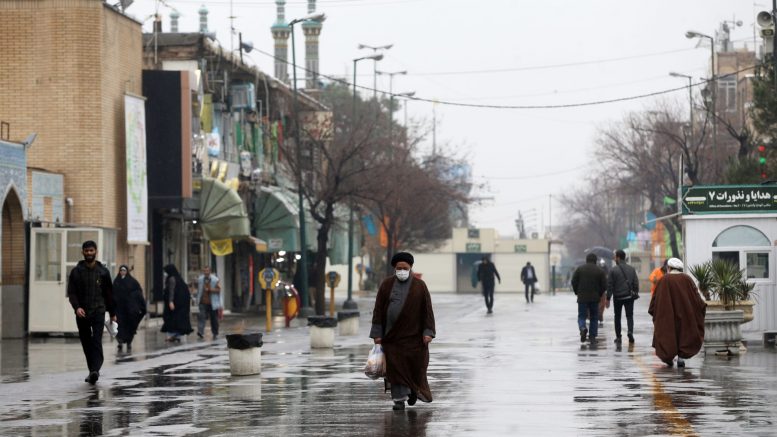 A man wears a respiratory mask after deaths and new confirmed cases revealed from the coronavirus in Qom, Iran on February 25, 2020. Stringer | Anadolu Agency via Getty Images

The Iranian regime has a number of threats to deal with;

*Minority rights – Iran is not ethnically homogeneous. Ethnic minorities (Azerbaijanis, Arabs, Kurds, Baloch, etc.) make up nearly half of the population. Unlike the members of the ethnic majority, the minorities are subjected to double oppression; they are fighting for their rights and freedom.

*Regional challenges – Iran has tense relations with Israel, Saudi Arabia, and a number of the Gulf countries. Undoubtedly, these countries support Iran’s enemies within their capacities and contribute to the isolation of Iran.

*USA – Along with Israel, the US is a perennial enemy of Iran. Anti-Americanism is one of the main pillars of the Iranian regime. The regime is seeing the plots of Washington to overthrow the Mullocracy almost everywhere, the US sanctions have hit Iran’s already infirm economy hard. Washington’s latest steps towards limiting Iran’s opportunities to sell its oil and oil prices collapse plunge Iran into even bigger chaos and poverty and, therefore, threaten the regime’s resilience.

*Ecology – Inefficient use of water coupled with successive years of drought caused severe problems for Iran’s agriculture. Last year, drought was suddenly replaced by torrential rains. That led to severe floods, so if the drought exposed the inefficiency of Iran’s irrigation system, the floods demonstrated fundamental errors in urban construction and planning.

At the time, Iranian foreign minister Javad Zarif with his usual impudence, was accusing the US of “economic terrorism” and was demanding to lift the sanctions against his country. Other Iranian officials claimed that the consequences of the floods were catastrophic due to US sanctions.

*Coronavirus – This year, in addition to all its problems and enemies, Iran is suffering from Coronavirus. Along with China, Italy, and Spain, Iran has become the country most affected by Coronavirus.

Pandemic coronavirus exposed all deficiencies of the Iranian regime; corruption, poor management, cynicism towards the health and lives of its citizens. Iran is one of the worst-affected countries. According to official figures, 73,303 got infected in Iran so far, 4,585 of them died. However, due to objective and subjective reasons, I do not believe in official figures provided by the Iranian government. The Iranian regime is inclined to conceal the results of its errors and oversights; this method was used this time, as well, and the figures were adjusted by the government, to cover up the real extent of the catastrophe.

There are also many deaths among those people who didn’t turn to hospitals.

On March 17, Dr. Rick Brennan, Director of Emergency Operations in the World Health Organization’s, having returned from Iran, declared that the real number of deaths is five times more than reported.

The high mortality rate in Iran has partially resulted from poor conditions and underinvestment in the healthcare system. Although Iran is spending billions of dollars on its destructive activity in the Middle East, Iran’s medicine is suffering from budget cuts.

On the background of the catastrophe in Iran, the authorities have asked the IMF for 5 billion dollars emergency funding.

Following the old tradition, the Iranian regime accused the US of the current situation and began to replicate conspiracy theories.

Iranians explain the situation in their country, claiming that the US sanctions weakened the economy and prevented from taking active measures against pandemic coronavirus and its consequences.

The US official has repeatedly stated that Iran can purchase goods, drugs, and medical equipment.

However, despite “the lack of funds to purchase drugs,” the regime allocated an extra 200 million euros for Quds Force.

It looks weird that despite great wealth (95 – 200 billion dollars by various estimations), the Iranian authorities are begging the IMF for 5 billion.

The apogee of this “Theatre of the Absurd” was the rescindment of approval for Doctors Without Borders to deploy a portable hospital near Isfahan, to help fight coronavirus.

As we can see, the results of pandemic coronavirus for the citizens are not crucial for the Iranian regime. Against the catastrophe in the country, the regime continues its and proxies’ activity in Iraq, Lebanon, Syria, and other points of the Middle East.

As the world awaits Iran’s next move, one thing is now certain; US military deterrence is back

A Guide for Middle Eastern Think Tanks to Accompaniment the Global Changes in Infrastructure and Behavior: COVID-19 as a Chance