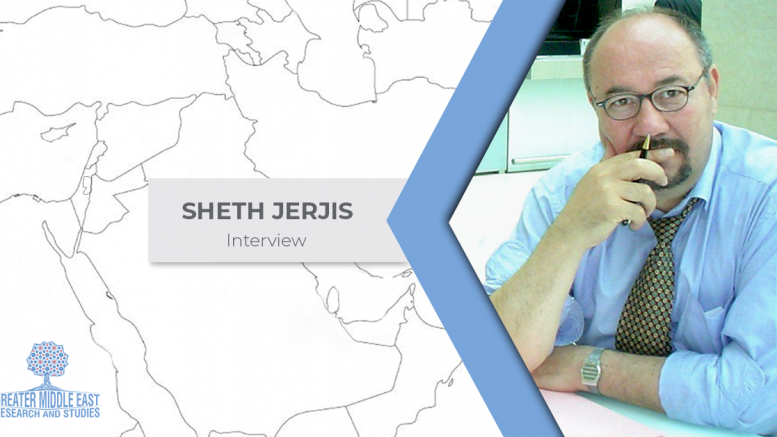 Instability in the Middle East, including Iran, Iraq, and Syria, creates difficulties for the entire population of these countries; however, sometimes, minorities become victims of repression, massacres, or political games.
One of such minorities, who inhabit the countries mentioned above, is Iraqi Turkmen
We discussed the current state of Iraqi Turkmen with Sheth Jerjis, Chairman of the Iraqi Turkmen Human Rights Research Foundation.
We know that during the reign of Saddam Hussein, Iraq’s government was taking measures to assimilate Turkmen and change the ethnic composition of cities densely populated by Turkmen.

What is the situation in today’s Iraq?

The population of the Turkmen of Iraq is almost half Sunnis and half Shias, their regions located between the mainly Sunni Arabic and (Sunni) Kurdish regions in the North and middle of Iraq.
The Turkmen, who were marginalized and exposed to assimilation policies during the Baath regime, continued to be under worst condition after fall of the Baath regime when the occupation authorities and the Kurdish parties were mainly ruling Iraq, and the Turkmen regions remained under the administration of Kurdish parties and Kurdish Peshmerga militias.
In addition to marginalization in the regional and state administrations, their region exposed to demographic changes and aggressive attacks of anti-occupant Sunni extremists and Baathists, particularly Turkmen Shiite regions in the North and west of the Kirkuk province and the Nineveh province.
The horrible situation of the Iraqi Turkmen started to be relatively improved:
a. With the progress in the improvement of the general security condition in Iraq.
b. With increasing the role of the Shiite parties and appearing of militia groups, which both include a significant number of Turkmen individuals, leaders, and politicians. This took place mainly after a decade of occupation after the defeat of ISIS.
Turkmen of the Kirkuk province had suffered severely during the Kurdish administration of the Kirkuk province from 2003 until 2017: more aggressive demographical changes, marginalization in administration, economic negligence, kidnappings, and raiding of houses.
This era was ended by entering the Iraqi army into Kirkuk province after the Kurdish referendum of independence on 25 September 12017.
Today, the Turkmen of Iraq suffer mainly:
a) From marginalization in administration in their regions and the state,
b) From having many difficulties in teaching in their mother language,
c) From sever demographical changes of their areas by both Kurdifications and arabifications
d) From the inability to return vast Turkmen agricultural lands, which were confiscated by the Baath regime
e) Hundreds of thousands of displaced Turkmen could still not returned to their home

It should be known that the Turkmen political system remained under the hegemony of Turkey since its birth in 1991. Due to the exploitation and misuse by Turkey, the Turkmen political system remained ineffective for all its 30 years of life, and it is almost completely collapsed for the last decade when the meetings of the Front’s executive committee stopped, other than some of the sessions on the orders of the Turkish intelligence to mislead the Turkmen people that the Iraqi Turkmen Front is active.

The tension between Kurds – Turkmen was surfaced during the 14 July massacre in 1959, which was committed by the communists and Kurdish politicians. It can be attributed to the following factors:
a. Turkish – Kurdish animosity, attacks on the Kurds in Turkey
b. Kurdish irresistible demand to own oil-rich Kirkuk province
c. The Kurdish politicians stood with communists and the Turkmen politicians with the conservative nationalists

After the Qassim’s period (1958-1963), the Kurdish politicians remained in the mountains fighting the Iraq government until 1991, during which the Turkmen had no political organization, and there happened no event to bring the Turkmen, and the Kurds face to face.
In the Safe Haven, the politicians of both sides came face to face, but the conditions were very different from that of 1959.

Being under the hegemony of Turkish offices, the almost only and large Turkmen political organization, the Iraqi Turkmen Front remain as a poppet, could not guide an independent Turkmen policy.

In 2010, Erdogan started to draw back Turkmen dossier from the army, and Erdogan’s policy toward the Kurds was other than the military and former Turkish governments. Erdogan forced the Iraqi Turkmen Front to guide a good relation with the Kurdish region.

The activity of ISIS in Iraq and the acquisition of territory densely populated by Turkmen led to the displacement of a part of the Turkmen population. In your opinion, how has the emergence and expulsion of ISIS affected the Iraqi Turkmen?

The vast Turkmen regions, with almost a million population, in the west of the province of Nineveh, entered under control of the Islamic state. A significant percentage of Turkmen population there are Shiite Turkmen, who savagely were treated by IS.
The western part of the provinces of Kirkuk, Salah al-Din and Diyala included a large number of Turkmen districts, sub-districts and villages, which were either controlled or continually attacked by IS — noting that a significant percentage of Turkmen populations in these provinces are of Shia sect.
The displaced Turkmen population from Turkmen regions in Mosul province BEFORE and After IS can be accounted for by a few hundred thousand, almost half of them could still not return.
The Number of the displaced Turkmen in the other provinces caused by IS can be accounted for 150 000, almost 80% were returned to their home.
In no Turkmen regions mentioned above, the reconstruction and improvement of the standard of living are performed.

First stage: The extremist religious Islamic groups from all sides, mainly Al Qaida, moved towards Iraqi to fight the western occupation powers, which entered Iraq and removed the Baath regime.
In the beginning, the large Iraqi Shiite parties lacked the political and administrative experience. By the time these parties started to dominate the Iraqi parliament and Iraqi administration. These Shiite parties have strong relations with Iran, and some of them were established by the Iranian government and are still under the direct command of Iran.
Second stage: a few years after the fall of the Baath regime, the sectarian hatred between the Shiite and Sunnis surfaced and intensified. Then the main direction of the battle changed from the fighting of the occupation to the sectarian Sunni – Shia battle and Sunnis fighting of the blatant interference of Iran into the administration of the Iraqi state.
In the first stage, the Sunni fighters were getting financial support from the strict Islamic communities.
The neighboring countries such as Turkey and Gulf countries were working to organize politicians and political parties of the extremist Sunni groups.
The effective appearance of Turkey’s (Erdogan’s) intelligence service between the extremist groups started gradually to bother some of the gulf countries, particularly Saudi Arabia.
In the second stage, to encounter Iran’s domination of the Iraqi state and regional administration, particularly in Baghdad and south of Iraq, the supports to the Sunni Extremists were intensified by Erdogan’s and the Gulf countries.
The Arab spring in Syria got sectarian nature after few months from the beginning that had further intensified all types of support of Erdogan and Gulf countries to the extremist Sunni groups in the Iraqi and Syrian Sunni provinces. Thousands of trucks full of weapons and ammunition and militants Islamic extremists from all parts of the world were brought by Turkish intelligence authorities through the Turkish border with Syrian into North of Syria from there to Sunni provinces in Iraq. The extremist Chechens, Afghans were landing in Ankara Airport, from there directly to the border of the Turkish province of Hatay then into Syrian. Those from Europe were quickly crossing turkey into Syria.
The irresistible desire of Erdogan and Qatar to support the Syrian extremists had further frightened the Gulf countries mainly, Saudi Arabia and Emirates.
It seems that the support of Sunni extremists by Erdogan and Gulf countries was arbitrary and ill convinced, which lead to the appearance of the Islamic State of Iraq and al-Sham, which guided an ideology inconstant with the policy of neither Turkey nor Gulf countries.

It should be known that the Sunnis are making up the majority of the Syrian population (About 70%), a large percentage of this Sunnis are strictly religious from the society of Muslim Brotherhood, the society to which Erdogan belongs.
With the appearance of ISIS, except Qatar and Erdogan, the Gulf countries stopped supporting the extremists in Syria and Iraq.
In the third stage, the Belligerents between themselves (Sunnis, Shias, supporting countries, and occupation authorities) left the fighting between themselves and started to fight ISIS. Under these circumstances, the defeat of ISIS was inevitable.
In this stage, both the coalition authorities and Gulf countries closed eye to the Iran activities inside Iraq, and Iran started to take part in fighting the Islamic state. In this stage, al Hashd al-Shabi militia groups were established accounting to hundreds of thousands and organized almost entirely under the control of Iran.
The aggressive nature of the ISIS leadership and their fight to the death and the vigorous counteraction of the Coalition authorities and Shia militias led by Iran had destroyed Islamic State with significant damages to the Iraqi provinces where IS was found.

How do Iraqi Turkmen identify themselves right now? Do they link their future to Iraq, or maybe they would like to live in another country, or even in their state?

The Turkmen of Iraq entered into Iraq under the name of Oguz and Turkmen tribes; their establishment continued slowly from 674 AD until the completion of Mongol invasion after 1231 AD.
The number of Iraqi Turkmen is not less than 3 million, and they are living in Iraq for more than a thousand-year. Therefore, they cannot be asked if they would live in another country.
Indeed, the Turkmen of Iraq consider themselves Iraqis. Iraq is a country for 100 years, with boundaries installed and recognized by international treaties. However, the Iraqi Turkmen belong to a robust ethnical sympathy to Turkey.
There is no Iraqi Turkmen group, who publicly announce their intention to be connected to Turkey.
The Iraqi Turkmen do not think that there is a possibility that their regions can be given or conquered by Turkey. Furthermore, there are vast regions populated by Arabs and Kurds between Turkmen areas in Iraq and Turkish regions in Turkey.
The sufferings of the Iraqi Turkmen, mainly during the Baath regime and deprivation of cultural rights, made them wait for help, particularly from Turkey.
However, the Turkish national policy had never paid attention to the sufferings of the Iraqi Turkmen, particularly during the last three decades turkey exploited and misused the Iraqi Turkmen political system and the Iraqi Turkmen.
In addition to that, some nationalist Iraqi Turkmen groups link themselves or the Turkmen of Iraq to Turkey.
I am noting that during the Baath period, many Turkmen individuals and politicians sentenced to prison or death after they were accused of spying for Turkey.

SOITM Foundation has an important report on the violation of Turkmen human rights during Baath regime under the title of “THE SUMMARY OF VIOLATION OF THE HUMAN RIGHTS OF THE IRAQI TURKMEN AND ATTEMPTS TO ASSIMILATE THEM DURING THE DICTATORIAL BAATH PERIOD” which can be reached by the following link:  http://turkmen.nl./1A_soitm/GR.pdf

Turkmen of Iraq mobilise for a future after Daesh – Video

Be the first to comment at "Sheth Jerjis: Turkish national policy had never paid attention to the sufferings of the Iraqi Turkmen"