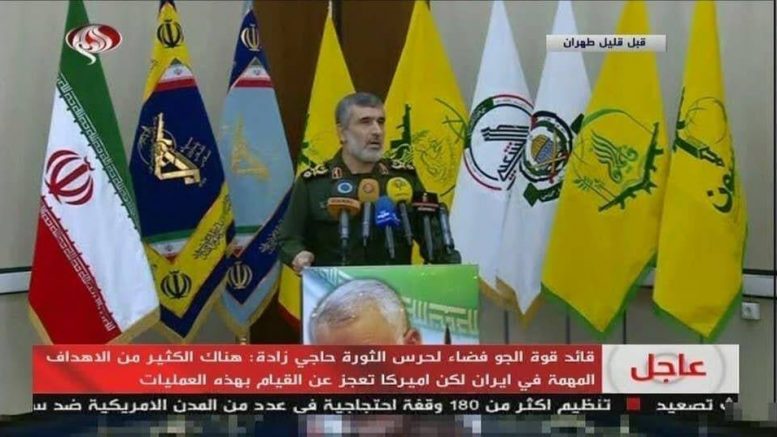 New Qods Force chief, Ismail Qaani, who succeeded the terrorist Qassem Soleimani, in a televised interview and via Iranian websites which published pictures of him, announced that the resistance movements will respond to the US and its allies.

The Iranian state has worked to promote the concept of global resistance since the first moments following the death of general Qassem Soleimani, which is aimed to incite the Iranian proxies in the region.

It is also a reference to unifying the ranks of the militias and urging its proxies across the world to target the interests of the US and its partners in the Middle East. This comes as the IRGC has placed its affiliated militias deployed to more than one country in the frontline of its conflict with the US and its interests.

Iran significantly relies on those militias in the conflict against the US and its regional countries. Ismail Qaani’s appearance with the flags of the terrorist militias loyalist to Iran, which we will mention in this article, in the background, is nothing but a message from the IRGC to the US that there will be intensified and different operations in the areas where the US bases, troops and citizens exist.

The militias are as follows: The Popular Mobilization Units Hezbollah of Iraq The Lebanese Hezbollah Hamas movement Ansarallah movement Fatemiyoun Brigade Zainabiyoun Brigade Asaib Ahl Al-Haq Saraya al-Salam led by Moqtada al-Sadr This is in addition to dozens of the militias linked to Iran directly.

Qaani placed the flags behind him as a clear indication from the IRGC that there will be a harsh response to the US using these movements which are stationed in more than one spot.

Iran calls them resistance movements. It is a clear admission to the terror acts that these militias will carry out in the coming days, especially in the Arab and Islamic countries. They will key hit US facilities there. The speech of the IRGC chief is considered a proclamation of a clear and unambiguous threat that the resistance movements are the ones who will respond to the Americans.

It is noteworthy that these armed militias are loyal to the IRGC and the supreme leader. The Americans and their allies should hold Iran and its proxies accountable for the dangerous crimes which could take place in the coming days against innocent and unarmed civilians across the Arab world.

They should seek to bring the Iranian irrational behaviors to a stop. They also should work to stop the activities of the criminal and terrorist militias which are loyal to Iran inside Iraq and trying them internationally.

This is in addition to empowering the Iraqis to rule their own country and making the authority to take up weapons exclusive to the army and state. Those who want to stop the terror activities of the Iranian state, they should consider supporting all factions of the Iranian opposition.

By: Younis Suleiman, Ahwazi freelance journalist based in DC

As the world awaits Iran’s next move, one thing is now certain; US military deterrence is back

The Iranian regime has no intentions to stop