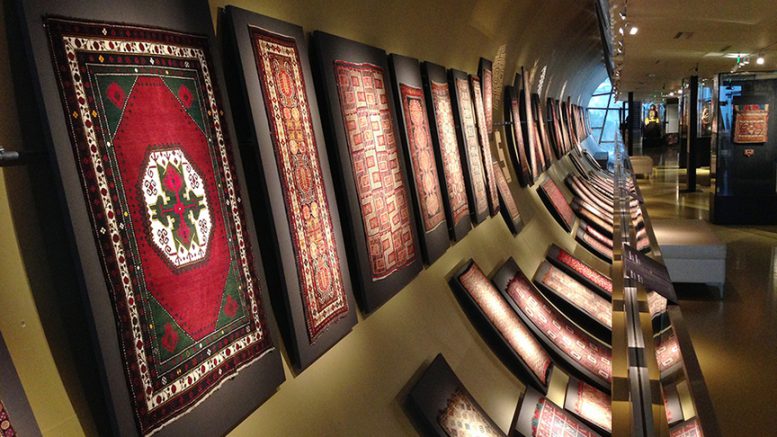 The collection of 100 Azerbaijani carpets of Rosalie and Mitchell Rudnick was sold at Grogan auction in Boston.

The carpets drew the attention of buyers from the United States and Europe.  The highest priced rug was a “Quba” prayer rug, dated 1810. It sold to Boston’s Museum of Fine Arts, haqqin.az reports referring to the US site antiquesandthearts.com.

Another 15 works were sold at a price above $ 10 thousand each. In total, the collection gathered $744,200, yielding an average of over $7,400 per lot. There were about 100 bidders in the room, several phone lines were in use and internet bidding was available on two platforms.

The Rudnicks began collecting carpets in the early 1980s while traveling the world. The carpets were purchased in Istanbul, Milan, Paris, London, Munich, as well as from numerous US dealers.  They created an extensive reference library, which was also sold at the auction. Their carpets have been exhibited in several exhibitions.

Carpets from the Rudnick collection were made in the 19th century. Antiques and The Arts presents them as “Caucasian”, however, the titles speak for themselves – “Mugan “,” Shirvan “,” Qazakh”, “Soumac”, the above-mentioned “Quba” and others…

“There are identifiable differences between rugs made in different villages, – says the site. –  The rugs were woven by women and the skills, and sometimes the patterns, were passed from mother to daughter. Sometimes rugs are dated with Arabic numbers. The dates reflect the Islamic lunar calendar. The most desirable rugs tend to be earlier examples, made closer to 1800, made with native, not chemical dyes. Many of these rugs were made for personal use in the homes of villagers, but as the century progressed, many rugs were made to be sold to traders, who often asked for particular designs”.

Going back to the auction, the sale started with a selection of “Soumac” bag faces of the beginning of the 19th century, which sold at $33,550 and $39,650. This is about four times the initial price.

Ilham Aliyev on the new stage of space industry in Azerbaijan

Be the first to comment at "Azerbaijani carpets sold at an auction in the US for $744.000"