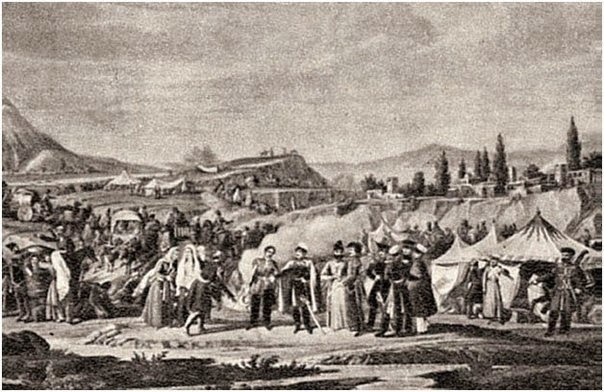 The XVIII-XIX centuries were a turning point in the history of the Caucasus. The centuries-old struggle of the leading states of the world for the region ended with the victory of the Russian Empire, which under Peter I turned into a maritime power. Opening a “window” to Europe, the emperor-reformer sought to expand the boundaries of the empire in the southern direction. However, in the beginning of the XVIII century, the matter of access to the Black Sea was closed for Russia and Peter I turned his attention to the Caucasus.

As a result of the Caspian campaign of Peter I (1722), the western shore of the Caspian Sea had been conquered, and the Istanbul Treaty (1724) consolidated these Russian conquests in the international system. However, regime of “bironovshchina”, established in Russia after the death of the Emperor, not interested in the Caucasus issue, signed Rasht (1732) and Ganja (1735) treaties and abandoned Peter’s conquests. But the Empress Elizabeth Petrovna purposefully continued the work of her parent. During her reign, the Black Sea problem and the issue of the Caucasus has become a top priority of Russian foreign policy. Over time, already under Catherine II, after the Russian-Ottoman war of 1768-1774, the Treaty of Küçük Kaynarca (1774) has strengthened Russia’s position in Crimea and on the Azov coast, completely incorporating Kabardia into the Russian Empire, thus expanding the scope of its influence in this horonime.

The struggle for the Caucasus continued even after the ratification of the Treaty of Küçük Kaynarca. In 1783, Crimea became part of Russian, and it gained dominance in northern Black Sea Coast.  In the same year it strengthened its position in the South Caucasus, by concluding the Treaty of Georgievsk with the ruler of the kingdom of Kartli-Kakheti Heraclius II, who recognized its patronage and abandoned his right to independent foreign policy.  With the accession of the Kingdom of Kartli-Kakheti in 1801, Romanov’s Russia, without hiding its true intentions, set foot on Azerbaijani soil. The Qajars, which tried to oust Russia from the mega-region with the support of Western countries, began military operations, but the two Russian-Iranian wars ended with the victory of the Russian Empire, and after the Treaty of Turkmenchay (1828) the autocracy included the South Caucasus to its political and geographical space.

To subdue the Caucasus, the tsarist government has been implementing a colonial policy already in the process of conquests, the essence of which was the assimilation of the local population and the transformation of the mega-region into an integral part of the Russian Empire. The main components of this strategic course were the Christianization and immigration policies.

While launching a campaign to conquer the Caucasus, Russia has clearly realized that the captured Muslim region will be the weak link in the country, because confessionally alien population will not tolerate foreign invasion. The ruling circles of the Empire clearly understood: a recalcitrant region can be controlled not at the point of a bayonet, but with the help of religious rapprochement between mother country and colony, to be exact – the infiltration and enforcement of Christianity. Therefore, at the end of the eighteenth century, they created the Ossetian Theological Commission in Tbilisi, defining its main task as the spread of Orthodox Christianity among the Muslims of the Caucasus for its rapprochement with Russia. At the same time, representatives of Non-Orthodox faiths were also engaged in missionary activity in the Caucasus. Society of Scottish Missionaries, established in Astrakhan, June 22, 1815 by decree of the Minister of Internal Affairs, conducted their activities in a narrow geographical area, in the coastal strip of the Caspian Sea, and its main objectives were spreading and preaching of the Gospel on the mentioned territory.

Azerbaijan in the context of Caucasus policy of the Russian Empire: from Peter to Pavel Part II