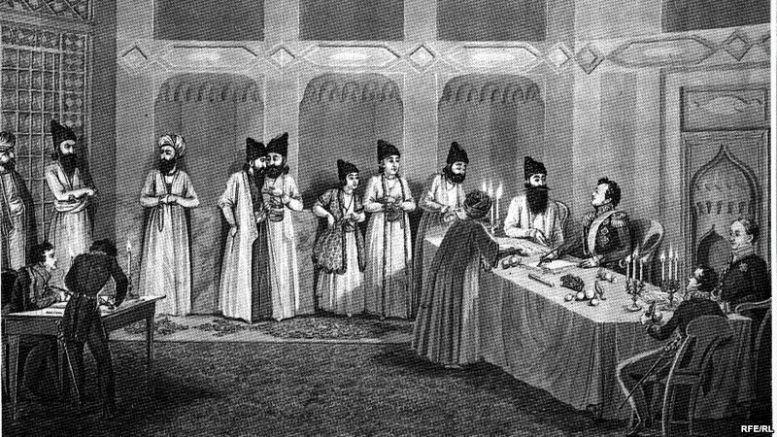 In the last quarter of the XVIII century the political situation in Qajar Iran was stabilized to a certain extent. Agha Mohammad Shah Qajar, after reinforcing his power in Iran, could not bear to watch the rapid march of Russia in the Caucasus, which after the Treaty of Jassy (1791) did not hide its true intentions in respect of feudal units in the South Caucasus. In order to prevent seizure of the South Caucasus by the Russian Empire, Agha Mohammad Shah Qajar made a military campaign to the Azerbaijani lands and the Kingdom of Kartli-Kakheti.  In her turn, Catherine II, does not hide her political plans for the Azerbaijani lands and sends Russian troops under the command of Count V. Zubov into the region. Without giving up the Caucasian policy of Peter I, and underlining the already inscribed southern contours of foreign policy in order to establish political dominance in the South Caucasus, Russia included Christian factor in its plans, realizing the importance of formation of a social base in an area dominated by the Muslim population. And the “Armenian issue” was Russia’s trump card in the political combinations of the empire. At the same time, Zubov’s campaign (1796) provided the impetus for the intelligible Armenian dream, and the Armenian-Gregorian church in particular, which tried to include the “Armenian issue” into the foreign policy priorities of Catherine’s Russia. Archbishop Joseph Argutinsky takes part in Zubov’s military expedition, trying to infiltrate the expedition plans in hopes of implementing one of the projects of the “Armenian issue”, created by him.  But the sudden death of Catherine II has suspended Zubov’s military expedition, an integral part of Caucasian policy of the Russian Empire.

Taking into account the above, we state: The Russian Empire, in this chronological framework, has purposefully and gradually pursued the Caucasian policy in the region. In order to establish its political power, based on the Christian factor, Russia included the policy of resettlement and Christianization in the priorities of the Caucasian policy, by establishing Christian missions in the middle of the XVIII century.  The successors of Peter I, without giving up his inscribed contours in the expansion of the southern borders of the empire, have actively pursued Russia’s Caucasian policy in the region. And during the course of this policy, the empire has fragmentarily included the “Armenian card” in its political combinations.

Citizens of OIC states to get education grants in Azerbaijan

Kerry: US and Russia are working together on Karabakh

Is Azerbaijan open for halal tourism?

Be the first to comment at "Azerbaijan in the context of Caucasus policy of the Russian Empire: from Peter to Pavel Part III"