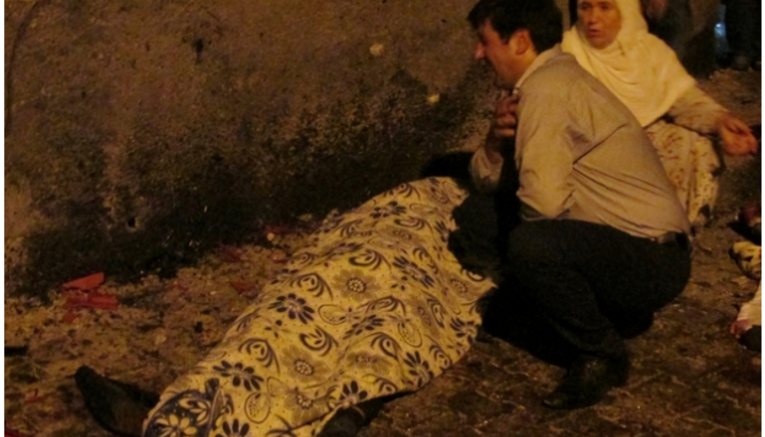 Turkish President Recep Tayyip Erdogan said on Sunday a suicide bomber aged between 12 and 14 was responsible for the attack on a wedding in the Turkish city of Gaziantep that killed at least 50.

“The explosion was the result of a suicide bomber aged between 12 and 14 who either detonated (the bomb) or others detonated it,” Erdogan said during a press conference from Istanbul. He repeated his assertion that initial information suggested the attack was perpetrated by the Islamic State group.

At least 50 people were killed and 94 wounded when a suicide bomber targeted a wedding celebration in Gaziantep on Saturday.

“The number of those killed in the terrorist bombings is, as of today, 50,” the office of governor Ali Yerlikaya said in a statement, raising a previous toll of 30.

A Turkish prosecutor told AFP that remains of a suicide vest was found at the bomb site where the attack took place.

Ambulances raced to the scene and video footage from broadcaster CNN Turk showed police and emergency services workers rushing through packed streets in the city.

The attack appeared to have hit when a large group of people from a wedding party took to the streets in celebration, security sources said.

“We wish God’s mercy for those who have lost their lives in this cruel attack, and for the injured a quick recovery,” the Gaziantep provincial governor’s office said in a statement, confirming the death toll.

“We strongly condemn this cruel terror attack and those carrying it out.”

Mahmut Togrul, a member of parliament for Gaziantep from Turkey’s pro-Kurdish Peoples’ Democratic Party, told Reuters it was a Kurdish wedding. IS has been blamed for suicide bombings on Kurdish gatherings in the past.

Turkey faces multiple security threats from IS militants at home and across the border with neighboring Syria as well as from the outlawed Kurdistan Workers’ Party (PKK).

Three suspected IS suicide bombers killed 44 people at Istanbul’s main airport in June, at that time the deadliest in a string of attacks in Turkey this year.

Violence flared up again this past week in the largely Kurdish southeast, with bomb attacks leaving 10 people dead in separate attacks, mostly police and soldiers, in an escalation that officials blamed on Kurdish PKK militants.

Turkey’s restive southeast has been hit by a wave of violence since the collapse of a more than two-year ceasefire with the PKK in July last year. The PKK has since carried out dozens of attacks on police and military posts in the largely Kurdish region.

“The aim of terror is to scare the people, but we will not allow this,” said Deputy Prime Minister Mehmet Simsek, who represents Gaziantep in the Turkish parliament.

“It is barbaric to attack a wedding,” he told Turkish television.

A major city lying just 60 kilometres north of the Syrian border, Gaziantep has become a major hub for Syrians fleeing the civil war in their country.

But as well as refugees and opposition activists, there have long been fears it was home to a significant militant presence.

The blast in Gaziantep came on the day Turkish Prime Minister Binali Yildirim vowed that Ankara would play a “more active” role in the next six months to solve the more than five-year long Syrian civil war.

In a sign that Turkey’s position is becoming gradually more aligned with Russia and Iran, he added that Syrian President Bashar al-Assad could remain temporarily during a transition period.

Iran and Russia are the main allies of Assad, whereas Turkey has always insisted his exit was a precondition for the end of the conflict.

Turkey was long accused of turning a blind eye to or even abetting the rise of IS in Syria, claims it vehemently denies.

However, Western states say Ankara has begun to move strongly against the group and seal its borders to militant traffic after attacks blamed on IS on its soil this year.