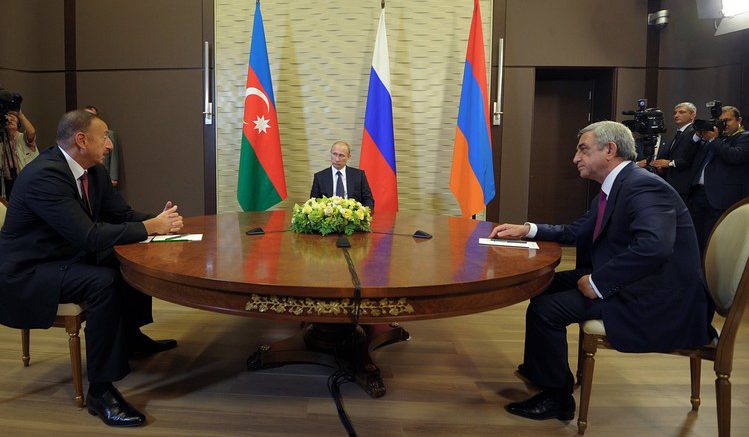 All-Armenian hysteria caused by the union (only on paper) of Russian and Armenian air defense has not yet subsided, as the Yerevan agreed to a new surrender of its powers in the military sphere. Everyone criticized Sargsyan for the transfer of real Armenian air defense leverage to Russians! Mega scam of terrorists from “Sasna Tsrer” alone is enough! A disgrace to the nation, indeed, even for the Armenian, which has nothing of its own left, and it were the soldiers of exactly the country which colonized Armenians that were marching through the capital city during the celebration of the “state independence”!

But “Sasna Tsrer” were put in a cage, where they belong, and calmed down Sargsyan authorized the completion of the execution of the agreement on the establishment of the Joint Group of troops of Russian and Armenian armed forces. In fact, talks of creating such a group were there for a long time, but the signing of the relevant agreement is scheduled, as can be seen, in October, when Vladimir Putin will arrive in Yerevan for the event within the summit and CSTO exercises. By the way, this year Armenia is the chairman of this military organization, in fact, controlled by the Ministry of Defense of Russia.

Of course, the process of enslavement and humiliation of the Armenian province of Russia is continuous and endless. United Land Group was not enough, the scale of which may well cover the whole Armenian army, naturally eliminating the word “Armenian” in this case. So Deputy Defense Minister Anatoly Antonov “pleased” the Armenians, after the talks of the heads of the military departments of the two countries in Yerevan, Russian Defense Minister Sergey Shoigu proposed Defense Minister of Armenia Seyran Ohanyan to sign an agreement on cooperation in the field of identification and evaluation of radiation, chemical and biological conditions in the interest of Joint group of forces of the two countries. This agreement was immediately signed as Ohanyan hasn’t got much choice. More than 50 contracts and agreements were signed in the military sphere between Russia and Armenia, the process of re-subordination of Armenian army to Russia continues.  This Stepanakert cuckold, who personally shot people of Khojaly in 1992, is entirely under the authority of his second wife – trampy Ruzanna and the golden-domed Kremlin. In the second case commands are sent to Ohanyan via Serzh Sargsyan, although direct telephone wire between the defense ministers of Russia and Armenia is not ruled out.

Armenians have graciously agreed to take Russian arms on credit, and Putin pretended that Sargsyan is not deceiving, and the money will be returned. Anyway, Russia continues to distribute national property right and left, forgetting the sad experience of the USSR, which collapsed under the weight of a failed economy. CPSU Central Committee also supported socialist freeloaders around the world, and that pushed the country over the edge.

Let’s look reality in the eye: Russia, terrified by beautifully orchestrated July events in Yerevan, successfully “sweet-talks” the Karabakh problem. The mass terrorist attack on Khorenatsi Street was presented to Putin as a possibility of choice: either “Maidan” in Yerevan with the prospect of parting with Armenia, or the continuation of the occupation of Karabakh. The August events show that the Kremlin pendulum swung towards Armenians. Then, there will be no peace agreement on Karabakh. We will be offered a draft document, impossible for Azerbaijan, with an understanding that President Aliyev will not sign such a useless scrap of paper.

Consequently, the Azerbaijani Defense Ministry should be ready for every development – from the rise of static warfare to new and fierce battles in Karabakh. Recent screening visits by Defense Minister of Azerbaijan Zakir Hasanov to the front line, examinations of troops show the continued training of our Army and its readiness for any surprises. The enemy is arming, but it should be kept in mind that the enemy can hold their secret surprises in the form of weapons, secretly purchased and imported to Armenia from China, US, France and other friendly to Armenia countries. Obviously, if the April hostilities, with their surprise factor for the Armenians, did not give us all the desired tactical outcomes, then the following military operations will not be unexpected for the enemy. Therefore, to achieve the victory, the Azerbaijani army will have to resort to other, more destructive military means that we have available. And to know that the re-subordination of the Armenian armed forces to Russia in the form of established Russian-Armenian military group does not prevent Sargsyan’s army to wage war with Azerbaijan. At the same time, despite the agreement with Armenia, Russian will not help Ohanyan in Karabakh; everyone in Armenia knows it and they have accepted this truth after the April events.

I regret to add: we should be prepared for more extensive losses in manpower and technology. Because we know – there can be no victory without sacrifice.

Be the first to comment at "If the Karabakh problem is getting sweet-talked, then prepare for war"