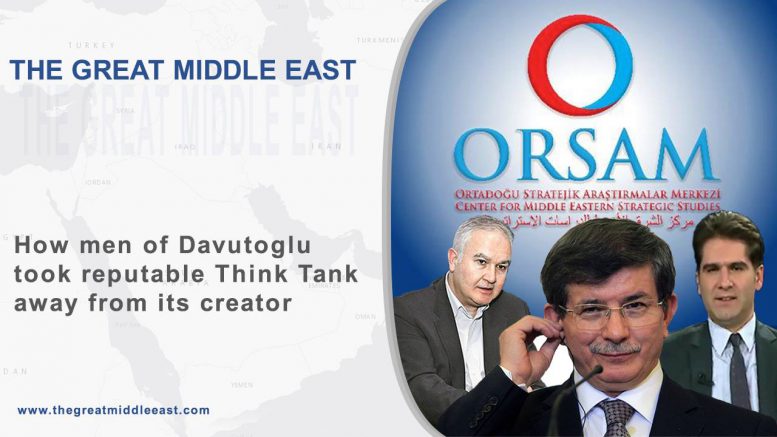 Information in our time means a lot, possessing and having access to the most accurate analytical materials is very important for the political elite of any country, especially if the country is one of the leading players in the Middle East.

A few days ago one of the lead authors of the Turkiye newspaper Fuad Ugur published an article on how the Center for Middle Eastern Strategic Studies (ORSAM) was taken away from its creator.

A well-known analyst in Turkey and expert on the Middle East Hasan Kanbolat created ORSAM in 2008. Within a few years he was able to lead the organization to the international level, and to gain credibility both domestically and abroad.

It is noteworthy that only ORSAM was invited to Geneva for a conference on Syria. However Kanbolat’s success was interrupted in February 2014. Kanbolat received a call from one of Turkey’s ambassadors. The caller informed Kanbolat that Foreign Minister Ahmet Davutoglu is interested in ORSAM and wants to take it. To which Kanbolat responded that he has invested a lot in ORSAM and it will cost a certain amount of money, the ambassador replied that of course this issue will be taken into account.

Two days later Kanbolat received a call from the same ambassador, who informed him that he must hand ORSAM over within a few days. When Kanbolat asked for compensation he was told that there will be no compensation, he must pass ORSAM at no cost.

Kanbolat had to hand ORSAM over to Davutoglu’s men on February 12, 2014.

Kanbolat was placed by Davutoglu’s protege Shaban Kardas. Kardas’ name surfaced in the Turkish media in connection with CIA agents meeting at the Splendid Palace on Buyukada Island near Istanbul. Recall that the meeting was held on the day of the attempted military coup (July 15, 2016), the official topic of the meeting was the issue of Iranian politics. According to Turkish media reports, the meeting was attended by former and current CIA agents (Graham Fuller, Henri Barkey) close to Fethullah Gülen and their Turkish supporters; Shaban Kardas also was among them.  We have obtained a photocopy of a document from the hotel, which contains the names of participants, including Kardas.

It was also revealed that Kardas has long been a roommate with Emre Uslu when he studied at university in Utah. Uslu worked in the police for some time, and then took up journalism. He is known for his close ties with the Islamic preacher Fethullah Gülen. Currently Uslu is being sought by the authorities.

How is it that one of the strongest Think Tank institutions in the country fell under the control of such person as Kardas, it still remains a mystery.

As for Kanbolat, after ORSAM has been taken from him, together with former Ambassador Unal Chevikoz he created a small analytical center “Ankara Policy Center”.

Turkish Military Says It Has Seized Control From Ankara Government

How Turkey Came Crawling Back To Israel

Russia, Turkey pledge to put ties back on track