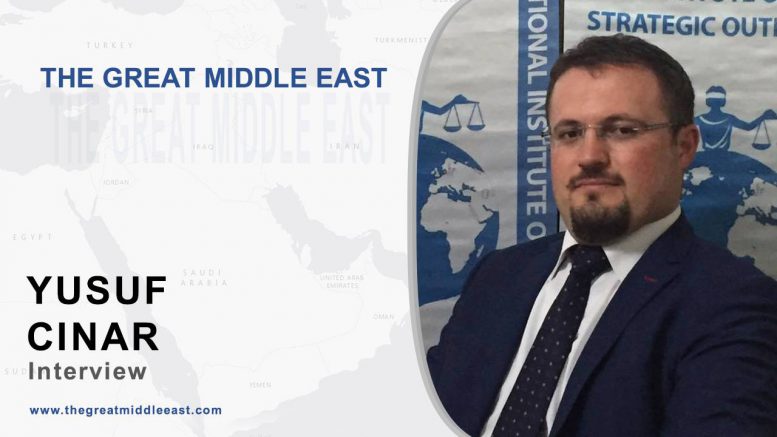 Letter of the Turkish President, the normalization of relations between Turkey and Israel, and, on the contrary, a complication of relations between Turkey and Germany is under the constant scrutiny of international and Turkish media and expert community. In this regard, we offer you an interview with a Turkish political scientist and head of “Strategic Outlook” magazine Yusuf Cinar.

As it is known, Turkish President Recep Tayyip Erdogan recently sent a letter to his Russian counterpart. Some experts believe that, in this way Erdogan is trying to normalize bilateral relations. Do you think that Erdogan will go for more? And what should be expected from bilateral relations in the foreseeable future?

First of all I want to say that Davutoglu’s leave should be taken positively. Because the Prime Minister Davutoglu was a man who for many years formed the AKP policy.  The concept of “zero problems with neighbors” has opened a new era in Turkish foreign policy. However, Davutoglu’s concept of “zero problems” was not effective in the last 4 years. Turkey’s relations with Syria deteriorated, reached the breaking point with Iraq, and we are experiencing turbulence with Iran. In this context, the relationship with Russia is illustrative, which have been at its best level since the Cold War, however, the contradictions between the two countries deepened on the Syrian issue over the past year. The downing of the Russian jet on November 24, 2015 by Turkish fighter was the beginning of the next crisis for Turkey. Turkish President Recep Tayyip Erdogan, in his speeches at international events, referring to 5 permanent members of the UN Security Council, says that the world is bigger than this five. These words are very important in terms of understanding of Turkish foreign policy. Turkey is a supporter of a multi-polar world.  If you look at Russia, they too are talking about a multi-polar world. The downing of the Russian aircraft put at risk the business background, which was build with Russia during 25 years that have passed since the end of the Cold War. In this connection, the removal of an important official from power has helped opening of a new era that promotes the establishment of relations between the countries. The new Prime Minister, Binali Yildirim, at every opportunity, speaks about the desire to see the Russian-Turkish relations at the previous level. These intentions of PM are also supported by President Erdogan. My prediction is that the Russian-Turkish relations will not return to the previous level soon, but there will be some changes. Positive dynamics in the Turkish-Israeli relations are also linked with Binali Yildirim, I believe that his tenure will be the time of “restoration” in Turkish foreign policy.

Turkey, with the purpose of relieving tension, sent Russia a letter expressing its condolences and regret for the downed jet. Russian statements, aimed at the domestic audience, saying that Turkey apologized, are quite normal. The Turkish side, in its turn, explains its public that it was not an apology, but the expression of condolence. Turkey and Russia are big countries, and in such matters, in order not to irritate public opinion, may resort to various tricks. These steps are a good opportunity for the normalization of Russian-Turkish relations. More constructive steps will follow soon. I can say that the new government is doing everything in its power for normalization of relations.

At what stage are the Israeli-Turkish relations at the moment, and do you think that they can back up to the previous level?

As it is known, at the beginning of this month, the German parliament passed a document which described the events of 1915 as “genocide”. How do you think, what is behind it and how it will affect the bilateral relations in the long term?

Germany together with Merkel became the most important country in the EU in terms of decision-making. Germany sees two issues as a threat to the future of the EU. The first threat is the uncontrolled arrival of Syrian refugees in Europe. The second threat is Turkey’s EU membership. If Turkey, with its population of 75 million and economic power, becomes an EU member, Turkey will be one of the main countries in the EU decision-making mechanism. The main EU countries, France and Germany, believe that Turkey is a country with a different religion and culture.

These two countries are concerned that in the case of Turkish membership in the EU they may lose instruments of influence, which they hold in their hands right now. Germany, just like France, by recognizing the Armenian claims, puts forward the idea that Turkey does not share European values, thereby pushing Turkey to self-isolation in relations with the EU.

I believe that the desire of Germany to be the only dominant force in the EU, would lead to the threshold of the collapse of the Union. The locking of such global entity as the EU onto itself, would lead to an increase in Turkophobia in the EU. In addition, strengthening of rightists in such a cosmopolitan entity as the EU will also increase the risk of the collapse of the Union. I think that we will not be able to observe positive dynamics in relations with Germany for a long time to come. It would be wrong to see only the factor of the Armenian claims in the matter of setback in Turkish-German relations. Since coming to power, Merkel, in every way, made it clear that she does not want to see Turkey in the EU. Merkel speaks only about associative partnership with Turkey. The strategy, which Germany followed so far on the issue of agreements on migrant workers and the abolition of visas for Turkish citizens, shows the desire of Germany to prevent Turkey’s EU membership, but to give it some privileges. Based on this, I think, nothing will change in the Turkish-German relations in the near future.