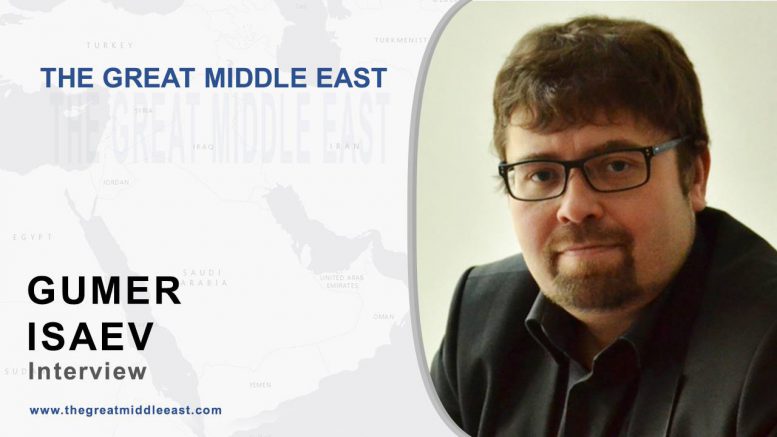 Turkish-Russian relations still remain in the spotlight of many media outlets and experts. TheGreatMiddleEast offers you an interview with Gumer Isaev, the head of Center for modern Middle Eastern Studies in St. Petersburg

Turkish President Recep Tayyip Erdogan sent a letter to his Russian counterpart, on the occasion of Russia Day. Some experts interpreted this as a move by Erdogan, in the direction of normalization of bilateral relations. However, Russian Foreign Ministry spokesman Maria Zakharova criticized Erdogan’s letter and the president’s press secretary, Dmitry Peskov, said that it should not be responded to. What do you think, was it a step towards normalization, or simply a regular protocol practice?

The Turkish leadership reacts flexibly to external challenges. However, this flexibility often borders on unscrupulousness. On the one hand, by having a conflict with Russia and downing the Su-24, Erdogan wanted to play on the sentiments of the Turkish nationalists, acting as a protector of close kin Turkomans in neighboring Syria. Now he openly demonstrates his readiness to normalize Russian-Turkish relations, but does not want to make the required apologies, to avoid losing face in front of the same patriotic electorate. In the conditions of difficult relations with the West, Erdogan is trying to play the peacemaker card, proposing (or supporting) options for the resolution of the Turkish-Russian and Turkish-Israeli crisis relations. The Turks, by the way, have practically agreed with Israel – and this model of the Turkish-Israeli peace process can be taken as an example for the normalization of relations between Moscow and Ankara. In relations with Israel, it was Turkey that considered itself offended, and it took time for the countries to find a way to settle old problems. The important role was also played by the fact that Israel and Turkey are very interested in cooperation in the gas sphere.  The relations between Russia and Turkey have similar aspects. The normalization will require time and, probably, some favorable for Russia proposals from Turkey.

Ankara is actively looking for ways to diversify gas supplies (deliveries from Qatar, Azerbaijan, Iran, the possibility of supply of Israeli gas, etc.). Could it happen that in a few years Turkey will reduce its gas dependence on Russia to a minimum, and then Russia may lose the strong economic and political tool of influence on Turkey?

Russia’s share in gas imports, until recently, was about 60%. Turkey will not be able to reduce dependence on Russia within a short period. But if we talk about the medium-term prospects, Turkey has an alternative to Russian gas and can reduce its share in the coming years. A few days after the incident with the Russian aircraft, the Turkish President and the Emir of Qatar, signed a memorandum on long-term supply of liquefied natural gas to Turkey. December 3, 2015, Prime Minister Davutoglu visited Azerbaijan, to discuss the way to accelerate the construction of TANAP pipeline, which in future will deliver Azerbaijani gas to Turkey and then to Europe.  December 12, 2015, Erdogan visited Turkmenistan, where the gas issues were discussed. In April 2016 the president of neighboring Iran, Rouhani, said that Iran is ready to ensure the energy security of Turkey. At the beginning of 2016 Turkey received its first tanker with liquefied gas from the United States – and many experts say that it is only the beginning.  In addition, we can talk about serious prospects of Turkish-Israeli relations in the energy sector – which is why we see warming between the two countries. All of this suggests that Turkey has ample room for maneuver in terms of strained relations with Russia; it has options to reduce the share of gas purchased from Russia.

I would not say that Russia can use the gas issue as a political tool (or even leverage) in relations with Turkey – it is enough to look at actions of “Gazprom”, which does not want to weaken its position in the Turkish market. Let me remind you that for “Gazprom”, Turkey is the second largest partner in terms of volume of procurement after Germany. A discount for private Turkish buyers that “Gazprom» canceled in January 2016 was back on already in April.  New pipeline project through Turkey, also is only “frozen”, but not closed.  Not for nothing, in June 2016, President Putin said that Russia has not completely abandoned the “Turkish Stream”. I would say that Turkey and Russia depend on each other equally – Turkey needs gas, and Russia needs money and market.

It is better to assess the effects of sanctions at end of the year, with statistical data available. Today, Russia is among the top three major importers (after China and Germany) – in fact, from the sale of gas to Turkey. From 2014, there has been a significant drop in Turkish exports to Russia, aggravated by the events of the end of 2015. I do not think that the Turkish economy in general suffers from the Russian sanctions – but it should be admitted that some sectors have felt their impact. Overall, the Turkish economy is now coming out of a difficult period of 2012-2014. The Turkish GDP grew by 4-6% during 2015-2016.

Now, about the sanctions.  Despite the fact that President Putin spoke about the conflict with the Turkish political elite, which is responsible for downed aircraft, and not with the Turkish people, it should be noted that it were the ordinary citizens in both countries that were hit  by the sanctions in the first place. No wonder the Russian sanctions initiatives are ironically called “tomato war”. Farmers are the ones engaged in agriculture – that is, small and medium businesses. Energy and construction sector – a major business related to the Turkish elite – almost did not suffer. Despite the aircraft downed by the Turks, Russia continues to sell gas to Turkey, and Turkish companies are building for the FIFA World Cup. Russia continues to buy parts for assembly plants from Turkey.

The most vulnerable and painful for the Turkish economy is the ban on the sale of travel vouchers from Russia to Turkey. Tens of thousands of Russians continue to go on holiday to Turkey, but the previous number of tourists will be hard to achieve without cheap charters.  It should be noted that after numerous acts of terrorism in Turkey, there was a fall in tourist flow from European countries, which combined with the Russian ban, weakened the tourism industry.

Turkey threatens US over bill seeking to halt weapons sales

Be the first to comment at "Gumer Isaev: I wouldn’t say that Russia can use the gas issue as a political tool"