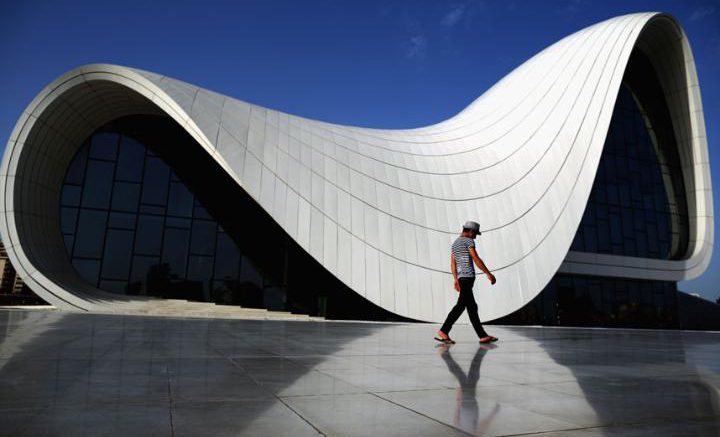 Baku, which hosts the Grand Prix of Europe this weekend, shot to prominence on the world stage for twice, and both were unlikely reasons: an oil boom in the late 19th century; and as the Eurovision host city in 2012. This eclectic post-Soviet city on the Caspian Sea, is dynamic, wealthy, and packed with intriguing oddities that will have even the most world-weary of travellers tapping their toes in glee…

Dating from the 1960s, Little Venice on the Boulevard is replete with shallow waterways, bridges and Venetian-inspired colonnades. You can, of course, take a ride in a gondola, though you’re unlikely to be serenaded with a tuneful barcarolle.

Super-spy Richard Sorge was one of the greatest intelligence officers of all time, and alerted the Soviet high command to the imminent Operation Barbarossa. His sinister memorial in Zorge Park reminds you he was in every sense a man of the shadows, its piercing eyes pursuing you into your nightmares.

Baku hosts the European Games this month, but as yet, arm wrestling hasn’t made it onto the official schedule. Athletes wishing to compete in this discipline, taken seriously in Baku’s gyms as well as in the bars, should pay a visit to the Armwrestling Federation, who manage Azerbaijan’s Professional Armwrestling League.

If you have ever wondered what it is like to bathe in a tub filled with crude oil, Baku is the place to try it. The Azeris have performed their ablutions in oil since the 6th century BC, and claim it heals everything from skin complaints to impotence. It’s a popular therapy amongst the oil-igarchs and their wives, and the carcinogens are overlooked.

5. Museum of the Dwarf Book

Wonderfully named, and promoted heavily by the Tourism Board as a site of great national importance, the museum houses an extensive collection of miniature books. They say all the classics are well-represented, but as the smallest is only 2mm x 2mm, who knows what is really inside?

Azerbaijan has more mud volcanoes than any other country on Earth, and the biggest of these has entered into the Guinness Book of Records. When a mud volcano erupts and ignites, the flames shoot up to a kilometre into the air; and the rest of the time they bubble and fart with fairly noxious gases.

This brand new building on the sea front, opened only in 2014, is in the shape of a rolled-up carpet and decorated with a very fetching floral design. Inside it’s full of carpets, as you’d expect, and you can also watch carpet weaving demonstrations.

Superbly kitsch and famous after their appearance in the 2012 Eurovision Song Contest, Baku’s Flame Towers are a trio of skyscrapers entirely covered with LEDs. The lighting pattern shifts from flickering flames to the Azeri flag and back, lighting up Baku’s night sky.

9. Hammam at the Shirvanshah Palace

The Azeris kept alive the traditions of Roman baths well into the 15th century, and this semi-ruined bath house within the UNESCO-listed palace complex is complete with hypocaust and original sections of wall tiles.

In a country where flames burst forth naturally from the ground, it should come as no surprise that fire has been worshipped since ancient times. This ancient Hindu temple in a Baku suburb was abandoned in 1883 after new oil and gas plants built nearby tapped into the same underground reserves and in doing so inadvertently extinguished the temple’s holy eternal flame.

The Washington Times: “Azerbaijan: The land of religious tolerance

A leading figure in Al-Qaeda killed in Syria

Be the first to comment at "Baku, Azerbaijan: 10 of the city’s most curious tourist attractions"