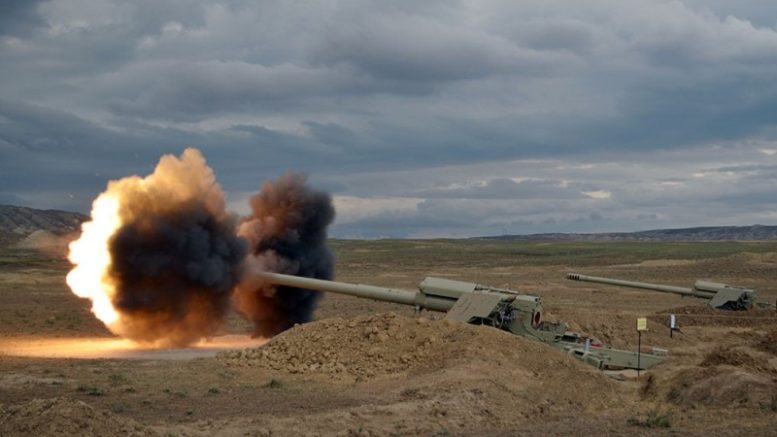 The four-day fighting, which broke out on July 12, along the state border in the Tovuz region of Azerbaijan and Armenia’s Tavush province, was the deadliest since the Four Day War in April 2016, when more than 200 on both sides were killed on the line of conflict between the Armenian-controlled Azerbaijani breakaway region of Nagorno-Karabakh.

The recent battles which are still unclear who initiated this latest round of fighting have been on the international border between the two countries, some 300 km from the Nagorno-Karabakh.

Baku blamed Yerevan for launching an assault against the frontline troops of Azerbaijan and shelling Azerbaijani villages in the Tovuz district, bordering Armenian Tavush, with mortars and howitzers [1]. Armenia, in response, accused the Azerbaijani army of a breakthrough attempt on the border [2].

In 1993, the United Nations Security Council adopted four resolutions demanding the immediate withdrawal of the occupying forces from Azerbaijani lands and the return of internally displaced Azerbaijanis to their ancestral lands. All four legally binding documents go unfulfilled by Armenia to date [3].

The war of drones

Drones have played a major role in the recent clashes between Azerbaijan and Armenia. They have been used to help the both sides target positions, document their operations, showing off video of attacks on the positions through video links from drones hovering overhead. The both countries claimed to have shot down opposition drones.

On July 21, Armenia held an exhibition devoted to pieces of drones reportedly shot down or captured from Azerbaijan during the recent conflict. Among the items were a plethora of drones, many of which were identified as Israeli [4].

However, the Israeli media claimed that it appears some of the drones at the exhibition have been used before in various displays dating back to 2016 and 2012.

Armenia has always reiterated that Israeli drones are intensively used by Azerbaijan. The Israeli-made drone ThunderB operated by Azerbaijan was presumably shot down in early April 2016 over the Nagorno-Karabakh region, according to the Flight Global website [5].

According to the Drone Databook, Azerbaijan had acquired the Orbiter 3 and the large Heron TP for surveillance by 2016. In 2018, it also procured Israel’s Hermes 900 and the SkyStriker drone which is known as a “suicide drone”. Baku has 100 SkyStrikers and 50 Harops, while it had a handful of larger surveillance drones like the Hermes 900 and 450. Azerbaijan also acquired licenses to make two types of Aeronautics drones locally through its Azad Systems [6].

In December 2016, Azerbaijani President Ilham Aliyev announced that “so far the contracts between Azerbaijani and Israeli companies with respect to purchasing defence equipment have been close to $5 billion” [7].

The video footages provided by the Azerbaijani Defence Ministry show how its country was effective in using drones to help with artillery targeting and also to publish the video as part of information warfare against Armenia to showcase Azerbaijan’s abilities [8].

Armenia has been producing drones since 2011 [9], when it showed off the basic Krunk (‘Crane’) scout drone, long since superseded the Krunk-9 and Krunk-11 [10].

In 2018 Armenia announced it was buying military drones [11] from Nagornyy-Karabakh which has an active drone industry. In May 2020, the Artsakh Defense Ministry announced it had tested a new combat drone [12] with mass production planned in the next few months, and released a video of the kamikaze drone hitting a target [13].

In the Global Firepower rankings, the Azerbaijani army ranks 64th globally among 138 militaries, while Armenia claim the 111th position. The arsenal of the Azerbaijani army includes weapons both domestically produced and purchased from foreign markets, such as Israel, Russia, Turkey, the US, China, Belarus, and others [14].

Azerbaijan is an important market for Turkish defense suppliers, and defense industry cooperation is seen by the Turkish government as a fundamental element of a larger trade framework.

Turkey’s Defense Industries Presidency Chairman Ismail Demir said on July 17 that the Turkish defense industry will always back Azerbaijan with its unmanned combat aerial vehicles, ammunition, missiles and electronic warfare systems, noting that “in addition to bringing new systems to the Azerbaijani army, we will work together on the modernization of existing systems, maintenance and training activities” [15].

Azerbaijani Defense Minister Zakir Hasanov announced in June that Baku was ready to purchase unmanned aerial vehicles from Turkey, and confirmed that the Turkish government would provide financial support for the purchase in accordance with a military financial cooperation protocol signed by Hasanov and his Turkish counterpart, Hulusi Akar on February 25, 2020 [16].

According to the deal, which was approved by Azerbaijan’s parliament on May 31, Turkey will provide around $30 million to its Caspian ally for procuring goods and services for military purposes from Turkish defense industry companies.

In 2017, Azerbaijan purchased Drone Killer system, designed to combat unmanned aerial vehicles (UAVs) from the Turkish company Harp Arge. Drone Killer can break connection between a drone and a control center, and disorient a GPS system. The system uses high-speed electromagnetic interference on a frequency of 2.4 GHz and 5.8 GHz for that [17].

Over the past five years, Turkey has become a key source market for purchases of unmanned aerial vehicles (UAV), such as Bayraktar and TAI Anka, armored vehicles and tanks such as ALTAY, artillery, missiles, and ships to Turkmenistan, Pakistan, Malaysia, Oman, Qatar, and Azerbaijan [18].

Along with purchase of armament, Azerbaijan increases the volume of local defense production every year. Some 10 countries purchase the production of twenty-eight military factories that currently operate within the Defense Industry Ministry of Azerbaijan.

According to the 2020 Azerbaijani draft budget, the defense expenses must make about 2 billion 267 million dollars, which is more from the last year’s expenses by 20.9% [19].

Azerbaijan’s military spending totaled almost $24 billion between 2009 and 2018, while Armenia spent over than $4 billion in the same period, according to the data from Stockholm International and Peace Research Institute (SIPRI) [20].

Russia has been and remained the major weapons supplier of Armenia, and Yerevan possesses a wide variety of older Soviet military equipment with recent procurement from Russia.

Russia also sells military aircraft to Armenia at domestic rather than export prices. Four multi-role Su-30SM fighter jets were delivered to an Armenia airbase in Gyumri from Russia in January, in addition Yerevan plans to buy eight more Su-30SMs in the coming years, according to Armenian Defence Minister Davit Tonoyan [21].

Besides, Armenia is interested in building cooperation with China, notably with the Norinko and Poly Group companies, and is also keen on purchasing India’s Pinaka rocket system and Sweden said to offer sale of JAS-39 Gripen fighter jets.

Meanwhile, over $645,000 (313 230 000 drams) were donated to the Armenian Military Insurance Fund from July 17 to 27. The donations were made by Armenians living in early 55 countries. In the aforementioned period most of the donations were made from Armenia, the United States, Russia, Canada, France, Germany, etc [24].

Following the recent four-day skirmishes, Azerbaijan has accused the Armenian government of conducting illicit weapons trade. Some Azerbaijani media outlets claimed that Armenia received a large batch of weapons, including mortars and shells, from Serbia via Georgia just a few days before the cross border skirmishes erupted [25].

“The Armenian military and political leadership create bogus companies, and weapons purchased at low prices are then sold to third parties… There is strong evidence that these weapons fall into the hands of terrorists. We call on the countries cooperating with Armenia to be more careful,” Hikmet Hajiyev, the head of the foreign policy affairs department within the Presidential Administration of Azerbaijan said on 21 July [26].

Rasim Ljajic, Serbian Trade Minister, confirmed that Armenia purchased weapons from a private Serbian company. “Arms were exported to Armenia in 2020 by a private company, state-owned companies had no part in that. I can’t name the company but we know that it exported mainly rifles and pistols worth less than a million euro in two shipments in May and June,” the Serbian government official said [27].

Meanwhile, Jordanian authorities denied reports the kingdom sent arms to Armenia during the border clashes. The move came one day after a statement by the Azerbaijani Foreign Ministry on the summoning of Jordanian envoy in Baku Sami Abdullah Ghosheh. The statement said the sale of weapons might have been made by private companies that bought weapons from Jordanian defense industries [28].

In his revelatory video in May, Mikayel Minasyan, Armenia’s former Ambassador to the Holy See, Sovereign Military Order of Malta and Portugal accused the Armenian government led by Prime Minister Nikol Pashinyan of taking part in a scheme to illegally sell weapons previously purchased from Russia [29].

Minasyan described David Galstyan, owns DG Arms Corporation, Armenia’s arms company, as an assistant of Pashinyan in his activities related to the “illegal” arm trafficking. The United Nations Security Council mentioned the arms company in its 2013 report on illegal supplies of military equipment to Libya during the civil war and further to Syria, to the militant groups opposing the Assad government [30].

Referring to Armenia’s purchase of Osa-AK anti-aircraft missile systems from Jordan, the former diplomat said that “in Jason authoritative [military] journal, the Kingdom of Jordan, from where our heroes purchased Osa, wrote off 51 or 52 air-system vehicles and put on sale but no one purchased them because, according to specialists, this air-system is obsolete as it was produced in early 70s or in better case in early 80s while today’s systems are more contemporary” [31].

In 2019, Russia declared David Galstyan persona non grata and banned him from entering the country through 2029. However, Earlier this month, Armenia’s prime minister accompanied by Galstyan has inaugurated an enterprise in Yerevan, which will assemble Kalashnikov AK-103 assault rifle [32].

Yerevan and Moscow signed an agreement “on friendship, cooperation and mutual assistance” in 1997, which provides for mutual assistance in case of a military threat from third countries [33]. According to an agreement on military supplies signed in 2013, Armenia purchases Russian-made military equipment at its domestic prices [34].

Speaking about the legal aspects of transit of military cargo for Armenia through Georgia, Gela Vasadze, Leading Expert of the Georgian Center for Strategic Analysis (GSAC) said that “Georgia has not imposed any sanctions against Armenia, so there are no legal grounds for banning the transit of goods, including military. In order to prohibit such transit, a relevant decision of the Government and Parliament of Georgia is required, which must be justified in terms of international law” [35].

France tries to reignite the conflict in Karabakh

Scandal erupts over the use of Russian Iskander missiles against Azerbaijan