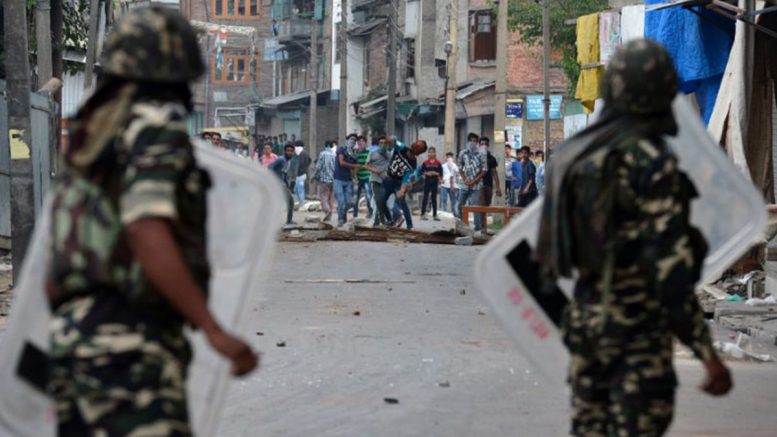 As Pakistan and India have been born, the Kashmiri conflict engulfed the thick folder of other severe conflicts in the region. Kashmir became an issue of dispute between India, Pakistan, and China, where India controls Jammu and Kashmir, makes up the southern and eastern portions of the region, totaling about 45% of Kashmir. While Pakistan controls three areas called Azad Kashmir, Gilgit and Baltistan make up the northern and western portions of the region, totaling about 35% of Kashmir. From its part, China controls one area called Aksai Chin in the northeastern part of the region, equaling 20% of Kashmir, but the real dispute is between India and Pakistan on 3,220 square miles in Kashmir to China.

Nowadays, the conflict between India and Pakistan over Kashmir has deterred and reached an extent of air raids confrontation, where Pakistani air forces shot down two Indian fighter jets over the disputed border of Kashmir, which escalated the crisis between the two nuclear neighbors.

Kashmir has been bitterly contested by both Pakistan and India following partition in 1947, leading to three wars and numerous other battles. India denied the Kashmiris right to self-determination, it forced the Maharaja of the state of Jammu and Kashmir at the time to sign the instrument of accession and thereby Kashmir annexed to the Indian domination. Since then, India used different means of oppression towards Kashmiris and suppressed their very simple demands of freedom.

The religious minorities, especially Muslims are all facing hardline Hindu groups’ dominations. These groups continued to be displaced by direct or indirect means such as industrial projects, and hate crimes, while the official government criticized human rights defenders and organizations, and increased hostile actions against them.

The government has intensified violence against Press freedom and free speech in the academic campuses. India, somehow, had a failure in committing to human rights’ legislation of the UN Human Rights Council. Despite the UN several progressive judgments, some official provisions undermined the human rights protection there.

Repeatedly, Amnesty International and Greenpeace have condemned the Indian government of the smear campaign that it launched against the human rights’ defenders and NGOs who criticized the government’s aggressive actions. It is worth mentioning that Amnesty India has always been on a crackdown by the government, where it cut off its [AI] bank accounts and caused the dismissal of about 75 employees, knowing that most of its senior leaders working as volunteers, as Greenpeace India also suffered from severe official investigation.

Ambassador of Peace and CEO of Institute of Peace and Development (INSPAD), Muhammad Tahir Tabassum stated, “Kashmir conflict world recognized by UN resumptions since 1947. UN has given the right to self-determination to Kashmiris, but India does not accept these resolutions, while the Indian Army killing innocent people, youths, and women.”

“Pakistan and India fight three wars, and now both countries have nuclear powers. India is escalating the tension on the borders and if any war in both countries then half of the world population with no more on earth because this war will be a dangerous nuclear war and no any power can stop it,” Amb. Tabassum added.

Is there any political solution?

Among expectations of a potential war, the global efforts for de-escalation have shadowed the India-Pakistan atmosphere according to the latest crisis, and many parties had asserted on a political solution between the two countries, while human rights insisted to putting peace in Kashmir region on the ground.

The solution could be through transforming the Line of Control into a permanent border. Or, India and Pakistan can give up their control of the valley and make it as a quasi-independent nation with UN control and a ruling elite by-election. India and Pakistan are capable of giving half of the law enforcement agents to ensure security. Even if India and Pakistan would lose some territory, but it would be more acceptable for all parties.

All in all, the Kashmiri people are suffering while we are just writing and condemning, despite that all parties can achieve peaceful procedures to end the crisis. Kashmiris are only asking for step aside from any potential of war that could lead the region to an endless wasting of blood and innocent victims, and proceed with peace talks and dialogue.

Tabassum of INSPAD continued that Pakistan wants peaceful dialogue solution with India, but Indian mad leadership have no sense to reply positive, and they are killings Kashmiris, raping women, blinding and paralysis youth in Kashmir

As Amb. Tabassum also mentioned that war is no solution only dialogue!

Hamza bin Laden announces revenge against the U.S. for the murder of his father, Osama bin Laden

Be the first to comment at "A Gesture on the Kashmir Conflict: Is Anybody Listening?"