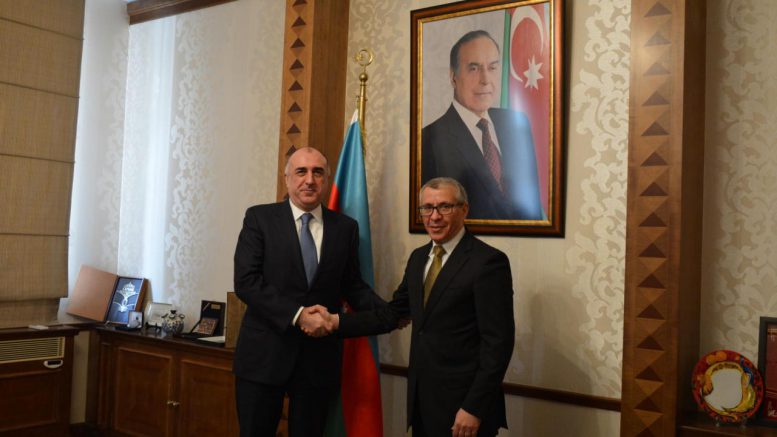 Azerbaijan’s Foreign Minister Elmar Mammadyarov has received the ambassador of the Kingdom of Saudi Arabia to Azerbaijan, Moussaid bin Ibrahim al-Sulayman, upon termination of his diplomatic tenure in Azerbaijan, the Azerbaijani Foreign Ministry said in a message on April 12.

At the meeting the sides underlined that the political relations between Azerbaijan and the Kingdom of Saudi Arabia are at an excellent level and are pleased with the development of the economic, trade and tourism cooperation.

It was noted that more than 35,000 Saudi Arabian citizens visited the country last year and this indicator will increase further this year by signing an air link agreement and direct air flights.

Mammadyarov highly appreciated Saudi Arabia’s consistent position with regard to Armenia’s aggression and occupation of the Azerbaijan’s territories, as well as support for Azerbaijan’s fair and just position in the international organizations.

The minister emphasized that the humanitarian aid provided by the Kingdom of Saudi Arabia to the refugees and internally displaced persons as a result of Armenia’s aggression against Azerbaijan in difficult times in the early 1990s has never been forgotten.

The envoy expressed his gratitude for the support to the development of cooperation between the two countries during his tenure, noting that Saudi Arabia’s stance on the Armenia-Azerbaijan, Nagorno-Karabakh conflict will consistently continue.

Mammadyarov highly appreciated the efforts of the ambassador made for the development of traditional friendly and partnership relations between the two countries and wished every success in his future endeavors.