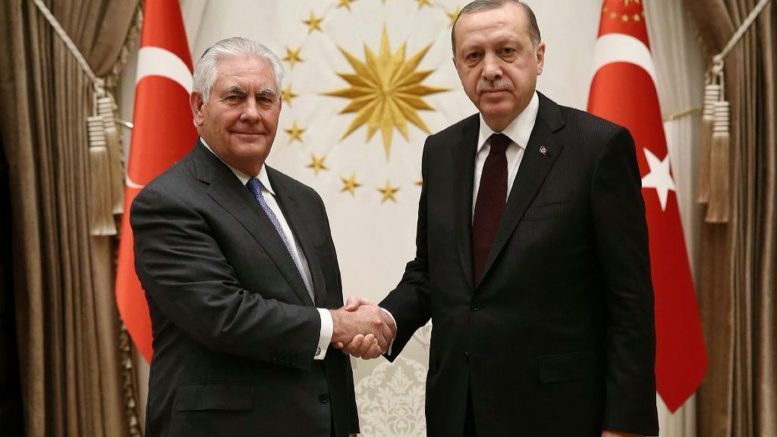 Secretary of State Rex Tillerson met with Turkish President Recep Tayyip Erdogan for more than three hours Thursday in what both sides predicted would be two days of difficult talks after months of badly fraying relations between Washington and its NATO ally in Ankara.

An unsmiling Erdogan received Tillerson at the presidential palace. After their meeting, Tillerson would only tell reporters, “We’re still working.”

The diplomatic push came a day after Secretary of Defense James N. Mattis held a tense meeting with his Turkish counterpart on the sidelines of a North Atlantic Treaty Organization meeting in Brussels.

Turkey, which hosts a major U.S. air base, has demanded that the Trump administration stop arming and training a Kurdish militia in northern Syria. Ankara argues the U.S.-backed Kurds share personnel and ideology with the Kurdistan Workers Party, or PKK, a terrorist group that has waged a deadly insurgency inside Turkey.

Washington, which sees the Kurdish fighters as crucial to defeating Islamic State, has refused.

Turkey launched a military offensive last month against Afrin, a Kurdish-held enclave in northwestern Syria, and has threatened to push about 60 miles east to Manbij, where U.S. troops are deployed with Kurdish forces.

Ankara has urged Washington to move its forces out of the way, but the Trump administration has said it has no plans to withdraw.

U.S. officials fear the dispute with Turkey will distract from efforts to defeat Islamic State. The militants have been pushed into a sliver of land near the Iraqi border, but still pose a terrorist threat.

“There is no question that the situation in Afrin has taken the focus” away from Islamic State, said Col. Ryan Dillon, the Baghdad-based spokesman for the U.S.-led military coalition in Iraq and Syria.

He said the battle in Afrin has drawn not only Kurdish fighters from elsewhere in Syria, but also Arab and Christian fighters who want to help them.

U.S. officials say that Washington recognizes Turkey’s legitimate security concerns about Kurdish militants but that Ankara must show restraint in the volatile region.

“We are urging them to show restraint in their operations in Afrin and to show restraint further along the line across the border in northern Syria,” said a senior State Department official who briefed reporters on condition of anonymity.

Turkey also is angry at U.S. criticism of the jailing of tens of thousands of people after a failed military coup in 2016, and Washington’s refusal to extradite a Turkish cleric in Pennsylvania who Ankara blames for the coup.

The Trump administration complains in turn of attacks on protesters by Erdogan’s guards when he visited Washington last year, and the arrests of civilian employees at U.S. diplomatic facilities in Turkey.

The rupture in relations is so severe that the two nominal allies stopped issuing visas to each other’s citizens for months last year.

Before Tillerson arrived, Erdogan railed against the United States in a speech to the Turkish parliament in Ankara. He threatened to give Washington an “Ottoman slap” and suggested he might withdraw from NATO.

“We declare that we will destroy every terrorist we have seen starting from the ones standing with [the U.S.] side,” Erdogan said. “Then they will understand that it is better for them not to stand with the terrorists which they rub their backs on.”

Turkey has threatened to purchase Russian military equipment, including air-defense missiles and radar, that might not be compatible with NATO systems, or could give Moscow access to NATO intelligence.

The disparity appeared to reflect the chill in relations, although Turkish officials said they still hope Washington will take notice of their concerns.

“Bilateral relations can still be rescued,” the pro-government Daily Sabah paper wrote in an editorial addressed to Tillerson. “However, as things stand, Turkey will not lift a finger to please you. It is about time you thought carefully and did something that made Ankara happy.”

Turkey says siege of Syrian city of Afrin has begun

Turkey’s march on Manbij stalled by wall of reality