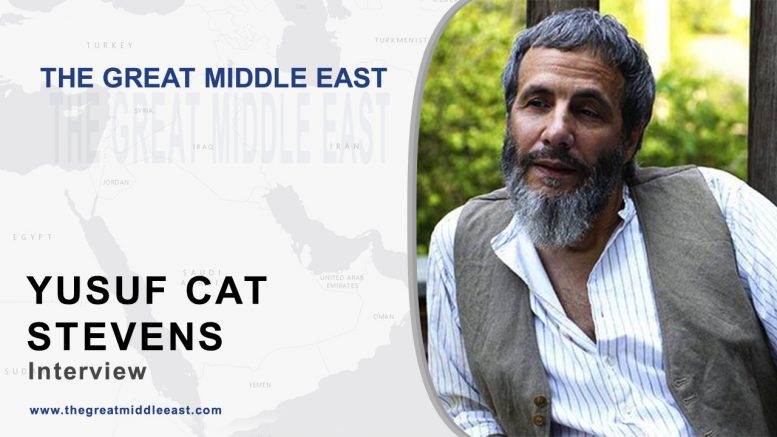 Famous British singer and songwriter Yusuf Cat Stevens gave an interview to the Great MiddleEast’s correspondent in Turkey Ismail Okan Ukav ( @iokanu ). Stevens expressed his opinion about the coup attempt and Islamic world’s problems during his trip in Istanbul.

Stevens draw attention to problems in Muslim World and said there must be a self-critical approach against negative developments;

“War has taken a different disguise. Today there is a third world war going on, they call it the ‘War on Terror’. Yet, it is really the same fire of ignorance and anger which spreads because of the inability of the Muslim world to be left in peace.” said Stevens.

“Also, we must be self-critical; If some Muslims believe that they can change the world and make Islam great again by blowing themselves up and taking innocent people with them, not even giving them a chance to hear the wonderfully liberating message of God and His Prophet, they have surely strayed far, far away. There is no room for collateral damage in an honourable and just war.”, he added.

“Chaos and anarchy are the worst enemies of human society”

“July 15 coup attempt was an attempt to destabilise Turkey and go back to the days of darkness and conflict. I believe in peace and stability. Democracy, like anything man-made, is an imperfect system, but it can bring stability and peace. It is designed to allow for political disagreement, but then solves it by granting victory through the ballot box to the one chosen by the majority. It’s simple but effective and avoids conflict. Chaos and anarchy are the worst enemies of human society, that was the understanding of Pythagoras, and it is still a very valid opinion.”

He reacted to criticism against Turkish government and draws attention to Turkey’s development;

“Leadership is a dangerous and heavy responsibility and I believe God helps those who help people and bring stability. It is a difficult job to unite people in a democracy, just look at what’s happening in the Western political spheres. No man is perfect unless he is a Prophet or Angel, and there will be no more prophets after the last, Muhammad. So we have to support the policy which brings the greatest good to the most.”

“The changes which have happened in Turkey over the last 20 years have been massive. I remember the broken roads and litter filled streets and lack of civic care in cities like Istanbul. It has improved miraculously and the general economy has risen. I think there may be some jealousy in the minds of some other countries in the progress made by Turkey, I wish that it would stay strong and united to face the future with courage and guidance, considering its position and history.”, Stevens added.

“Turkey, being once the seat of the Islamic Caliphate for 600 years, has historically been a global protectorate for many nations. It is part of the character of Turkish people to play a central role. Since I embraced Islam there have been many changes. My first visit to Turkey was an eye-opener to see how Muslims evolved and expressed themselves as an independent Muslim country. The music of Turkey also moved me greatly, the tones and sentiments within the music struck my heart.”, he said.

According to study Islam is the world’s fastest-growing religion

Be the first to comment at "Yusuf Cat Stevens: Turkish sentiments struck my heart"