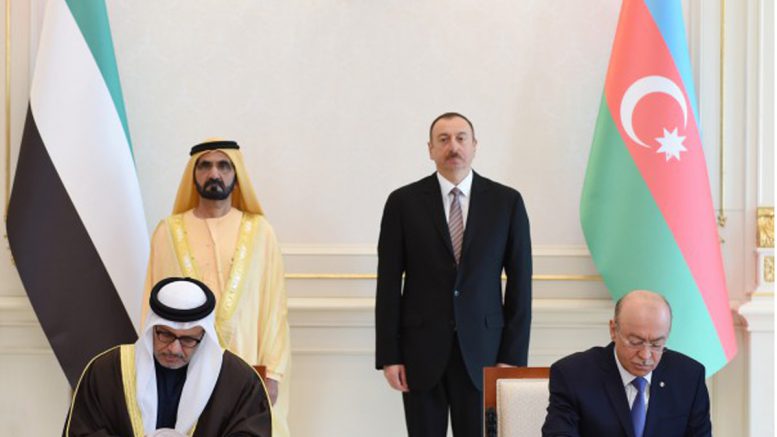 The Minister highlighted his recent Baku visit: “It is with great pleasure that I again had the opportunity to visit the Republic of Azerbaijan last week. The discussions held with President His Excellency Ilham Aliyev, First Vice-President Mehriban Aliyeva, Foreign Minister Elmar Mammadyarov were both positive and highly constructive. In the same time, It was my great pleasure to attend the closing ceremony of the Baku 2017 Islamic Solidarity Games on 22nd of May as a guest of honour.”

“Since my last visit in 2012, both the United Arab Emirates and Azerbaijan have continued to develop our ties on all levels, illustrating the close bond of friendship that exists between our two fraternal countries,” he added.

The Minister said the United Arab Emirates considers Azerbaijan to be one of its foremost regional partners. “The UAE was among the first countries to recognize the independence of Azerbaijan in 1991 and has continuously sought to strengthen and expand its ties with the Azerbaijani Government and its people.”

“These links, underpinned by substantial political, trade, economic, and social bonds ensures that our bilateral relationship will continue to only grow and prosper into the future. The great confidence the UAE has in its relations with Azerbaijan is symbolized by the over USD 800 million UAE public and private sector companies have invested in the Azerbaijani economy, and the fact that in 2016 alone, non-oil trade between our two countries reached closed USD 300 million, with the potential for additional expansion.”

The minister said the UAE aspires to continue to expand its cooperation with Azerbaijan in a range of economic and investment fields, including infrastructure development, the energy sector, medical services, and tourism; “Azerbaijan’s dynamism and ambition is greatly admired by the UAE, which has undertaken its own rapid economic and political development over recent years.

While economic relations have formed a critical foundation for UAE-Azerbaijan ties, this is only one part of what is a rich and multi-layered relationship. From education to culture, to the deep and close interchange that occurs on a daily basis between our two peoples, it is clear that the UAE and Azerbaijan share common bonds and common perspectives.”

“During this visit I believe our two countries made great strides in furthering our bilateral relationship in the political, security and economic fields, with significant scope for us to work closely together to overcome a range of significant regional and global challenges, particularly the threat of terrorism, and promoting peace and prosperity both regionally and globally and enhancing the internationally recognized sovereign borders of the countries.

Under the great leadership of President His Excellency Ilham Aliyev and Vice President Her Excellency Mehriban Aliyeva, I consider that bilateral relations between Azerbaijan and the UAE have a bright future,” he concluded.