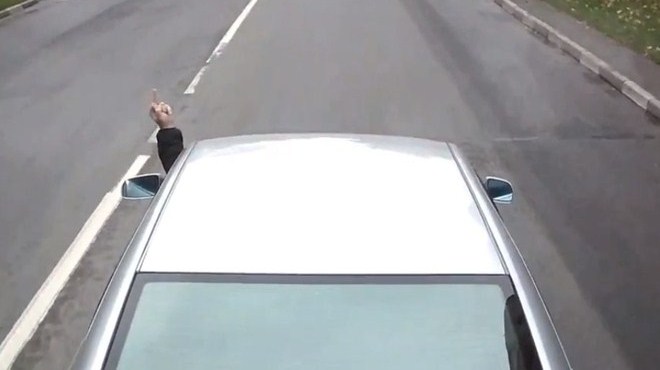 A woman has been accused of endangering the life of another woman driver, assaulting and flashing the middle finger in a road rage incident at Palm Jumeirah, a court heard on Tuesday.

The American woman was driving back to her residence when the 47-year-old Russian woman overtook her in a reckless manner and she was jumping lanes inattentively in May 2016.

The Russian woman was believed to have jumped several lanes in a reckless manner before the American used the horn to warn the Russian to drive more cautiously at 9pm, according to records.

The 47-year-old then swerved her car in front of the American’s vehicle and pulled over, forcing the latter to stop in the middle of the road.

The Russian then jumped out of her car, assaulted her and flashed her middle finger in her face. Meanwhile, another passenger, who was sitting beside the Russian, came out of the vehicle, approached the American and asked her to forgive her friend for her rowdy behaviour because she was drunk.

Police were summoned to the site after the American complained and the 47-year-old was apprehended and taken in for questioning.

Prosecutors accused the Russian woman of risking the life of the American, assaulting her and indecently gesturing in public.

The 47-year-old was also accused of impersonating her friend during the police investigation and using someone else’s driving licence.

The Russian failed to appear before the Dubai Court of First Instance where she was scheduled to enter her plea on Tuesday.

Presiding judge Mohammad Jamal will hand out a judgement in absentia against the suspect.

The American testified to prosecutors that the incident happened while the accused repeatedly jumped lanes in a dangerous way.

“After I honked, she repeatedly and provocatively slammed the brakes in front of me … then she blocked my way and forced me to bring my vehicle to a complete halt. Then she stepped out of her vehicle and came straight to me … she assaulted me and flashed her finger indecently. A woman who was accompanying the suspect came and pulled her back … then she apologised on the suspect’s behalf and told me she was drunk,” she claimed to prosecutors.

The Russian suspect was cited as telling prosecutors that she got into a fit of road rage with the American and admitted that she used her friend’s driving licence because she had previous records with the police.

Be the first to comment at "Dubai: Woman accused of flashing middle finger while driving"