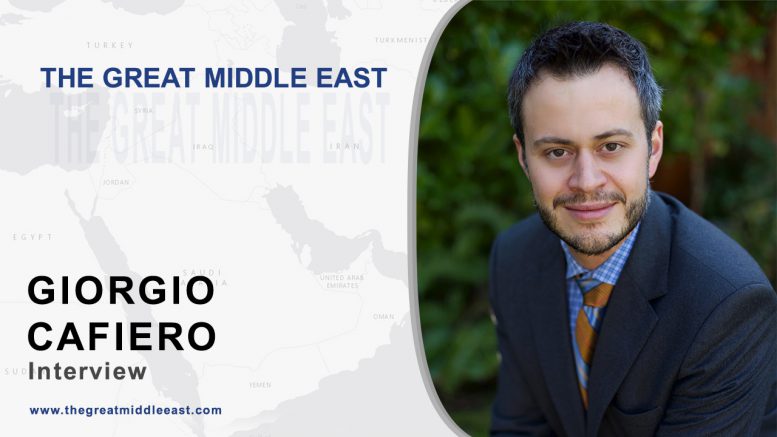 We present you an interview with the head of the Gulf State Analytics (Washington D.C.) Giorgio Cafiero.

The Gulf region has been an area of interest of the USA for many years, however, during the final years of Barack Obama’s presidency, Washington has shown an increasing trend in loss of interest in the region. In your opinion, how will the administration of Donald Trump frame its policy towards the region?

The Trump administration is determined to take a more hardline stance against Iran. Most leaders in the Gulf Cooperation Council (GCC) states share Trump’s belief that the Obama administration failed to take decisive action to contain Tehran’s regional conduct. In the GCC there is cautious optimism that Trump will demonstrate a greater commitment to protecting the Arab Gulf sheikdoms from Iran’s ascendancy, which many in the GCC believe represents the number one threat to their collective security. National Security Advisor Michael Flynn’s warning to Iran, in which he put the country’s leadership “on notice” earlier this month, and the Trump administration’s framing of Yemen’s Houthi rebel movement as an Iranian terror proxy sit well with officials in Riyadh, Abu Dhabi, and other Arab Gulf capitals.

Nonetheless, the Syrian Civil War is an issue where some in the GCC are unsettled by the Trump administration’s rhetoric. Having called for severing support for rebel groups seeking to topple Bashar al-Assad’s regime in Damascus and having advocated closer Washington-Moscow cooperation in the struggle against Daesh, the Saudis and Qataris have concerns about the Trump administration’s approach to Syria empowering Russia and (by extension) Iran in the Levant at the GCC’s expense. Although Saudi Arabia’s King Salman has voiced his support for Trump’s call for “safe zones” in Syria, it remains to be seen how these words will translate into actions that change realities on the ground in the war-torn country.

Besides the USA, a number of countries are trying to play a more active role in the Gulf Region which hasn’t really been interested in the region before. These countries are France, China, Turkey and to some extent Russia. Will any of these countries fully be able to substitute the USA for the monarchies of the Gulf?

Since the GCC’s establishment in 1981, the six Arab Gulf monarchies have remained dependent on the US as a defense guarantor. No other power has, thus far, proven capable of fulfilling this role or even expressed any interest in attempting to do so. Nonetheless, as GCC officials have had growing concerns about their dependency on Washington the Arab Gulf states have reached out to other states to diversify their web of alliances. Ultimately, this hedging of their bets is about gaining greater leverage vis-à-vis the US, not fundamentally altering their relationship with Washington. For example, Qatar and Turkey’s growing defense cooperation, underscored by the Turkish military’s presence in the emirate, fits into Doha’s grander strategy of maintaining strong relations with numerous powers that have capable and experienced militaries. Nonetheless, the Turkish base in Qatar is no substitute for US CENTCOM, which ultimately guarantees the Arab Gulf country’s defense from any external threat.

There has been two main antagonists in the region since the fall of Saddam Hussein, they are Iran and the Kingdom of Saudi Arabia. The situation is quite tense. Both countries have quite a long time been involved in proxy wars (Iraq, Syria, Lebanon, Yemen). Do you think the cold war between Saudi Arabia and Iran could escalate into a full-scale war in the region?

There is always a risk of a full-blown all-out war between Saudi Arabia and Iran. However, given that both Riyadh and Tehran would have so much to lose from such a scenario, it appears more likely that these two Gulf powers would continue challenging the other via proxy rather than through a direct military confrontation. From the Saudi vantagepoint, any move to initiate such a war would be highly irrational. Iran has a stronger, larger and more experienced military force, which would essentially guarantee an Iranian victory if Saudi Arabia were to fight Iran independently in any all-out war. Saudi Arabia has never fought a war independently, having always relied on the world’s superpower, the US, and Arab allies when its military has engaged in combat outside of Saudi territory. Iran, however, was isolated in the Iran-Iraq War (1980-1988), which forced the Iranians to become a self-sufficient military force capable of mastering the art of asymmetrical warfare to its advantage.

The processes arising in the Gulf Region is very important for the world, and sometimes remain incomprehensible for the general public. In this regard, people rely on the institutions, the media and institutions that study and analyze the region. One such organization is Gulf State Analytics headed by you. Do you face any difficulties in your daily activities, and what are your future plans related to the development and activities of Gulf State Analytics.

The Gulf region has a complicated geopolitical landscape. Naturally, it is difficult to analyze the variables which create risks and opportunities for stakeholders. At Gulf State Analytics, we pride ourselves in working closely with many sources on the ground in the GCC countries and greater Middle East. Many Washington/London/Brussels-based organizations in this field attempt to analyze the region from afar, relying solely on mainstream media outlets in the West for information. To stay ahead of the curve it is important to visit the region frequently and maintain networks with government officials, diplomats, journalists, analysts, and businessmen in the region who have special insight into local affairs.

Iran’s defense minister: ‘Zionist regime’ will be destroyed, if war imposed on Iran

The Trump immigration ban and business

Trump says that Israeli settlements may not be helpful -Video

US President promises to make ‘safe zones’ in Syria

Be the first to comment at "Giorgio Cafiero: In the GCC there is cautious optimism that Trump will demonstrate a greater commitment to protecting the Arab Gulf sheikdoms"