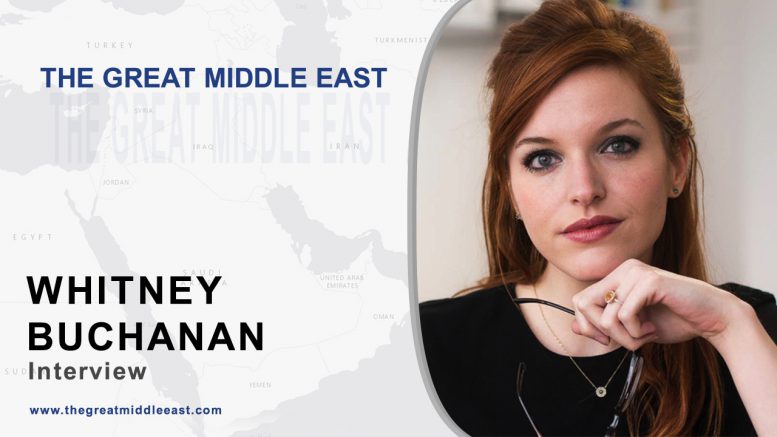 One of those people is Whitney Buchanan, Analyst and Commentator on Gender Issues and MENA Affairs. Founder www.middleeastcollective.com.
Here is our interview with Ms. Buchanan.

So, the first question is: Let us conditionally divide your life into two periods. The first period, let’s call it American and the second one – Middle Eastern. During the American period, when you were living in the US, what did you know about Islam and the Middle East? On which basis was your opinion about this religion and this region formed?

I will admit that I didn’t know very much about Islam or Middle Eastern culture until high school, when I took it upon myself to start studying outside of the classroom about the Abrahamic traditions. I did this mainly because one my best friends was Jewish, and I wanted to know more about his family’s traditions and religious practices, and because in-depth analysis of non-Christian religions was (and still is) a rather touchy subject throughout the Bible Belt. However, I began intensively studying Islam and the Middle East at the University of Tennessee. I became hooked almost instantly when I took my first religious studies course, which is why I decided to become a scholar of religion.
During that time the majority of my best friends were Muslim women, whose families were originally from Kurdistan, Iran, Pakistan, and Egypt. They were always very open-minded and genuine whenever I would ask them what seemed like millions of questions concerning their homelands, their cuisine, the way they prayed, their superstitions, the beautiful garb they would wear for Muslim holidays, their relationship with God, and what they loved most about living in America instead of the Middle East and North Africa (MENA).
I became very defensive of these women whenever Islamophobia began rising in East Tennessee. In 2010 a mosque near the university was vandalized and anti-Islam signs began to pop up along the roads. Videos were made in Knoxville of men urinating on the Qur’an, as they stuffed it with bacon and lit it on fire, while shouting intolerant profanities no “Christian” should ever speak. I remember my Iranian-American friend, Nazley, watching that video in the library as we studied for our mid-term exams. When the tears started rolling down her cheeks, I couldn’t remain silent on campus any longer; so I organized public discussions, rallies, and other events. I suppose it was in that painful moment I became an activist and advocate of promoting religious tolerance and understanding of the MENA region.

You studied in Cairo, during the rule of Mubarak, Morsi and Field Marshal el-Sisi. Looking back at 2011, what has changed in Egypt, in your opinion? Is that change for better or worse?

The first time I visited Egypt was in 2010 while I was doing research and I can definitely say that the country has undergone very difficult changes since then. I have spoken with many friends in Egypt and experts that say the country is suffering worse economically now than it has been since the ousting of Mubarak. Hyperinflation looms and today $1.00USD is equivalent to 15.50LE, which is absolutely shocking as I’ve never seen the Egyptian Pound drop so sharply in 8 years. Though Egyptians and expats alike have been struggling to find sugar throughout October and November, I don’t think the “bread, freedom, social justice” chants will emerge (anytime soon).

On the other hand, policies regarding gender equality are generally better now than in the time of Morsi. From my previous master’s research, I determined that women’s empowerment programs and the general wellbeing of women was affected much more negatively under the Morsi regime than the Mubarak government, due to stringent decrees and a forced drop in female political representation.

I don’t want to stir the pot, as I love Egypt and intend on returning in 2017 for research, but I do hope the current government will loosen up the reigns in regards to allowing students, journalists, and activists to speak and write freely without fear of being penalized in any way.

Today, many people have the technical and financial ability to create a website. Through a website one can promote certain ideas, try to change or improve people’s minds.  But that’s not what many people do. And you did that. Tell us about the mission of your website, about your further development plans.

Ultimately, I wanted to create a sacred space where people can come to learn, grow, respectfully share ideas and build dialogues on how to make our diverse communities more tolerant of one another.

Middle East Collective is a social initiative, which promotes the understanding of the MENA region and tolerance of Islam, while embracing Muslim communities in the West. MEC works to build bridges between Muslims and Non-Muslims, through collecting submissions. These contributions can come in the form of photo essays, videos, graphic design, art, poetry, spoken word, documentaries, scholarly articles, personal narratives; and other forms of relatable self-expression the contributor wishes to portray.

I’m in the process of collaborating with hugely talented MENA and Arab-American artists who are preparing MEC-specific images, which will be featured on select products next year. I am also partnering with Lucie Goulet, founder of Women in Foreign Policy, for an incredibly exciting partnership that will begin in January 2017. Please check our websites early in January for more information!

For a long time, the United States played an important role in the Middle East. Some experts believe that this role was ambiguous. Now, when there is the new president in Washington, Donald Trump, what do you think will be the Middle Eastern policy of the US?

At this point in time, it’s difficult to say what Donald Trump’s exact plans are for U.S.-MENA relations, as he did not heavily focus on this important topic throughout the presidential elections campaigns. This is a very critical moment and I hope he respects the international treaties and laws which are currently in place between the U.S. and MENA countries.

As Secretary of State, Hillary Clinton had good track records of negotiations and implementing successful peace talks in the region. Her strategies should be thoroughly examine and considered, regardless of the fact that she was “rivals” with Trump throughout the presidential election process. Trump and his advisors should be calling in legitimate MENA experts and analysts, who can help our government determine what worked well in recent years and what we can be improve; especially due to matters concerning ISIL, recently rejected peace talk proposals led by John Kerry, and the Syrian refugee crisis growing all the more complex.

Egypt’s Sisi was supposedly the first person who called Trump to congratulate him, which many other scholars and experts have mixed feelings about. Our Middle East agenda should not be one which implements Muslim bans and Muslim registries, as those proposals will only make our relationships with most MENA countries more strained. Furthermore, we cannot adopt policies which focus solely on the usage of drones, targeted killing, outdated military manuscripts, and boots on the ground; We must work on improving diplomatic strategies comprised of peace talks, negotiations, and traditional non-Western processes of reconciliation found throughout the MENA region.

UK: 4 yo Muslim girl banned from wearing hijab in school

Be the first to comment at "Whitney Buchanan: Middle East Collective is a social initiative, which promotes the understanding of the MENA region"