When we look back at history, the things that “went wrong” can seem obvious – from war to political uncertainty and economic crisis.

So what will we say about Syria?

Nowadays, we get taught in history class that the assassination of Archduke Franz Ferdinand was one of the triggers for the First World War.

And that Hitler’s rise to power had a variety of factors, including the economic situation in Germany, as well as his abilities as a public speaker.

These are some of the essay questions we think students in 50 years from now may be asked. Newsbeat has got some experts to make their best predictions, as to what answers might be expected.

You can also explore this story in a different way. Newsbeat Explains is a new way of experiencing news piece by piece – click here to try it with this story.

Begin at the beginning – when did this start?

“If I were teaching, I would go back to March 2003 when Britain and America and other countries decided to invade Iraq,” says Prof Tim Jacoby, who specialises in conflict studies at the University of Manchester.

“But you could equally create an argument to say in order to understand what happened in Syria, you need to understand Saddam Hussein’s decision to invade Kuwait in 1991. Or you could go back further.” 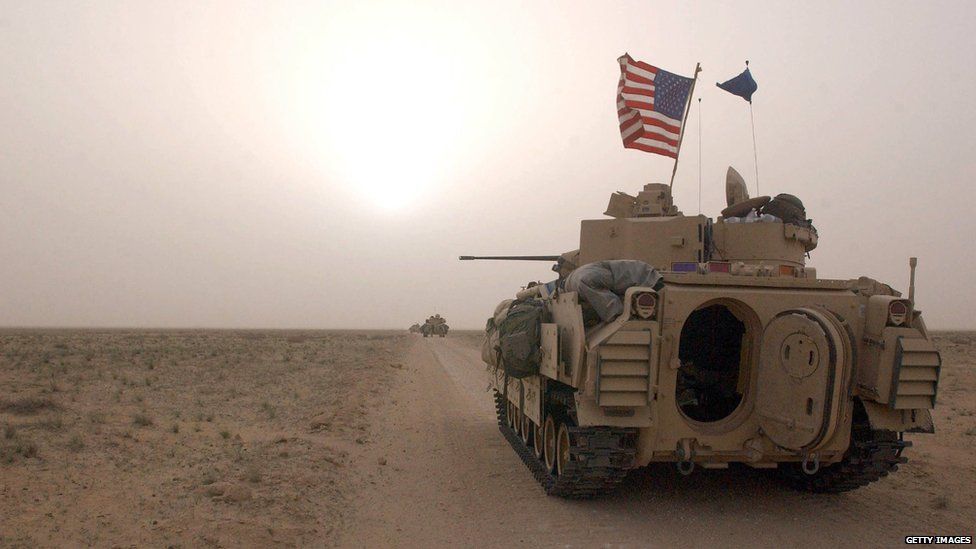 Michael Stephens, a Middle East research fellow at the Royal United Services Institute, a security think tank, agrees that 2003 is a “good start” but other dates are also key.

“People in Syria up until 2001 only had two television stations, which were controlled by the state,” he explains.

Once people there had internet access, they could better communicate with the wider world and people were spurred on to “want more” for themselves.

“The economic crash of 2007/08 had a huge economic impact on the Arab world which led to the Arab Spring.”

Who was fighting with whom?

Both Michael and Tim agree, this is likely to be seen as one of, if not the, most “complex” conflicts in decades. 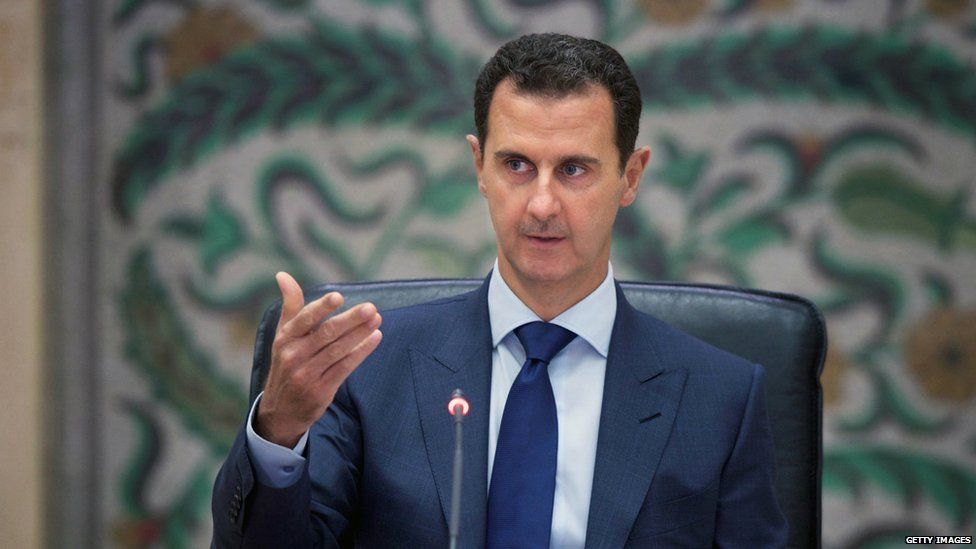 Some of the key groups within the Syria conflict include:

Estimates suggest that there could have been as many as 1,000 different groups opposing the government since the conflict began, with 100,000 fighters.

Who were the big players on the international scene?

This is another issue of “great complexity” according to Tim. [You might be noticing a theme by now.] Here’s what he says about some of the more influential powers: 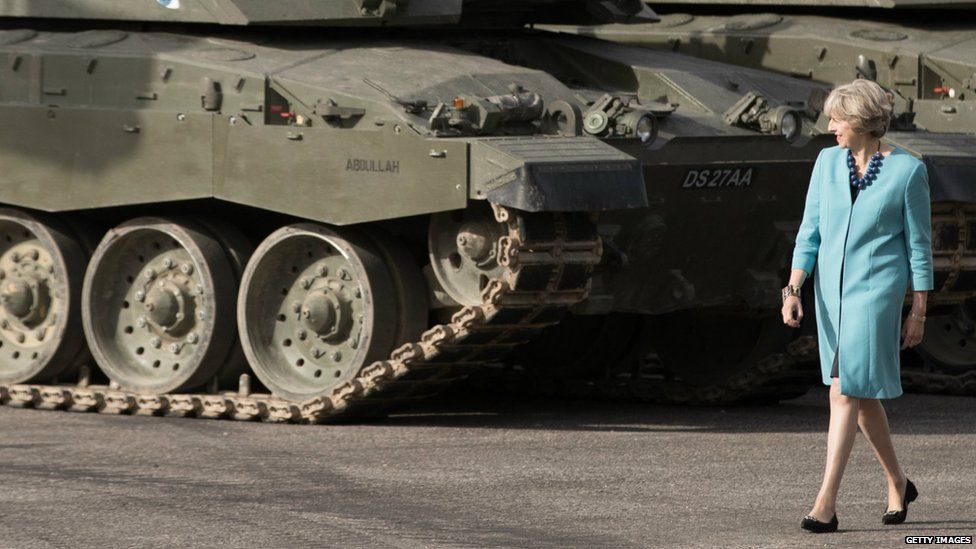 Wondering where Great Britain is in all of this? Tim describes them as “bit players”.

“We like to talk up our game – just like the England football team – but ultimately we’re rubbish,” he adds.

Why was Iraq so important to the conflict in Syria?

“The Iraq invasion is the first time for a long time that we invaded a sovereign country and subjected to a prolonged period of occupation,” says Tim.

“It destabilised a lot of the tyrannical, despotic regimes that have existed in the region for decades.

“Syria is a direct result of that destabilisation, I would argue.” 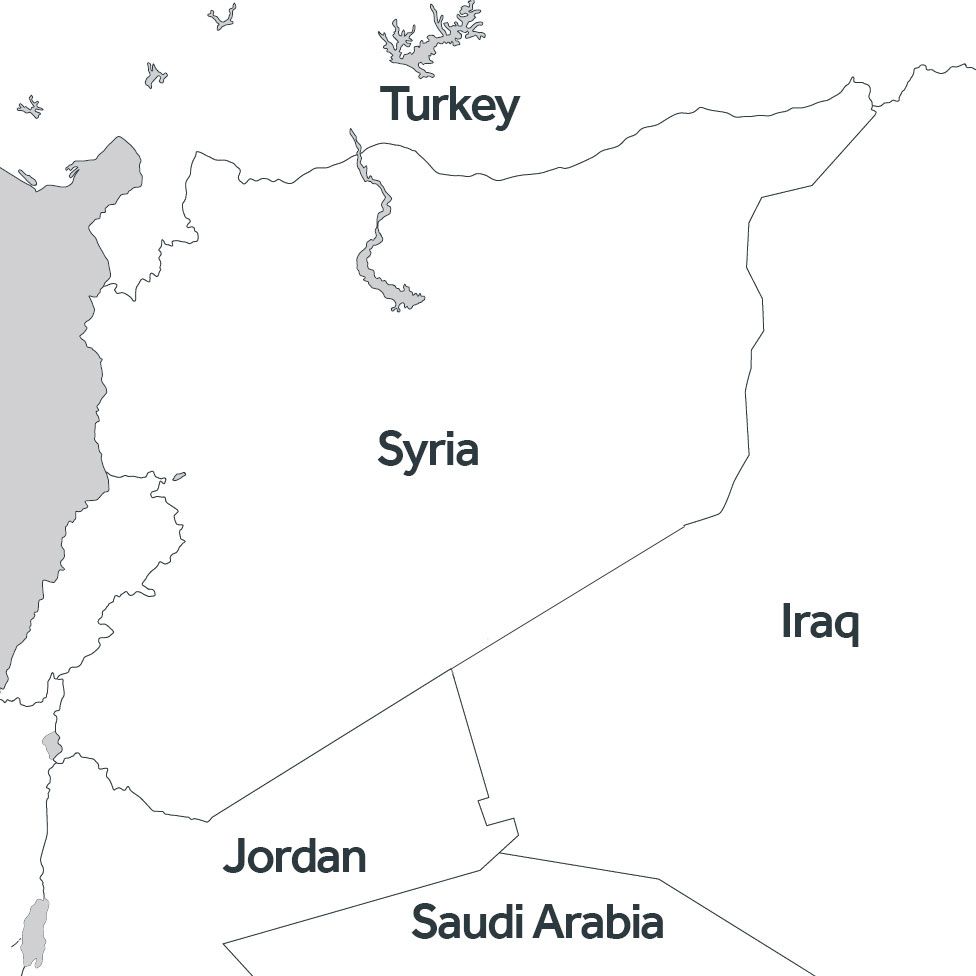 Not everyone thinks of Iraq and Syria as two separate nations either.

“That border that we drew on the map between those people, has never been accepted in the minds of those people,” says Tim.

“The people that live in the desert that straddles that border see themselves as the same people.

“So what Daesh, Islamic State is really all about in lots of ways is dissolving that boundary – and that’s exactly what they’ve done.”

What impact did the conflict in Syria have on the civilian population?

“The Iraq body count is just an estimation,” says Tim.

“Compared to Vietnam where bodies were counted and casualties were published, there’s very little data.” 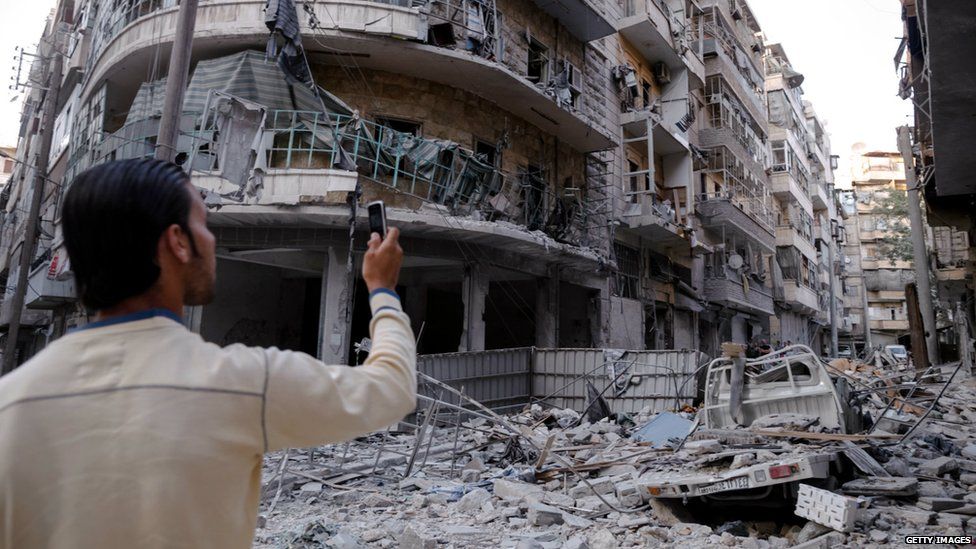 He says this was a “deliberate policy” on the part of coalition governments such as the US, which has continued into the current conflict.

One result, Tim says, is the anti-war movement didn’t have these figures to aid their cause.

We do know that millions of people have left Syria in the last few years as refugees.

How did the rest of the world view the conflict?

Social media and the internet has played a part in not only allowing people inside Syria to better experience the wider world, but has also given them a platform to broadcast what’s going on in their lives. 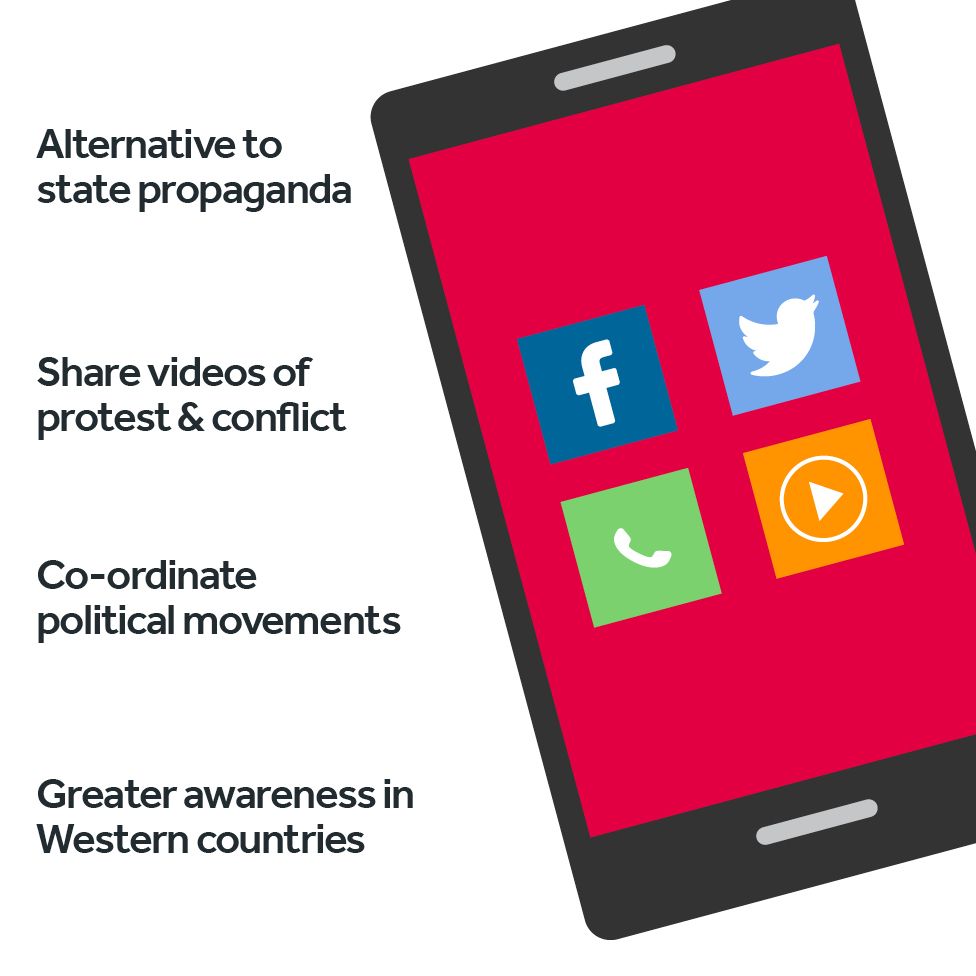 “From a Middle East perspective, I think the outpouring of debate on social media has been quite polarising,” says Michael.

“It’s a bit like when Alan Kurdi [the three-year-old boy in the now iconic photograph] washed up on the beach.

“Does it really take a child to be washed up on the beach for people to care?”

“Perhaps the [Syrian] refugee crisis has caused us to think a bit more critically about our role in the rest of the world,” says Tim. 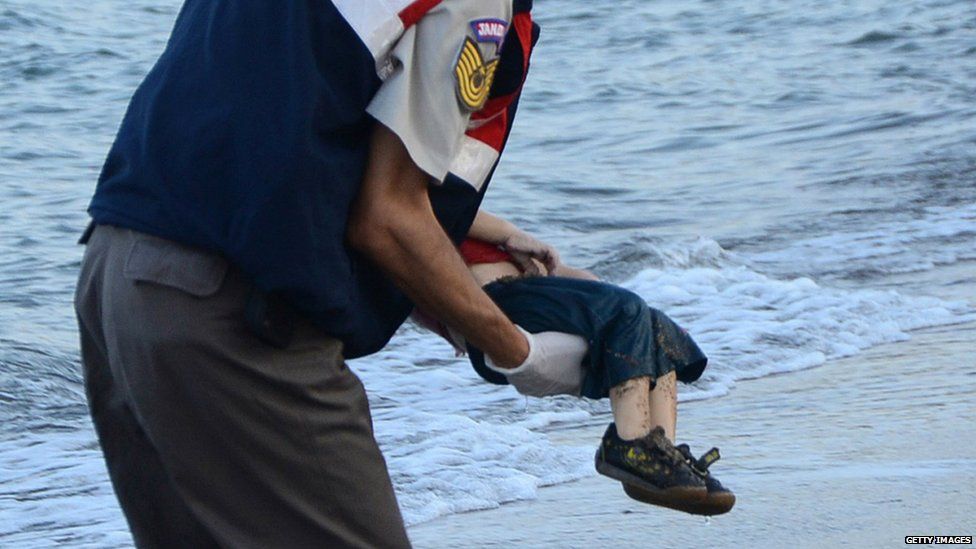 He points out the numbers of Syrian refugees living in different countries varies wildly.

“Turkey for example has probably three million Syrian refugees,” he says, compared to the few thousand who have come to Britain.

“After suffering all that hardship and deprivation, that they then should be subject to our [Britain’s] endemic racism… It’s absolutely unforgivable.”

How is the conflict remembered and what can we learn from it?

Michael believes this will be the “defining conflict” up to the middle of this century, adding: “It may well be as important as World War One was.”

Both he and Tim think people in the future will damn the handling of the Syrian conflict. 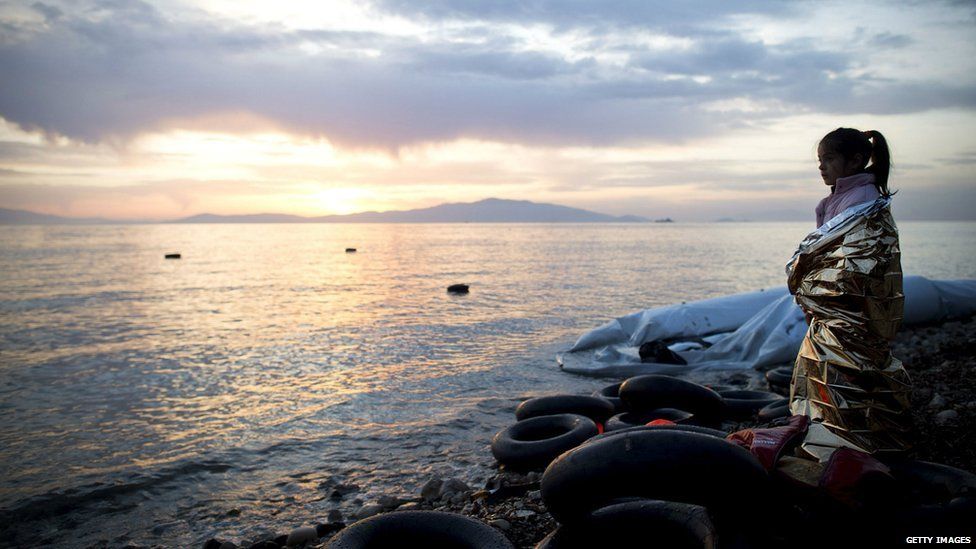 “Learning lessons from history will be painful for everybody,” says Michael.

“I think everybody [from Iran, to the US, to Europe] will have to put their hand up and say they could have done something different.

“With the region the way it is… I think that it [the situation in the Middle East] will get worse before it gets better.”

Tim says: “I think allowing thousands of men, women and children to drown in the Mediterranean Sea will be seen as one of the great crimes of the early 21st century.

“I think history will be extremely scathing about our role in that, our capacity to ignore that.”

Why was this Russian blonde fascinated with Assad? – Photos

Russia and West clash over blaming Syria for chemical use

Be the first to comment at "What will the school history books say about the Syria conflict?"