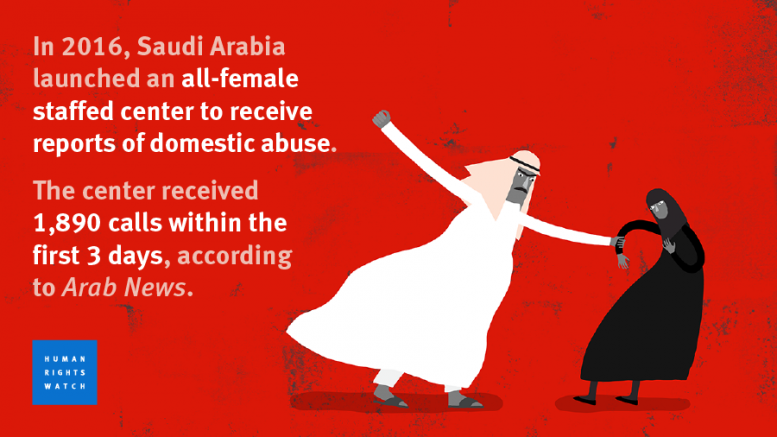 Saudi Arabia’s male guardianship system remains the most significant impediment to women’s rights in the country despite limited reforms over the last decade, Human Rights Watch said in a report released today. Adult women must obtain permission from a male guardian to travel abroad, marry, or be released from prison, and may be required to provide guardian consent to work or get health care. These restrictions last from birth until death, as women are, in the view of the Saudi state, permanent legal minors.

The 79-page report, “Boxed In: Women and Saudi Arabia’s Male Guardianship System,” examines in detail the panoply of formal and informal barriers women in Saudi Arabia face when attempting to make decisions or take action without the presence or consent of a male relative. As one 25-year-old Saudi woman told Human Rights Watch, “We all have to live in the borders of the boxes our dads or husbands draw for us.” In some cases, men use the permission requirements to extort large sums of money from female dependents.

“The fact that Saudi women are still forced to get a male guardian’s permission to travel, work, or do anything else is a long-standing rights violation and a barrier to the government’s plans to improve the economy,” said Sarah Leah Whitson, Middle East director. “The government should do itself a favor and finally listen to the demands of half its population to be freed from the shackles of the guardianship system.”

Every Saudi woman must have a male guardian, normally a father or husband, but in some cases a brother or even a son, who has the power to make a range of critical decisions on her behalf.

“My son is my guardian, believe it or not, and this is really humiliating… My own son, the one I delivered, the one I raised, he is my guardian,” a 62-year old Saudi woman told Human Rights Watch. A woman’s other male relatives also have authority over her, although to a lesser extent.

Women’s rights activists in Saudi Arabia have repeatedly called on the government to abolish the male guardianship system. In 2009, and again in 2013, Saudi Arabia agreed after its universal periodic review at the United Nations Human Rights Council.

Since making these promises, Saudi Arabia has taken steps to lessen guardians’ control over women, including no longer requiring permission for women to work and passing a law criminalizing domestic abuse. In 2013, then-King Abdullah appointed 30 women to the Shura Council, his highest advisory body, and, in 2015, women voted and ran as candidates in municipal council elections for the first time.

Despite these limited steps, the male guardianship system remains largely in place, hindering and in some cases nullifying the reforms, Human Rights Watch found.

Women may not apply for a passport without male guardian approval and require permission to travel outside the country. They regularly face difficulty conducting a range of transactions without a male relative, from renting an apartment to filing legal claims. The government does not require guardian permission for women to work, but does not penalize employers who do require this permission. Women cannot study abroad on a government scholarship without guardian approval, and a male relative must accompany her abroad while she studies, though this requirement is not always enforced. Women arebarred from driving.

Women face tremendous obstacles when trying to seek help or flee abuse by violent guardians, Human Rights Watch found. For example, a husband retains guardianship control even during divorce proceedings. There is deeply entrenched discrimination within the legal system, and courts recognize legal claims brought by guardians against female dependents to enforce their authority.

Women who have escaped abuse in shelters may, and in prisons do, require a male relative to agree to their release. “The [authorities] keep a woman in jail… until her legal guardian comes and gets her, even if he is the one who put her in jail,” said a women’s rights activist. If a guardian refuses to release a woman from prison, authorities may transfer her to a state shelter or arrange a marriage for her. Her new husband becomes her new guardian.

Human Rights Watch spoke with women who felt their only safe option was to leave the country after male family members abused and threatened them, but who were unable to convince their guardians, in some cases the abusers, to allow them to travel.

In April 2016, Saudi Arabia announced Vision 2030, the country’s “vision for the future,” which declares the government will “continue to develop [women’s] talents, invest in their productive capabilities and enable them to… contribute to the development of our society and economy.”

“Saudi women have been told for decades achieving their rights will just take time,” Whitson said. “Saudi women shouldn’t have to wait a moment longer to be treated as equal members of Saudi society.”

Quotes from the report:
The names of all interviewees have been changed to protect their privacy and security. Saudi terrorism regulations criminalize harming the reputation of Saudi Arabia, and the government has imprisoned human rights activists who have shared information with foreign organizations.

“We are entrusted with raising the next generation but you can’t trust us with ourselves. It doesn’t make any sense.”
–“Rania,” 34

“It can mess with your head and the way you look at yourself. How do you respect yourself or how [can] your family respect you, if he is your legal guardian?”
–“Hayat,” 44

“The guardianship system is always a nightmare. I don’t want to get married because I don’t want a stranger to control me… Basically, it is slavery.”
–“Tala,” late 20s

“I would rather you kill me than give the man who abuses me control over my life.”
–“Zahra,” 25

“You don’t have power over your body… It makes you nervous every step of your life. Everything that you put so much effort and time into could just end in a second if your guardian decides.”
–“Reema,” 36

“It is amazing how much we have achieved despite all the restrictions we face… Now that more women are working, I think there will be further changes. It is inevitable.”
–“Khadija,” 42

Be the first to comment at "Saudi Arabia: Male Guardianship Boxes Women In – video"