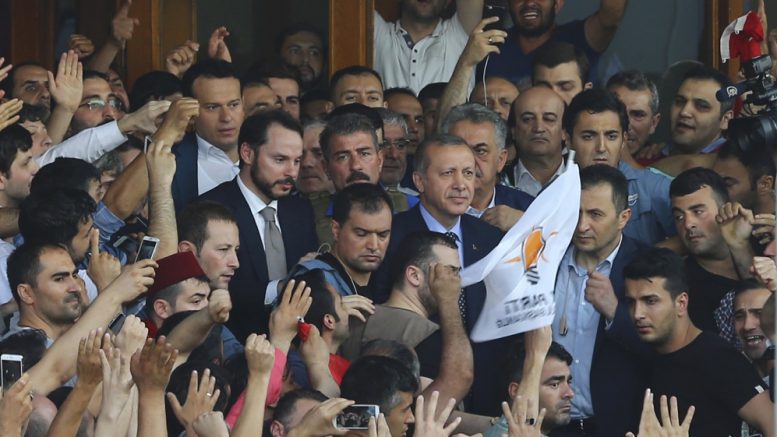 Government says 2,839 military personnel detained as coup put down despite pockets of resistance holding out in Ankara.

Turkish President Recep Tayyip Erdogan has spoken defiantly to crowds of jubilant supporters in Istanbul, vowing to stay in power hours after an army faction dramatically tried to topple the government.

Erdogan’s arrival in Istanbul from the coastal city of Marmaris came after Prime Minister Binali Yildirim told broadcaster NTV on Saturday that the situation in the country was “largely under control”.

The army’s acting chief of staff,  Umit Dundar, told a news conference that 104 coup plotters had been killed. He said that 90 other people had been killed in violence, adding that 47 of them were civilians.

Yildirim told a news conference that 1,440 people had been injured and 2,839 military personnel had been detained.

The permanent army chief of staff, Hulusi Akar, was freed by government forces having been held hostage at an army base in Ankara for a period, an official told Al Jazeera.

Speaking at a news conference, Erdogan said the attempt to push him from power was “an act of treason” and that those behind the plot would “pay a heavy price”. He said he intended to stay with his “people” and not go anywhere.

“Shortly after I left [Marmaris] I have been told they bombed the locations where I was,” he told reporters. “I assume they thought I was still there when they bombed those places.”

Speaking to thousands of supporters outside Ataturk Airport on Saturday morning, Erdogan said the coup plotters had pointed “the people’s guns against the people.

As he spoke, live footage showed dozens of soldiers involved in the coup surrendering on one of the bridges across the Bosphorus in Istanbul, abandoning their tanks with their hands raised in the air.

“Clearly the cleansing of the military from those elements who joined or supported the coup is already under way,” Al Jazeera’s senior political analyst, Marwan Bishara, said.

“This is going to continue for days to come, and I think there are probably going to be tribunals within the military to see who supported the coup.”

Greek officials said a Turkish military helicopter landed in the city of Alexandroupolis, close to the border, and that eight people had claimed asylum. Turkey’s foreign minister said the government had requested their extradition.

There were still pockets of resistance in the capital Ankara into Saturday morning, an official told Al Jazeera.

In Ankara, jets dropped bombs over the Bestepe district, where the presidential palace is located, with plumes of black smoke seen rising early on Saturday.

There were also reports of an explosion at the parliament building in the capital.

Al Jazeera’s Ece Goksedef, reporting from Ankara on Saturday morning (9am local time, 06:00 GMT), said the city had been quiet for several hours.

Military jets were still in the sky above the capital, but there has been no sound of fighting, Goksedef said, adding that there were only a few locations in the country where the coup plotters were holding out.

The prime minister said the military had been ordered by the presidency to shoot down planes hijacked by those involved in the coup attempt and that jets had been scrambled.

Officials said fighter jets had shot down a helicopter used by anti-government forces over Ankara.

Erdogan said that the attempted coup was the work of supporters of US-based preacher Fethullah Gulen, who the president has long accused of attempting to use his followers in the judiciary and military to overthrow the government.

Gulen condemned the bid to overthrow Turkey’s leader, saying “governments should be won through a process of free and fair elections, not force”, according to a report by the DPA news agency.

Earlier, thousands of people had heeded a call from the president to take to the streets and protest against the attempted coup. A similar message was recevied later in the day by many people in Turkey via SMS message, agencies reported.

‘We will overcome this’

Late on Friday, sections of the army had officially declared a coup and martial law , saying they had “taken control of the country” as Istanbul’s main airport was closed and fighter jets were seen in the skies.

Yildirim also told NTV that a no-fly zone had been declared over Ankara.

News of the attempt first broke when army factions blocked bridges, fighter jets were spotted in the skies and gunfire and loud explosions were heard in Istanbul, the country’s biggest city, and in Ankara.

The headquarters of state-run broadcaster TRT World were taken over and a presenter read out a statement from the group behind the plot, which she later said she was forced to do at gunpoint.

“We know they have been acting outside the chain of command,” Cemalettin Hasimi, a government spokesman told Al Jazeera, referring to the sections of the army behind the coup attempt.

In Gaziantep, a city in the south, Al Jazeera’s Zeina Khodr reported that supporters of Erdogan had quickly taken to the streets after he appeared on CNN Turk television urging them to do so. Cars could be seen streaming towards the airport, honking their horns.

“We will overcome this,” Erdogan had said, speaking on a video call to a mobile phone held up to the camera by a presenter.

The Russians can study in Turkey again

Be the first to comment at "Erdogan: Turkey coup bid ‘an act of treason’ latest"