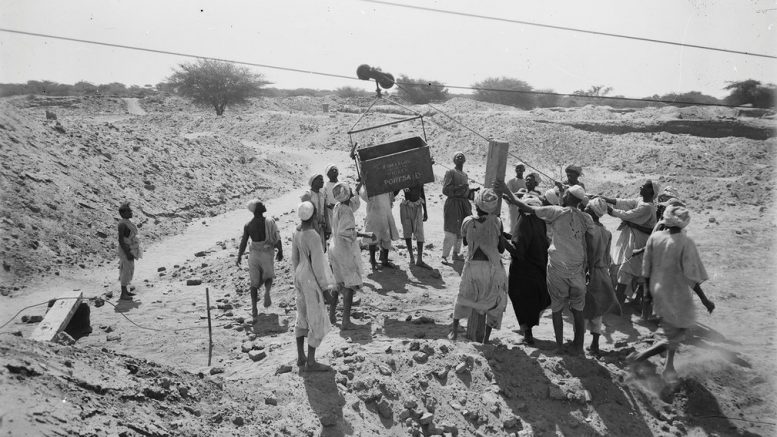 A shelter built to protect sculptures at the royal baths. John Garstang can be seen standing on a ladder at the entrance with a workman, 1912

High altar with relief featuring Hapi the Nile god, found in the central sanctuary of the Temple of Amun, 1912

Garstang was born in Blackburn in 1876, and got a scholarship to study maths at Oxford University. During holidays he indulged a newfound interest in archaeology, excavating Roman sites in Britain

Following later excavations in Egyptian sites like Reqaqnah, Beit Khallaf and Abydos, Garstang came to Meroë, an ancient city on the banks of the Nile situated in what is now Sudan

Meroë had lain undisturbed for 2,000 years before Garstang began his excavations

Female statue discovered in the palace, after restoration. A local workman holds a backcloth, 1912

Committees of wealthy individuals would fund the excavations, in exchange for being able to keep objects found by Garstang and his team

Remarkable discoveries were made, like the decapitated head of a bronze statue of Roman emperor Augustus, sacked from a raid on Roman garrisons further north in Egypt

Traditional east African Tukul house, near the site of Meroë, 1910

The head was buried underneath a doorway to a building thought to be a victory monument or temple – in walking over the head, Meroites would effectively reiterate their victory. The piece is now owned by the British Museum

A steam train passing Garstang’s camp at Meroë, visible in the background, 1911

Garstang also discovered brightly coloured frescoes, though these were destroyed a few years later after the building he stored them in was damaged in a storm

Upper fragment of a stele (inscribed stone) in Meroitic script, found at the lion temple, 1910

Lion imagery was prevalent, including in a temple adorned with the lion headed god Apedemak

Garstang and his wife Marie examining statue fragments in the tank at the ‘Royal Baths’, 1913

Aerial railway in use at the site. Widnes and Port Said can be seen written on the box

Following his Egyptian work, Garstang went on to make major excavations in Israel, heading Jerusalem’s British School of Archaeology, and Turkey, the latter completed after the second world war halted his progress. He then founded the British Institute of Archeology in Ankara

400 commodities still banned from entering into the Gaza Strip

Be the first to comment at "Sanda of time, 1910: Difficult living conditions in ancient Egypt – In photos"