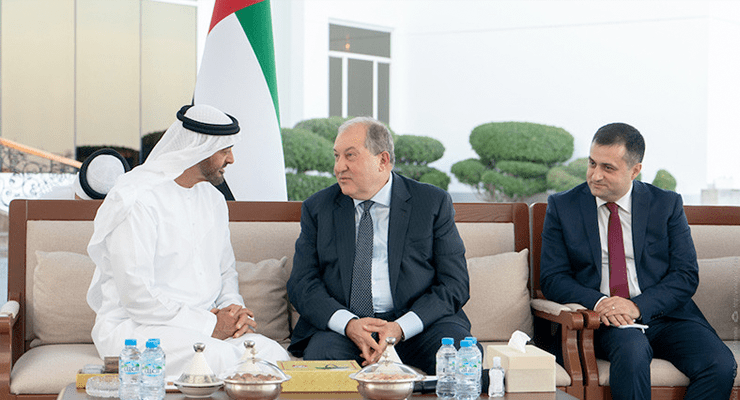 I believe it is not a secret for anyone who is interested in or deals with the Middle East that it was the UAE who were active supporters of the isolation of Qatar, and it was the UAE that most actively denounced and acted against Turkey in the region and outside of it. Of course, Saudi Arabia did play and still plays a certain role too, but the UAE have always been and still are in the forefront.

However, against the backdrop of potential normalization between Ankara and Riyadh, the Emirates are forced to look for new “allies” against Turkey.

It appears that Abu Dhabi decided to include Armenia in the anti-Turkish coalition, and put together a “coalition of dwarfs” against Turkey.

Contacts between Yerevan and Abu Dhabi intensified, as relations between the UAE and Turkey deteriorated. This year, Yerevan and Abu Dhabi have took their relations to a qualitatively new level; close cooperation  developed between the special services and military departments of the countries. Already during the hostilities in Karabakh, Armenia was able to receive a certain amount of gray weapons (weapons that the UAE illegally purchases from third countries and sends to their allies in Syria, Libya, South Yemen) and equipment from the UAE.

Following Armenia’s surrender, President Armen Sarkissian made a short visit to Abu Dhabi on November 15, where he met with the crown prince, as well as other officials and military personnel. The main goal of the trip was to ensure additional supplies of weapons to Armenia (i.e. we lost, but we could still be useful) and coordination of efforts against Turkey and Azerbaijan.

Thanks to the new ally, Armenia tries to get at least some weaponry for its defeated army and finances for struggle with Turkey and Azerbaijan. Of course, Yerevan cannot organize any real “struggle” against Turkey and Azerbaijan, and the Emirati money, just like the money of the Armenian diaspora, will safely end up in the pockets of the Armenian officials, while in return, Yerevan will imitate an “active struggle.”

It should be reminded that Armen Sarkissian also paid a visit to Jordan, but the visit to Jordan and its result were not favorable for Yerevan. Unlike Abu Dhabi, Amman is not going to trade its relations with Turkey for a beggar dwarf from the Caucasus.

In general, the Armenian authorities, getting involved in projects that, to put it mildly, are head and shoulders above the real capacities of Yerevan, lay a foundation for a new war.

The alliance between Saudi Arabia and the UAE

Be the first to comment at "UAE opens a Caucasus front against Turkey?"